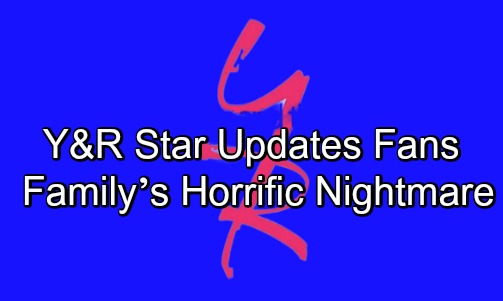 The Young and the Restless (Y&R) spoilers reveal that things are looking up for one CBS soap star and his family. Daniel Goddard (Cane Ashby) recently shared some horrible news with his fans. On his social media accounts, Goddard posted pics of his hospitalized father. He explained that his dad had taken a nasty fall and asked his supporters to offer their prayers.

Thankfully, Goddard’s father seems to be doing much better. The actor posted some updates on Instagram and thanked everyone who reached out to him. For many fans out there, soap characters almost feel like beloved family members. That naturally makes them connect with their portrayers as well.

When Goddard’s crisis hit, he received an outpouring from The Young and the Restless viewers. He didn’t want to leave everyone hanging, so he put up a new pic and filled Y&R watchers in. Goddard’s father still has some terrible bruising, but he’s on the mend. The important thing is his brain’s no longer bleeding.

“After 3 emotional days the bleed on my dad’s brain has stopped and he is now conscious and talking,” Goddard said. “Thank you from the bottom of my heart to everyone for your thoughts, love & prayer! I don’t have the words to tell you how much it has touched my entire family! #ThankYou #Grateful #Love”

It’s clear that Goddard appreciates his fans and how they much they care. Everybody’s thrilled now that Goddard’s pop is on the road to recovery. Let’s hope he stays on this path during the remainder of his hospital stay. Y&R viewers certainly wish all the best to Goddard, his father and the rest of their family.

As for what’s ahead in Genoa City, Cane will face a different type of crisis. The Young and the Restless spoilers say the pressure will drive Lily (Christel Khalil) over the edge next week. Can Cane help Lily get a grip and stay focused? We’ll keep you posted as other Y&R details emerge. Stick with the CBS soap and don’t forget to check CDL often for the latest Young and the Restless spoilers, updates and news.

After 3 emotional days the bleed on my dad’s brain has stopped and he is now conscious and talking. Thank you from the bottom of my heart to everyone for your thoughts, love & prayer! I don’t have the words to tell you how much it has touched my entire family! #ThankYou #Grateful #Love