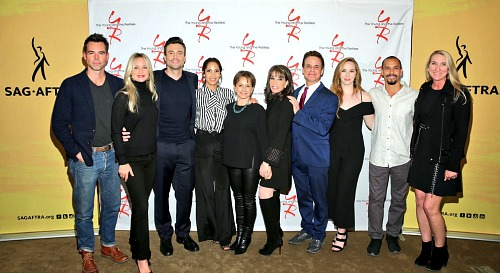 The Young and the Restless (Y&R) spoilers reveal that the CBS soap just received a big honor. Since Y&R recently had its 45th anniversary, a special event was held to celebrate the wonderful actors who keep fans tuning in. They’ve got a huge team backing them up behind the scenes and that’s fantastic. However, the stars are the ones people want to hear about!

SAG-AFTRA had a fun panel on hand for this bash in Los Angeles. Christel Khalil (Lily), Daniel Goddard (Cane), Christian LeBlanc (Michael), Sharon Case (Sharon), Camryn Grimes (Mariah) and Kate Linder (Esther) were all part of an exciting Q&A session. Mal Young, Y&R’s head writer and executive producer, was also there to support them in the audience.

Soaps.com shared some tidbits from the fascinating interviews. These Young and the Restless stars covered a wide range of topics, but there was one that really stood out. Several cast members revealed some shocking fan encounters. Some had to deal with viewers who were just a bit too wrapped up in fiction. Others became freaked fans themselves thanks to sudden celebrity sightings.

Camryn Grimes recalled her younger days when she played Cassie. She noted that people would camp outside the hotel when the Daytime Emmys were held in New York. “I was little and my grandparents took me out and we were pushing people away,” Grimes said. She suggested that it was pretty overwhelming at the time!

“All of sudden I was being dragged down the street,” Grimes added. “I look and there’s a woman holding my arm, saying, ‘Cassie, Cassie, I have to tell you something. Sharon is your real mother, but it’s OK, I’m going to be your real mother now.’” Grimes indicated that security had to come and drag the woman away, so that was certainly a wild fan moment.

Kate Linder is also a flight attendant for United Airlines, so she recalled getting recognized on a particularly memorable flight. Two passengers were being taken off the plane for transporting drugs, but they just had to stop and stare. Linder said they asked if she was Esther from The Young and the Restless, so cast members can get recognized just about anywhere.

Finally, Sharon Case admitted she’s been guilty of being a fan girl. She mentioned that she once ran into Alexander Skarsgård outside a steakhouse. Case was a bit tipsy that night, so she confessed she might have gushed too much.

“I was watching True Blood at the time and I was absolutely in love with him and his vampire character,” Case said. “I made a fool of myself and he politely waited for me to finish.” It’s nice to know that even soap stars have the occasional celeb freak-out.