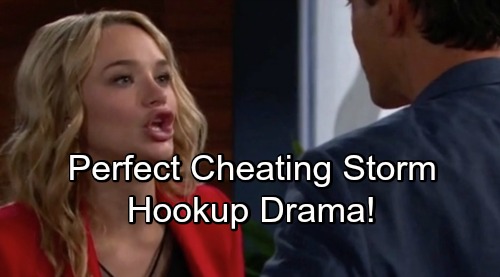 The Young and the Restless (Y&R) spoilers tease that Billy (Jason Thompson) could be driven to his breaking point. Y&R fans know that Ashley (Eileen Davidson) and Kyle (Michael Mealor) are plotting against him. They don’t trust Billy to run Jabot, so they’re hoping to sink him fast. Kyle and Ash will have to play dirty to make that happen, but they have no other choice.

Even if Ashley backs out in the end, Kyle definitely won’t give up on his goal. The Young and the Restless spoilers say he’ll move forward with his plan next week, so Billy had better watch out. There’s a good chance Billy will indeed lose the CEO spot. That should leave him in an awfully dark place. He’ll be vulnerable, so Summer (Hunter King) could gain the upper hand.

Phyllis (Gina Tognoni) has been supporting Billy over Lauren (Tracey E. Bregman), but what if she changes her tune? Thanks to Ashley and Kyle’s manipulation, Phyllis may argue that Billy needs to step down. She could suggest that his job is fueling his gambling addiction, which tends to be a sore subject for Billy. He doesn’t like it when Phyllis tells him how to handle his risky desires.

Billy could have another fight with Phyllis and ultimately lose his Jabot position. Enter Summer for some smooth seduction! She’ll certainly be fired up when she returns from that forced cruise. Summer should be more determined than ever to get Billy in bed.

Does Phyllis actually think a little boat ride will take care of her problem? There’s no way Summer’s backing down now, so Phyllis’ efforts could backfire. Summer has had plenty of time to stew and scheme. She’ll hit Genoa City like a hurricane soon enough, so Billy and Phyllis should be her first victims.

Nick (Joshua Morrow) and Sharon (Sharon Case) could get pulled into this as well. Summer was paid off by her dad, but she could still spill his hookup secret. She’s already got the money, so what’s stopping her? Loyalty isn’t Summer’s strong suit, so she may use this as some last-ditch ammo. If Summer blabs at the ideal moment, Billy could cave in and have sex with her.