The Young and the Restless Spoilers: Breaking News – Judith Chapman Returns To Days of Our Lives In Exciting New Role

BY hellodrdavis on September 30, 2018 | Comments: Leave Comments
Related : Days of Our Lives, Soap Opera, Spoiler, Television, The Young and the Restless 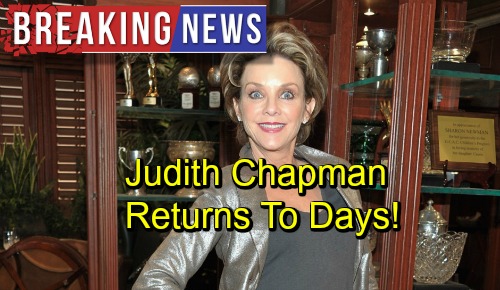 The Young and the Restless spoilers is pleased to report that a Y&R star will soon be doing double-duty on Days of Our Lives. Judith Chapman, who portrays Gloria Abbott Bardwell on Y&R, has started filming at Days of Our Lives in the new role of Diana Cooper, Leo’s (Greg Rikaart) mother.

But Y&R fans shouldn’t worry. Judith is not leaving her recurring role as Gloria on Y&R. She’ll be appearing on both Y&R (as Gloria Bardwell) and Days of Our Lives (as Diana Cooper) for the foreseeable future.

Interestingly, in both roles, she’ll portray the mother of characters played by actor Greg Rikaart. Greg has appeared in the recurring role of Kevin Fisher on Y&R since 2003, and he also set to reprise his role as Leo on Days this fall. The pair will be mother/son duo Gloria and Kevin on Y&R and Diana and Leo on Days.

The role of Diana Cooper will not be Judith’s first on Days of Our Lives. Fans will remember that she portrayed Angelica Deveraux on Days from 1989-1991, long before Angelica’s death last year when she was portrayed by Morgan Fairchild.

It will be interesting to see how Diana Cooper enters the Salem scene and what her objective is. Of course, Leo is a con artist and former escort, so one wonders whether the apple fell far from the tree. Diana could certainly cause trouble for Will (Chandler Massey) and Sonny (Freddie Smith) and reignite their worries about how they covered up Leo’s alleged death.

Of course, now it seems that Leo is alive and well, given that Greg Rikaart is back filming at Days. We’ll see what he and his mother have cooked up for everybody.

Are you excited to see Judith Chapman in her new role at Days? Stay tuned to the CBS soap and don’t forget to check CDL often for the latest Young and the Restless spoilers, updates, and news.