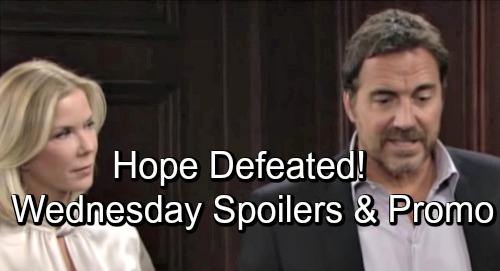 The Bold and the Beautiful (B&B) spoilers for Wednesday, September 19, tease that Steffy’s (Jacqueline MacInnes Wood) updates will irk Hope (Annika Noelle). She won’t be pleased to hear that Sally’s (Courtney Hope) joining Steffy’s team. Hope will voice her displeasure and argue that Steffy’s moving in on her territory. Sally was supposed to be working on the Hope for the Future instead.

However, Sally will pipe up to defend Steffy’s decision. She’ll defend her own choice to join the intimates crew as well. Sally will point out that she has plenty of experience, but it’s been going to waste at HFTF. She’ll state that she had her own line and ran her own company. Sally will think her talent’s been squandered by Hope, who refused to appreciate her or give her a real shot.

Of course, Hope will argue that Sally only has herself to blame. She’ll think she had to be wary since Sally once stole from Forrester. Sally faced some hurdles at Spectra Fashions, so Hope may contend that she’s not exactly a success story. Bill (Don Diamont) was responsible for most of Sally’s problems, but Hope probably won’t care about that.

Nevertheless, Steffy will maintain that everyone deserves a second chance. As Hope becomes increasingly agitated, this argument will turn vicious. The Bold and the Beautiful spoilers say Hope and Steffy will attack each other over their pasts and core values. It sounds like this will become a real B&B showdown!

Meanwhile, Xander (Adain Bradley) will offer an explanation to Zoe (Kiara Barnes). He’ll be helping out as a model, so he’ll tell the surprising story of how he got the job. Zoe will be excited to work with Xander and hopefully pull him closer. You can bet she’ll make another move as soon as possible.

Over with Justin (Aaron D. Spears), he’ll warn Bill about the consequences of Thorne (Ingo Rademacher) and Katie’s (Heather Tom) engagement. Justin will insist that if this marriage happens, the judge could view Thorne and Katie’s home as the more stable one. Bill will decide they have to fight harder if they want to win the looming battle.

Ridge (Thorsten Kaye) will definitely be keeping an eye on the threat. He’ll tell the Forrester Creations gang that Bill may be up to something. As a result, Ridge will cook up a plot of his own! We’ll keep you posted as other Bold and the Beautiful news comes in. Stay tuned to B&B and don’t forget to check CDL for the latest Bold and the Beautiful spoilers, updates and news.