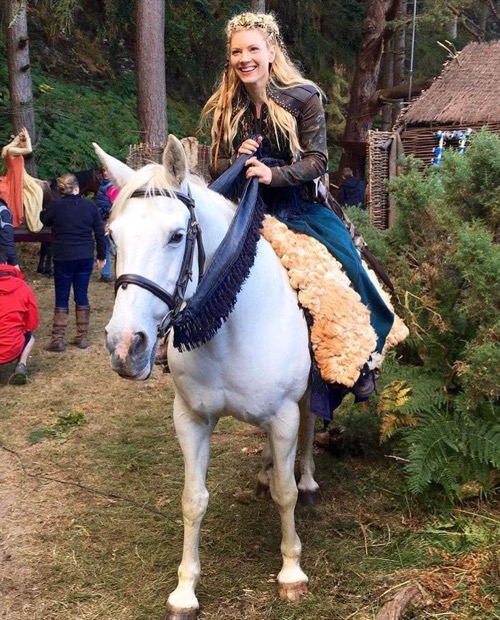 Tonight on the History Channel Vikings returns with an all-new Wednesday, January 24, 2018, season 5 episode 10 Finale called “A Simple Story and we have your weekly Viking recap below. On tonight’s Viking season 5 episode 10 episode as per the History synopsis, “A sense of doom looms over Kattegat as bloodshed ensues, but as the defeated army flees in the face of the victors, a legendary warrior makes his way home.”

The Vikings Finale begins tonight with several of the different warriors singing to their gods, as the fog rolls in and they prepare for the biggest battle of their lives. Bishop Heahmund (Jonathan Rhys Meyers) kneels and prays to his God as well. The drums sound as Queen Lagertha (Katheryn Winnick) leads her army with Bjorn Ironside (Alexander Ludwig) and Ubbe (Jordan Patrick Smith) by her side; she has black paint over her eyes as they stand at the top of the hills overlooking the French soldiers lined with Ivar the Boneless (Alex Hogh Anderson). She raises her sword from its sheath and drops it.

Lagertha is sitting in the forest and kisses a necklace she is holding when Bishop Heahmund approaches her. She says if they live, they might find some happiness but if they die, she doubts she will ever see him again; as he will be in his heaven which is not part of this world. He has no intention of dying, She finds it hard to believe that he still thinks it is up to him whether he lives or dies but thinks she might die today. She asks him to kiss her one last time, he does and she says “now I can die!”

We return to the battlefield, where Hvitserk (Marco Ilso) is screaming as he kills people. He flashes back to when Ivar is asking him what he fears most. Ivar feels he regrets jumping out of Ubbe’s ship that day to stay with him, but Hvitserk says his only regret is not having any children, jokingly he says him and Ivar are in the same boat in that sense. Ivar says that is nonsense, as he will have children and his children will populate the earth; when Hvitserk laughs, Ivar grabs his hair; but quickly apologizes saying he is anxious about the battle and tells him he is sorry Hvitserk jumped ship as he regretted it ever since. Hvitserk finally admits that he regrets it sometimes and Ivar feels he never loved him; their disagreement is interrupted when King Harald Finehair (Peter Franzen) calls them, saying the war drum is sounding.

Hvitserk is laying on the battlefield wounded and keeps looking back to the moment when Ivar has the knife to his throat and how Ivar feels he regrets being at his side. He jumps back up and ready to fight when the next warrior he faces is his brother Ubbe. Ubbe swings his sword but stops it at Hvitserk’s neck, he shouts and is about to do it again but cannot bring himself to killing his own brother. He turns around and kills another Vikings warrior as Hvitserk looks on.

Bjorn thinks of Snaefrid (Dagny Backer Johnsen), who he just married and left with her father. She is tiny but quick as she is able to hide among the trees and able to kill many of the enemies but she is devastated when she finds her father killed, and is quickly murdered herself. Bjorn sits with Halfdan the Black (Jasper Paakkonen), saying he heard him singing with his brother, and this must be hard for him. Halfdan admits he owes his brother much but owes Bjorn far more, and if he has to die today, he is ready for Valhalla.

Back in the fight for their lives, Halfdan hears as it is Viking versus Vikings; suddenly it is complete silence and he is back in the sandy desert. He grabs fists full of sand but comes back to reality and begins to fight again. He flashes between being in the desert alone and sitting in a green field alone. He kills a shield maiden and then faces his own brother, King Harald who shouts at him that he didn’t want to kill him. Harald swings his sword and hits him right in the neck; Halfdan kisses his ax as he says, “This is life and this is death brother.” Harald tells him he will see him in Valhalla and holds him to the ground. King Harald returns to the war.

Margrethe (Ida Nielsen) goes into the water and retrieves a block of wood. She lays ie before Torvi (Georgia Hirst) and Bjorn’s children and tells them, “This one is dead. Soon they all will be dead!” and walks away from them.

The Bishop fights alongside Lagertha. King Harald asks Astrid (Josefin Asplud) to cut his hair. She hesitates, but he says that now that the woman of his dreams has married him, she should cut it. She isn’t happy, even after she has cut it so he pleads with her to tell him what saddens her; with her face half painted blue, she tells him she cannot.

Lagertha watches as the battle is vicious. Torvi turns just as Hvitserk kills Guthrum (Ben Roe), she can’t believe he would kill her and Bjorn’s “son”. Lagertha flashes back to when she was a child, and her father was reassuring her that the gods would take care of them, and he gave her the necklace with the hammer on it for Odin to always take care of her.

Astrid sits among the warriors by the fire ans Lagertha is suddenly alone in the green pasture. Astrid walks up with her shield and sword. Astrid drops them, telling Lagertha to kill her, or else they will kill her; Lagertha reveals that she knows she didn’t betray her. Astrid says she has to die because she cannot have this child. Lagertha is shocked that she is pregnant and looks back at the battle and all the dying Vikings, she sticks her sword through Astrid’s belly and holds her as she dies. Lagertha kisses her, saying may Freya lift you up and take her gently to her home.

In the new world, Eyvind (Kris Holden-Ried) is laying his son in the boat for the ceremony, after he was murdered for the fire of the temple. Floki (Gustaf Skarsgard) approaches him, saying he knows his sadness, as he lost his only child and then his wife. He promises him that he doesn’t fool him and his sole desire is to give them the chance of a whole new world; he begs him to listen and not avenge the death of his son because if he does, then he will set in motion a cycle of revenge that will never end; just like the war that is happening now in Kattegat, the hopes and dreams of a new and different world will be gone forever. He tells him he can have all the power and authority he wants on the condition that they will not have that same cycle of violence here in the new world.

Ivar and his army scream as he throws his crutch and he asks if they are afraid of death. He is sure they don’t intend to die as old men and victory is so much better when it is a hard battle to win. He reminds them that Vahalla awaits them and sends the Viking warriors ahead. Ivar does not want to forget the real reason they are going into battle this day – Lagertha! Bishop Heahmund sees Ivar’s face and nods to him, but Ivar can only see Lagertha and skeletons fighting all around her, she looks at him and points her sword at him. Bjorn looks towards him and everyone on the field shoots their arrows towards Ivar and his men, Ivar just shouts as they fly in the air at him.

Margrethe visits the Seer (John Cavanagh), who says he has also seen that the sons of Ragnar (Travis Fimmel) are dying. He says even the gods are weeping. He calls her “Slave Girl” and Ubbe will never rule Kattegat and she will never be Queen. She insists he doesn’t know everything and she has both of Bjorn’s children in his care and if she kills them, then Ubbe will be closer to the crown. He says that is true, but he says Ubbe won’t be the ruler of Kattegat but doesn’t want to be dug up by mad people anymore. He implies that mad people might inherit the earth.

Bjorn fights hard in the field as he remembers kissing his wife as he bends down and hugs Guthrum, saying he will get to live in Valhalla, with his brave and great father. He takes the ax out of his chest, yelling for them to use their arrows to kill the others. Ivar shouts as the arrows fly towards him; Bjorn looks shocked as Ivar smiles and laughs as he calls for his French and Viking warriors to attack. Lagertha and Harald run back hopelessly towards their own people.

Ivar watches as the day comes to an end. He talks to himself, calling Lagertha a coward, begging her to come and fight him.

Aud the Deep-Minded (Leah McNamara) finds Floki and brings him to the hot springs, and shows him a body inside. Floki goes to see Ketill Flatnose (Ada Copeland) and his family, revealing to him and his family that his son is dead. Eyvind watches from his home.

The dead bodies are everywhere in the forest too. Bjorn finds his dead wife. In the New World, Floki says he knows too well what is going to happen next. He tells them this is not how he imagined everything, and there is no doubt he is a fool. He says they have failed the gods by behaving like humans. They gave them every opportunity be to be better and have failed, the only way they can fix things is to offer a sacrifice, something special and suggests that he offers himself as the sacrifice; everyone is shocked as he walks away.

Bjorn is shattered as he returns to Kattegat. Torvi calls for Margrethe, asking for her children; she takes her sword out of her sheath but walks into the room and finds them quietly in the room. Bjorn tells Ubbe to gather his things as they don’t have long. He finds Lagertha sitting in the corner quietly.

A French ship is coming to the harbor and Rollo (Clive Standen) is in it.