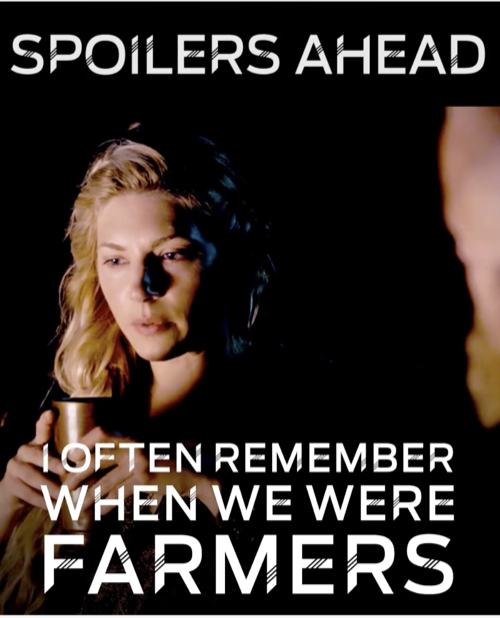 Tonight on the History Channel Vikings returns with an all-new Wednesday, January 10, 2018, season 5 episode 8 called “The Joke” and we have your weekly Viking recap below. On tonight’s Viking season 5 episode 8 episode as per the History synopsis, “The battle for Kattegat begins, and as the two armies line up to fight, the Great Heathen Army must decide between a final plea for peace or all-out war. Meanwhile, Floki faces discord among the settlers.”

Hvitserk (Marco Ilso) lifts his brother Ivar the Boneless (Alex Hogh Andersen) onto the boat as he excitedly announces he can fulfill his promise to the gods that he will kill Lagertha (Katheryn Winnick); Hvitserk admits he is ready to avenge their mother, not because she was a good mother to him but because Lagertha deserves it. Ivar wonders if he is ready to kill Ubbe (Jordan Patrick Smith), but he assures him he will.

King Harald Finehair (Peter Franzen) asks Astrid (Josefin Asplund) what she is doing, as she is loading one of the boats. She says even if she is carrying his child, she is still coming with him. He figures he should have known better, and agrees that she can sail with them. Ivar calls over Bishop Heahmund (Jonathan Rhys Meyers), referring to him as “Your Grace,” which the Bishop finds offensive. Ivar gives him back his own sword, saying it only works its magic for him, so he may have it.

In Kattegat, Lagertha walks with Bjorn Ironside (Alexander Ludwig), Halfdan the Black (Jasper Paakkonen), and Ubbe towards the ships. Bjorn approaches Guthrum (Ben Roe) and tells him it is a proud day when a father takes his son to battle. He leaves without saying anything to Torvi (Georgia Hirst) or his other children, but does kiss Snaefrid (Dagny Backer Johnsen) goodbye.

Torvi hands her children to Margrethe (Ida Nielsen) promising them she will come back for them soon; Ubbe kisses Margrethe’s forehead and walks with Torvi towards the ships. With Lagertha in the lead, and Bjorn right behind, the warriors and shield maidens of Kattegat leave, prepared to do battle.

Floki (Gustaf Skarsgard) watches as the Vikings who went with him toil on the land he brought them to. They sit as he talks about the food they eat, water to drink and they all have reason to be satisfied with what they have achieved so far. He says they need to build a temple since the gods have been so good to them and suggest Thor, god of the farmers, should be the main god of the temple and on the altar, they should make a fire that should never go out.

Aud (Leah McNamara), say they must do it to give credit where credit is due and Kjetill Flatnose (Adam Copeland) says they can build it on his land, and he will care for it. Eyvind (Kris Holden-Ried) objects but Aud says her father is doing nothing more than offering his services to their community, but Eyvind says Flatnose is only trying to lick Floki’s ass. He warns that when they have finished eating all of their animals before the harsh winter, what will they do? Why should they build a temple before their own houses?

Asbjorn (Elijah Rowen) feels they have come there to die and is negative like his father but Flatnose says they came there to build something wonderful, and to live. They are there to praise the gods and Floki is right about that. Eyvind says the child that is to be born is his grandchild and he sees no future for it; and none of them can sail back. By following him here, they have abandoned their home and their queen and can never go back. Aud says they must make the best of it, tolerate and love each other. Put the settlement first.

On the field, Lagertha stands looking at Astrid, while King Harald looks at his brother, Halfdan; Ubbe looks sadly at his brother Hvitserk and the Bishop as Bjorn looks murderously at Ivar. Lagertha says “this is not right that the sons of Ragnar would try to slaughter each other, suggesting they send emissaries; Bjorn and Halfdan meet with Hvitserk and King Harald. In good faith they exchange brothers, saying they will fight if they have to.

Lagertha, Ubbe, and Bjorn question Hvitserk about the Bishop Saxon being in their camp. Lagertha tells him they want to avoid slaughter and asks for his help. King Harald wants to know why Halfdan would fight for Lagertha and Bjorn and Ivar says he gives too much importance to Bjorn saving his life. King Harald says he doesn’t want to kill his brother. Ivar says he only cares about winning this war and tells him he has to choose between a friend and a brother and the answer should be obvious. Bishop Heahmund begins to pray to God about the war upon them.

Ubbe warns Hvitserk not to sacrifice his life for Ivar’s. He doesn’t want to meet him face to face in battle and kill him; he pleads with him to stay. King Harald begs Halfdan to do the same thing,

The following morning, there is a meeting between Bjorn, Lagertha, Ubbe and Hvitserk, King Harald and Ivar. Bjorn and Ubbe want a peaceful resolution. Lagertha says she is the rightful Queen of Kattegat and they should be discussing how to combine their great armies and how to direct them to new lands, conquests, and new opportunities. She feels its a pity to kill their young men for a piece of land that is already theirs.

Lagertha is happy to see Astrid and doesn’t want to fight with her. Astrid informs her she is married now and is King Harald’s wife. Lagertha calls her Queen Astrid now. Halfdan doesn’t want to fight but King Harald says they can gain the world. Bjorn says it is up to Ivar, and if they unite as brothers, they can make an accord and King Harald could never stop them. Ubbe pleads for Ivar not to do this because of their father Ragnar. Ivar stands up in front of Lagertha, says brings hoards of meat, saying they will celebrate as there will be no battles today nor tomorrow, as he will not fight against his brothers as he still hates himself for killing Sigurd. He doesn’t want to kill Lagertha, saying she can have it. He walks to Ubbe, saying they will be all right, as they are all songs of Ragnar and asks him for forgiveness.

While they share a celebratory drink, Ivar throws his drink in Ubbe’s face and says he can never break a promise. He shoves Ubbe asking how he can forgive her for killing their mother and promises he will kill Lagertha. She pours out her drink and tells Ivar he can try! Ivar tells Ubbe he is no longer his brother, he was once his legs but he isn’t anymore. King Harald starts to laugh as Ubbe says this was a waste of time.

Ivar says she can surrender Kattegat now. He tells them not to put their men to the test, they can just leave this place, but everyone draws their swords. Lagertha holds Ubbe back and says “not now!” Both armies retreat, knowing the great battle is coming, but not before King Harald notices how Astrid and Lagertha look at each other. King Harald asks Halfdan if he is sure and he tells him that Bjorn saved his life. Harald punches him and promises to kill him.

King Aethelwulf (Moe Dunford) is sparring while Judith (Jennie Jacques) talks to Alfred the Great (Fredia Walsh-Peelo) about his journey. He said he wasn’t impressed and said they should teach more in English, than in Latin. He says the Abbott was too set in his ways to listen. Alfred talks about how they can prepare for another Viking attack and they should build a Navy; Judith suggests he talks to his father about that, feeling it is a good idea, but Alfred feels he won’t listen because he is too busy teaching his brother, Aethelred (Darren Cahill) to be king.

Flatnose talks to Aud, saying it appears that Eyvind and his family truly don’t want to be involved in this community. She feels back for Floki because it was his hope that brought people to this island.

Ivar and Bishop Heahmund agree that today is the day the Lord has given them to take the blood of many Pagans. The two great armies are setting up when King Harald asks Ivar what he is thinking. He thinks that Bjorn could possibly be keeping part of his army reserve, and suggests holding back a third of their army to protect their boats. King Harald forces Astrid on Ivar’s chariot as she protests that she wants to fight. King Harald and Bishop Heahmund proceed forward together, Heahmund, kneels and prays as Bjorn shouts that this is in the name of Odin and the name of his father – the battle begins.

Ivar stops as he hears the army cries, he needs to know if he is right or wrong as Hvitserk and his men are ambushed in the woods, just as Ivar suspected. His group fire off arrows but the people just disappear into the bushes. Hvitserk orders his group to get back but they are taken by a mysterious group with reeds and darts, and nooses in the trees.

King Harald suddenly sees Lagertha and her group of warriors coming from the rear and he tells his men to face the rear as Bjorn rushes from the front. Astrid wants to go but Ivar tells her they should wait, as good things happen to those who wait. The horn sounds and Astrid tell Ivar they need them but suddenly the horn stops.

Astrid says they need them to Ivar but he shouts at her that it is too late. The battle is gruesome as it appears most have gone down. Suddenly the Bishop is struck down and King Harald is shouting for everyone to retreat. Ubbe, Bjorn, Lagertha, and Torvi watch as King Harald and his few remaining warriors rush off. Harald informs Ivar that they lost and that his Christian Heahmund is dead. Hvitserk joins him on his chariot and he rides off angrily towards the ships.

Lagertha finds Heahmund’s sword and learns he is the Saxon priest. She turns him over and learns he is alive. Ubbe is about to kill him and Lagertha orders him to save him; she doesn’t know why but thinks maybe the gods know why. They carry him off the battlefield to see if they can save his life.