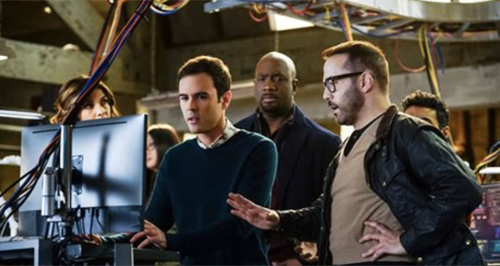 Tonight on CBS their new crime drama Wisdom of the Crowd  airs with an all-new Sunday, January 14, 2018, finale episode and we have your Wisdom of the Crowd recap below.  On tonight’s Wisdom of the Crowd season 1 episode 13 “The Tipping Point,” as per the CBS synopsis, “In the Season 1 finale, Cavanaugh investigates the murder of a top Sophe user who filled his basement with conspiracy theory evidence. Also, Alex attends the release hearing for Carlos Ochoa, the man convicted of killing Mia.”

It is Tommy’s day off. He is called to a scene where there is a dead body in a living room. In the basement, walls filled with SOPHE cases and one that explores the theory that Mia was possibly killed to control Jeffrey. Tommy calls Jeffrey to come and see it right away.

Jeffrey arrives at the scene and takes a look around. He calls into the team.  The dead man, Carl Bullock, must have been chasing something that got him killed. They need to figure which case and who did it.

Jeffrey and Tommy sit down to talk to Mrs. Bullock. She has been separated from Carl for the last 4 years. She still loves him but in the last years, he became obsessed with conspiracy theories following the death of their son who died in a car accident. Since the launch of SOPHE, he made it his life. Jeffrey asks her if her dead husband had a lead or a tip about Mia. She explains that she stopped listening to his theories.

In the basement, the team gets to work cataloging Carl’s files and photos. They notice some files are missing.

In court, Alex works with Mrs. Ochoa to see that her son Carlos gets another trial now that the photo they have discovered proves his innocence. He didn’t kill Mia. The judge is reluctant and wants 24 hours to make a decision.

The team loads all of Carl’s files upon SOPHE except for the missing ones. Jeffrey wants to know more about the missing files. Tommy shows up. He has nothing on Carl’s death. His estranged wife has an alibi and Tommy doesn’t have anything to go on. Jeffrey is upset. SOPHE alerts them. Carl’s theories have created a strange list of possible incidents to look into that don’t make sense. Like the mayor is a reptilian with mind control. Jeffrey wants to know what the team did when they added all of his files. He demands they run it again and do it right this time.

Sara is mad at Jeffrey for the way he is acting. She tells him that the team added the data correctly. She warns him not to get stuck in the hall of mirrors like Carl Bullock did. Meanwhile, Tommy stops by the mayor’s to talk to him about Carl. He appears to be a dead end.

The team tries to piece together where Carl was for the last 72 hours. Alex shows up to see Jeffrey with their lawyer. They talk over the Ochoa case.

The team talks to a couple SOPHE users who have tips on the whereabouts of the mayor. He recently checked into a motel. Tommy and Jeffrey head there and see the mayor and Mrs. Bullock heading into a motel room after hugging outside.

Tommy calls Mrs. Bullock into the station. She admits she was sleeping with a married man but doesn’t know anything about Carl’s death. Jeffrey talks to Mrs. Bullock while Tommy questions the mayor Simko and his lawyer. The mayor’s alibi seems shady, Jeffrey notes to Tommy.

In court, Jeffrey shows up. He insists the judge be released from the case. The judge had stocks in Jeffrey’s old company. When Jeffrey left, they plummeted. The judge denies it all. Alex begs for Ochoa to be let go.

The SOPHE team has done some research on Simko’s whereabouts. He used his toll pass when he said he was working late at the office. Tommy and Ruiz head to see Simko’s. It is too late. He is dead in his garage after sitting in his running car with the door shut.

Tommy and Ruiz go over the Simko’s death timeline. None of it makes sense. They bring it to the team. Tommy thinks he knows who killed Simko, his coworker, Joel. Tommy calls him in for questioning. He knows that Joel was fixing city bids. Carl figured it out so he killed him. Then Joel killed Simko when he found out about the bids.

Alex and Jeffrey watch Ochoa’s release and the happiness he and his family share. Alex goes to see them. Jeffrey is too sad. He gets out of the car and walks back to his house and works more on Mia’s case. Sara shows up. She has talked to him about this before. He shouldn’t be pushing them out. They all want to help. So they do, putting Jeffrey’s board online with all of the connections they have made. He watches it go live with the team behind him and Alex and Sara right next to him.