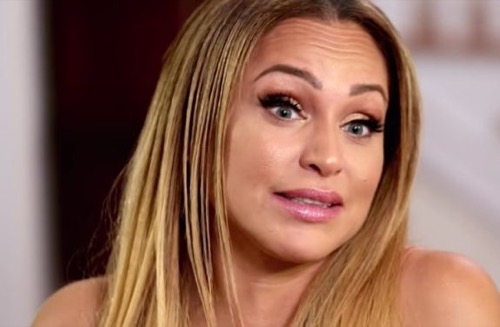 Tonight on TLC their popular reality show 90 Day Fiance: Before the 90 Days airs with an all-new Sunday, September 1, 2019 episode and we have your 90 Day Fiance recap below for you. On tonight’s 90 Day Fiance season 3 episode 5 “The Rest is Still Unwritten”, as per the TLC synopsis, “Darcey confronts Tom. Ben impresses Akinyi’s brother. Rebecca gets concerned about Zied’s temper.”

Rebecca and Zeid had a date night. They wanted to go out to a club and have fun, but they got into an argument. It was apparently about Rebecca’s clothing. She was wearing a revealing top (according to Zeid) and he asked her to change. He said that the outfit would cause problems and that’s why he wanted her to change and, well, she didn’t get that. She thought her outfit was just fine. She also didn’t want to change her clothes because of a man. Her ex used to tell her what to wear and it got pretty old fast.

Her ex was also very controlling overall. He would get jealous and he’d try telling Rebecca what she could or couldn’t do. But that wasn’t why the relationship ended. The relationship ended because he was a cheater and so his insecurity didn’t really play a factor in the demise of their marriage. Rebecca also didn’t have to worry about the same thing happening again because that’s when it turns into wish-fulfillment. She ended up going outside in the top because she wanted to prove to herself that she could wear whatever she wants and funnily enough there was a problem when they were at a club.

Zeid had asked Rebecca not to take off her jacket. He thought her outfit was more appropriate with the jacket and, to needle him, she took it off anyway. She had something to prove when she did it. She wanted to show up that he didn’t dictate to her and all she did was play herself. She took off her jacket and a man ogled her. The guy was blatantly staring at her chest. It was so obvious that Zeid grew frustrated and he got into an argument with this man. They were standing up, yelling at each other, and the mood didn’t shift even as Rebecca put her coat back on. She hoped it would put an end to the fight and it didn’t.

Rebecca was trying to rein in her man while Darcey, was over in London, wanting some of that heat. The relationship between Darcey and her latest hunk Tom has sort of been cool. Not the good cool, but like there wasn’t a spark their kind of cool. The two shared a bed because Darcey cried until he agreed and even then nothing happened between them. Tom was willing to impress her with everything but sex. He took her on a boat ride and he taught her cricket. Cricket being the British version of baseball. Anyways, Darcey enjoyed the game and she got to show off a cute outfit. She just wanted to know if Tom enjoyed her outfit as well.

Tom never assured her of where she was with him. He would complain about her emotional state and still sleep beside her. Then he would take her on a sweet date and the date would more be about him than her. Normally, this would be a few warning signs and yet this Darcey. She never sees the signs. She did the same with Jesse and she did it again with Tom. Tom who been talking to her for four years and only recently gave up several relationships with other women. Tom who confessed to her that their time together was a test. A test to see if they’re compatible and so two guesses on who’s failing that test!

Another failure to launch was Omar and Avery. They met on a Muslim dating site and she forgave him for the whole lying issue. He pretended to be American until he later revealed he was in fact Syrian. His country was going through a civil war and maybe that’s why he chose to lie. It just didn’t change that their relationship began on a lie. Avery fell for Omar believing he was American and she was so attached that it hadn’t mattered when the truth came out. She still wanted to marry him anyway. And there was nothing anyone could say, not even her mom, that would get her to change her mind.

Avery wanted to get married so she’s getting married. Avery flew with her mom to Lebanon and that’s where the ceremony was going to be held. They were supposed to be married there and only then would she file for him to come to the states. But Omar completely let her down. Omar said he would find a venue for the ceremony and he didn’t. He said he would find someone to marry them and he didn’t. He also didn’t seem to be concerned that he has nothing ready. He did, however, take exception when Avery got mad at him because he accused her of yelling and had this look on his face that demanded she calm down.

Avery couldn’t get anywhere with him and so she went to her mom, and her mom was more understanding. She knew that Avery still wanted to get married and she wanted to make that happen for her daughter. They were going to go try the nearby mosques and see if anyone there knows how to help. So, Avery’s mother put her daughter first and it turns out Jeniffer did the same. Jeniffer was the Latin beauty dating Tim. Tim was the American and he also has an unhealthy relationship with his ex, Veronica.

Tim and Veronica share a daughter. They both still care for each other and that along with the daughter was why they were such good friends. They sometimes refer to each other as their best friends. It was bordering on creepy and Jeniffer thought the same. She wanted to know why Tim was so overly involved with Veronica that it was Veronica giving him a ride to the airport. Jeniffer also questioned why Tim agreed to this behavior. He wouldn’t like it if Jeniffer was that close to her ex and so she vented at him. She even went as far as to question his metrosexual ways.

Tim was super clean. He gets manicures and pedicures. He also takes great care of himself and that was a new one for Jeniffer. She usually liked her men a little rough around the edges, but she was willing to look past that with Tim. Tim was a family man and that was her first priority. Jeniffer is a mother to one and she liked that Tim has his own child. It meant he knew where she was coming from and that he would be good with her daughter. Jeniffer also thought that alone would be enough and she was wrong. Tim later gave her a facial and that wasn’t her first thought of what it would be like with just the two of them in bed.

Although, a let down was still better than a lack of trust. Angela and Michael were returning couple this season and they’re going through the same exact same thing as before – Angela doesn’t trust him. She’s now testing that trust every day. She calls him out of the blue and it’s like he better answer else she’s going to get mad. She’s also made it hard for him to work just so that he could be on call with her and so yeah she was being pretty unreasonable. It wasn’t cheap to talk every day. He has to purchase more data and that could run up to four hundred dollars if they weren’t careful.

Angela has also managed to weaponize her mistrust. She tells him if she doesn’t trust him then she wasn’t going to file for him to come to the States and so that really has him out here playing by her rules. He can’t decide anything for himself. He couldn’t even celebrate his birthday without her because she got upset hearing how he went to a bar. She didn’t see how controlling she was and, while she was acting like this, she kept harping on his behavior. Like what did he do that day or why he wasn’t answering her phone calls on the first ring. It was a bit chaotic and Angela’s family wasn’t helping because they trusted him less than she did.

They weren’t like Benjamin and Akinyi. They were meeting for the first time and Benjamin came to Kenya with the purpose of proposing to her. He wants to marry his sweetheart and first he has to win over her family. He was staying with her brother and that was going to be a hurdle. The brother started as mistrustful, but he and everyone else was shocked when Benjamin didn’t bring a gift for Akinyi. That would have been polite and so it was incredible rude that Benjamin forgot. And he didn’t forget, he just wanted to save his money for the bride price because he knew that was the only way he could marry her.

And the last couple may not be a couple, Caesar was waiting for his “girlfriend” in Mexico and he didn’t find it at all suspicious when she signs off the moment she sees he’s signed on.