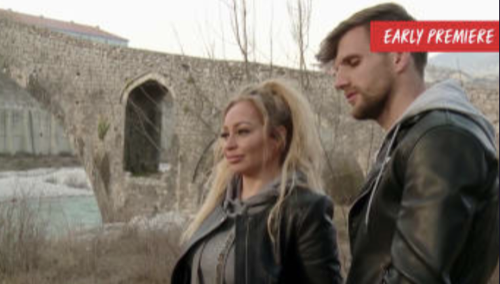 Tonight on TLC their popular reality show 90 Day Fiance: Before the 90 Days airs with an all-new Sunday, September 15, 2019 episode and we have your 90 Day Fiance recap below for you. On tonight’s 90 Day Fiance season 3 episode 7 “Caesar suffers a devastating blow. Zied’s sister gives Rebecca a hard time. Avery faces pressure the night before the wedding. Tom is taken aback by Darcey’s twin dynamic. Tim tries to fix things with Jeniffer and Ben is blamed for upsetting Akinyi.”

Zied’s parents were nice. Sure, they were disappointed to learn Rebecca had tattoos. They apparently didn’t think it was womanly and it was a little awkward when they also threw in that suggestion to have the tattoos “erased” only it didn’t come from a bad place. The parents were pretty much respectful for the most part. They could see how much Zied wanted the meeting to go well and so they never said a bad thing about the relationship.

They even gave Zied their approval to date Rebecca. They wanted their son to be happy and they were really to let it be if that’s what he really wanted. The parents, for the most part, were a lot easier to win over than the sister. Zied’s sister didn’t approve of Rebecca and she felt that way long before actually meeting the other woman. She also told Zied how she didn’t like this relationship and he kept that detail to himself.

Zied should have warned Rebecca about it but he didn’t. He didn’t want to make his girlfriend nervous and he hoped that meeting Rebecca would be enough to soothe his sister’s fears. In the meantime, Zied took Rebecca shopping. They went to the spice market and Rebecca got to see new things. She saw an animal’s heart, cute little pickles, and she enjoyed spending some quality time with Zied.

Overall, the infamous parent meeting went a lot better for Rebecca than it did for Benjamin. Benjamin went to Akinyi’s house and he waited around for her father to show up, but the man never did. He instead called his son to pass on the message that he wasn’t coming. Akinyi’s brother then said something to Akinyi and it made her upset. She left the house and Benjamin followed her. He tried to figure out what the brother said and Akinyi wouldn’t tell him.

She just kept asking that he leave her alone. So, Benjamin returned to the brother and somehow the brother was blaming him for Akinyi being upset. He said something like “I don’t know what you did, but this is the second time you made a mistake”. Which, you know, sounds crazy. Benjamin also felt the brother might have badmouthed him to the father and so he’s there blaming everything on the brother like the brother is doing with him. And Akinyi is just not talking to anyone.

Then there was Caesar. Caesar failed to book the flight properly because his credit card was declined and that meant it really wasn’t Maria’s fault this time. Usually, she was at fault with these failed meetups. She would take the money and then never book the flight. So Caesar tried to get around her by sending her the ticket rather than the cash. Then that failed too and now Caesar was alone in Cancun.

Caesar told Maria that he’d fix this. He said that he would find a way to get her to Mexico, but Maria never wanted to go in the first place. It’s why she waited to tell him the ticket was canceled. Maria liked taking Caesar’s money and she didn’t care about the person behind it. All she wanted was the money. It was Caesar that kept asking when they were going to meet and having the camera crews there must have sent her into a panic.

The tv cameras, as well as the production crews, were probably the last straw with her. Maria has been catfishing Caesar one way or another and she didn’t want to be caught in a con if she could help it. That’s why tonight she broke up with Caesar. Caesar was all crying and everything because he believes himself in love with her and that wasn’t loved. Its was a lie. His friends and family have tried warning him in the past and only now were Caesar’s eyes opened.

Tim and Jeniffer were another rocky relationships. They continue to fight about his exes because for some reason Tim tends to remain friends with his exes. He called his ex-fiancée his best and his other ex had texted him while he was on vacation to see Jeniffer. Tim then showed Jeniffer the message and that inflamed her. She didn’t know his last girlfriend was also a Colombian. It made her feel like a replacement when she heard it and so that’s one of the reasons she got so upset.

Jeniffer has had some bad experiences in the past. She didn’t want to take this faith again only to be hurt again. Its why she was so defensive. Jeniffer didn’t want to be in anyone’s shadow and it wasn’t until Tim assured her that it was just her that she came around. She even brought her daughter with her and the little girl was quickly falling in love with Tim. Tim has already shown he could be a great stepdad and that was Jeniffer’s chief concern. And so that’s where they both put their focus.

The three spent time as a family. They went sightseeing and they talked about having more kids one day. Jeniffer thought it was slightly odd that Tim would mention that when he hadn’t even kissed her. Tim was taking his time with things. He hasn’t slept with Jeniffer and he doesn’t want to kiss her either. He said he was waiting for the right moment. It just felt like this “right moment” was never going to come around at this point.

But Angela might have just ended her relationship with Michael. Michael has been taking several photos of himself surrounded by other women and he uses those photos to pretend he’s a big man on social media. Angela did talk to him about those photos as well. She wanted them to stop and Michael said that he would even if he never did give them up. Michael continues to sneak women into his photos.

He doesn’t think Angela notices, but she does and she used this latest trip to finally get an honor answer out of him. Michael took her to a boat and Angela asked him if he ever been the boat with another woman. Michael denied and yet there were photos. Angela asked him more than once and she didn’t flip out until he kept trying to lie. Michael refused to take ownership of what he did. He first said he never lied and then he said he didn’t mean to lie.

Michael also claimed the woman was there with someone else. Only if that were the case, why would court Angela’s wrath and still try to sneak in a photo of the girl. Angela knows that Michael will try to get away with anything and everything so she walked away this time. She went back to the hotel and told Michael she never wanted to see him again. She showed she meant it too when she threw all of his stuff out in the hallway.

Angela also ignored Michael. Michael stationed himself down in the lobby and he said he was going to wait for her there. He didn’t last long, but he was there when she was trying to leave the hotel. He kept trying to plead his case. He asked if he could get the car for her and she said yes because she wanted to get rid of him. Angela used the moment he left to go do her hair. She was at the salon when Michael again tried to make this up to her and this time he brought a cake.

It was the same old move of his. The last time Michael upset her, he brought a cake and it had fixed everything with Angela. This time it didn’t. Angela smashed the cake in Michael’s face and she again told him she was done with the relationship. Michael claimed he didn’t deserve the cake in the face. He said he didn’t do anything that warrants it and so now he was upset because he said what he did wasn’t that bad.

Next came Darcey and Tom. The two of them gave up their vacation on the beach to fly to Albania. Its where Darcey’s twin sister was staying with her fiancée. Darcey said she wanted to see her sister because she wanted the sister to meet Tom and the truth is she’s trying to compete with Stacey. Stacey was the one in the solid relationship. She’s been in a relationship for several years and she’s engaged to be married.

Darcey meanwhile wanted all of that and didn’t know how to get it. She fell for men that she had nothing in common with and who clearly didn’t get her. They would try to be understanding, but ultimately they’ll fail to understand her very emotional state and so this trip was really a bad idea. It showed Tom that Darcey has this need for competition and it showed Stacey that Darcey was once again moving too quick with the wrong guy.

Then, just like how everyone assumed it was going to happen, the meeting with Zied’s sister did not go well. Wiem did not want to lose her brother and so she hated Rebecca. Rebecca tried to befriend and each time she was rebuffed. Wiem just wanted her gone. She wanted to keep Zied in Tunisia and Zied wanted to leave with Rebecca. So, Rebecca felt like she needed to be completely open with Zied if he was willing to leave his family behind for her.

Rebecca later confessed to a lesbian relationship. It was in her past and she doesn’t want to be with a woman now, except she brought it up and it’s out there. She could have easily hid the relationship. She didn’t have to be that honest with him and telling him now seems like she was inviting problems.