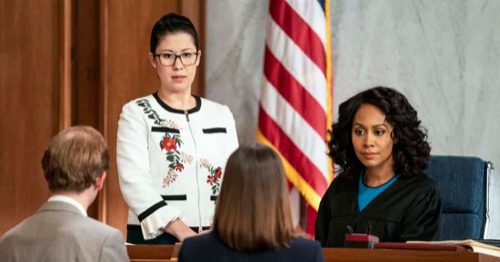 Tonight on CBS their new series All Rise airs with an all-new Monday, December 16, 2019, season 1 episode 11 called, “The Joy From Oz,”and we have your All Rise recap below. On tonight’s All Rise Fall Finale episode as per the CBS synopsis, “Lola must defend herself before the Commission on Judicial Performance after a bias complaint is made against her; Judge Lisa Benner enlists Sara, Emily, and Luke in staging a Wizard of Oz-themed mock trial.”

Lola has been kicking herself. She should have been enjoying the fact court was adjourned for 2019 and how she didn’t have to return for several weeks, but she’s been beating herself up over this Travis situation. Travis had been a defendant in her court. He came before her bench asking for a second chance and she granted him one. She gave him a chance because she thought he would turn his life around for his daughter. He instead broke the law the very next day and he was killed in a fatal police chase. Travis was now dead and there was no one else to blame for it but herself. Lola blames herself for the tragic accident. She wondered if maybe she should have put him in prison when she had the chance because then he still is alive.

Lola even considers whether it was something she said that made him nervous. Her last words to him were that she didn’t want to see him back in her court again and so maybe that’s why he went on the run. He could have been scared of getting arrested again. Either way, Travis was now dead and all Lola could think about was his baby daughter. She felt guilty whenever she thought about that baby and it didn’t help that there was this Commission for Judicial Performance to also contend with. The CJP was put together by her former coworkers who all thought she was being an awful judge. They seriously thought they had a case and so Lola was going to have to fight back.

For that, she had Sherri. Sherri did reconnaissance on everyone that would be making a decision in Lola’s case and she thought she got them right where they needed those people to be. They later got someone thrown off the commission because she had sent Lola several emails using salty language. Lola and Sherri thought they were winning after that and unfortunately, they got someone worst in the woman’s place. They got a man that hated Lola. Lola and Sherri were dealing with this newest obstacle and they were going it alone with just the two of them. They couldn’t rely on Mark because Mark received the case of a lifetime.

Mark was on hand however for pep talks. He talked Lola up before he had his turn in court and he wasn’t the only one coming to her defense. Emily also told the Deputy District Attorney that what’s happening to Lola is unfair. Lola was one of the best judges there is because she listened to both sides and so Emily was telling everyone how unfair this commission was. Emily and the staff had been roped into putting on a mock trial starring Dorothy and the Evil Witch. It was all going fine until Emily brought her very strong feelings on Lola into the mock trial and came across as a big meanie to the kids.

Sara was able to turn it around. She rubbed her slippers together and had the children laughing before long, but Emily lost a lot of points with Judge Benner for what she did and so there’s a time and place for everything. A mock trial wasn’t it. Lola was going through something serious and just when she thought she might win they decided to throw the Travis situation in her face. They even brought in his girlfriend/mother of his child. They said Travis would be okay if it wasn’t for her and that was a new low for them because it had absolutely no bearing on Lola as a judge. She was a great judge.

The ADAs didn’t like her because she made sure everyone received a fair trial. They thought she would be on their side because she was one of them and so they were thrown when she didn’t let her former relationships get in the way of doing the job. Lola could have been defeated after they mentioned Travis, but she fought on and she said just because she does things differently doesn’t mean she does them wrongly. Lola made a strong case in her own defense. She eventually got them to see that she did her job properly and so she wasn’t being thrown off the bench any time soon. And so she found the time to make an appearance in the Oz mock trial.

Mark also did some good. He won his case and he decided to work his father’s case with Amy Quinn. He first hired her because he thought he didn’t want to touch his father’s case, but he realized he wanted to support his dad because he knew Vic could never have killed someone. So he was back in. Mark was working his father’s case and Lola was still a judge. She even made peace with the guy that supposedly hated her and it turns out he doesn’t hate her. He just does his job differently. He also had a word of warning for Lola. He told her to be wary of Judge Benner because she has a past that might get in the way.

Later, mostly everyone went to Emily and Sara’s holiday party. Sara loves parties because she comes from a big family that was all scattered and she missed the noise. Emily was just happy to get away from all the stress and she did make peace with the DDA. She also kissed Luke in a room full of people. Thereby confirming that they are now a couple which was good for them even if it did remind everyone else that they’re single. Lola’s husband was away and Mark’s girlfriend broke up with him because she wanted to take a job out of town.

And so Mark and Lola were there for each other as 2019 came to a close.