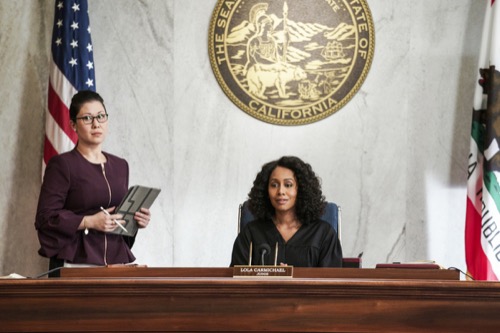 Tonight on CBS their new series All Rise airs with an all-new Monday, November 4, 2019, season 1 episode 7 called, “Uncommon women and mothers,” and we have your All Rise recap below. On tonight’s All Rise episode as per the CBS synopsis, “Mark and Emily go head to head in court for the first time, and things get awkward when Mark must cross-examine Lola’s mother when she’s called as a character witness.”

Tonight on All Rise, Judge Carmichael’s mother Roxy visits the courtroom as a witness in an arson case Lopez is representing, the accused person named Jax maintains innocence.

During preparing for the case an earthquake hits and with no emergency plan in action Kanksy and Castillo compete to be the floor warden. Callan has issues with Judge Carmichael’s mother Roxy being a witness on the case he is prosecuting against Jax.

He feels it’s a conflict of interest. Judge Carmichael is placed on warrant duty where she has to sign off warrants but refuses to sign off one where a woman says her neighbors possess guns without any proof so Carmichael wants to interview the person accusing the neighbors, the judge dismisses her claims and doesn’t sign off, the detective goes behind her back and gets Judge Brenner to sign off and a large gun collections found inside the suspected neighbors home.

As the arson case develops Callan begins questioning the construction site head who identifies Jax as the arsonist, in Jaxs defense Lopez brings up the company past in committing insurance fraud since none of the cameras were on the night of the fire.

Callan begins to question Roxy he asks her a question in where she refuses to answer it and the judge on the case holds her in contempt.

Judge Carmichael goes to visit Roxy while she is being held in a cell and even tho she is upset she’s more upset about Judge Brenner signing off on the warrant behind her back, she tells her mother to do the right thing and tell the truth in the stand.

Roxy takes the stand again, the question asked was about socks involved in the crime where Roxy admits she brought for Jax. This damages Jax’s defense and Lopez begins to worry they may lose and tries to get a lesser sentence, her closing statements depict Jax as a homeless person trying to prevent the construction company from building on a place she called home.

The jury finds Jax guilty of a misdemeanor with fines and no jail time, instead of a felony which is what Lopez and Jax hoped to get they both seem pleased with the outcome.

Carmichael confronts Brenner about the warrant and as things get heated Brenner tells her to take a deep breath and calm down and she exits out the room.

Carmichael returns to Brenner and tells her she was right to sign off on the warrant, both women agree they are on the same side and put it behind them and Brenner appoints Carmichael as the new floor warden.

Roxy visits Callan about having her thrown in jail she doesn’t take it personally and he apologizes for it, Roxy gives Callan advice to reach out to his estranged father.

Callan takes Roxy’s advice and goes to have a drink with his father at a bar, Callan seems worried about his father’s health he reassures him he’s fine. Lopez and Watkins have a heart to heart about what’s been going on between them and about her failed marriage she recently got out of, she asks him to be patient with her and take things to slow between them and he agrees.