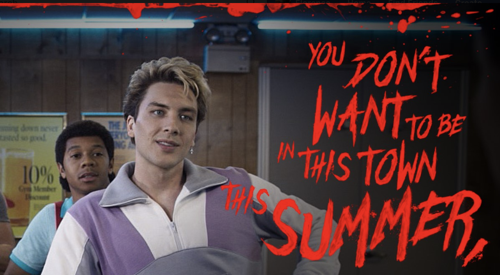 Things in 2019 were bleak! Some guy was trying to make his way to Camp Redwood because the camp held answers for him. He also thought finding the camp would be easier than it was and unfortunately for him, he had to hike his way there. Camp Redwood has been closed for years. There was nothing but overgrown trees and grass there now. Not that the hiker let that stop him. He had some motivation or another to see the bloodshed that ended the camp back in 1989. He thought seeing the camp for himself would tell him what happened to his father.

This hiker’s name was Bobby Richter. He was Mr. Jingles’s son and he traveled all that way to find out what happened to his father. Bobby was raised by his aunt you see. She never told him about his father or what happened to his mother. She didn’t mention a word until she was on her death bed and felt she had to say something or she would forever lose her chance. The aunt told him his mother was murdered back in ’89. She also said that his father needed to avenge the murder and that the last place he talked about was Camp Redwood.

Bobby has also been receiving checks. He thought they came from his dad and he didn’t have any reason to thought this theory. Bobby went to the camp believing his father was still alive, but then he ran into Montana. It was a great thing too because Montana was honest about what she was. She told him she was dead and she was later joined by Trevor who also said he was dead. Together the two of them told Bobby what really happened all those years ago. They told him that Trevor diverted everyone from coming to the camp for that concert and that Margaret had killed him for it.

Margaret shot him in the penis mere feet away from the camp because she wanted to stop him from coming back. She also left him to die alone and that was her mistake. Montana was there to coach him to crawl his way forward. There was also Brooke. Brooke helped Trevor make it to the camp to die and she didn’t want anything in return. Brooke did it because she said she was nothing like Montana or Brooke. She didn’t want to cause people pain. She merely wanted justice and that’s why she came back as she did.

Brooke could have escaped. The whole world thought she was dead and she wasn’t. She wasn’t a ghost or anything. She was living and breathing and she could have run. Except she came back for Margaret because Margaret needed to be stopped. It was the one thing the dead and the living could agree on. They all wanted to stop Margaret from carrying out her bloodbath. Its why Trevor stopped the concert and why Brooke came back. They all knew Margaret was using the camp to play into her sociopathic tendencies.

Montana and Trevor told Bobby everything. They also told him how they haven’t seen Mr. Jingles in a while. He disappeared thirty years ago and they were pretty sure the devil hadn’t brought him back again. The Night Stalker seems to be the only one with that card up his sleeve. Montana and Trevor even told Bobby about the Night Stalker. The Night Stalker wanted to kill Bobby and so the campers have been stopping him. They keep a death watch. They kill him and, the moment the devil revives him, they kill again.

The camps have been protecting Bobby for thirty years. They were still trying to do so when they told him to run and he wouldn’t listen. He wanted to stay at the camp until he heard about his dad. He was arguing with Montana and Trevor about it when the Night Stalker escaped his deathwatch. The serial killer was coming for Bobby and the campers were doing their best to stop him. They barely managed to subdue their guy when Montana called out that he needed to speak with the director at the psychiatric hospital.

Bobby did just that. He ran away from the camp and went to go see the Director who was later revealed to be Rita/Donna. Donna told Bobby the rest of the story. She and Brooke came to an agreement with the ghosts. They cornered Margaret and they killed her slowly. As long as it took them to send her body parts over the boundary line. Margaret did get a few good shots in with her gun and so Brooke was hit. Donna, believing Brooke was dead, has moved on with her life. She doesn’t visit the ghosts anymore because she knows it hurts them and she wasn’t the one sending Bobby the checks.

Bobby was still looking for his secret benefactor. He and Donna followed the trail and it led them to Brooke. Brooke survived the bloodshed thanks to Ray. He carried her to the boundary and called the emergency services from the camp’s office. Brooke was then taken to a hospital and she treated, but she didn’t tell Donna. Donna was a part of her past and Brooke didn’t want to be reminded of it. Brooke instead moved on. She married a doctor and has two kids. She felt bad about not contacting Donna and so they at least bonded over their shared past. And together they tried to tell Bobby to move on.

They didn’t want Bobby going back to the camp. It was the pull of that place that led to so many deaths and yet Bobby couldn’t let it go. He had to see his father. He went back to the camp and he ran into Margaret. She died a mere second within the boundary and that meant she couldn’t leave either. Margaret tried to kill Bobby as well and his father stopped. Mr. Jingles protected his son. He told Bobby to run and they got a chance to hug. But then Margaret popped back up again. She wanted to kill Bobby and so his grandmother protected him that second time.

Bobby’s family wanted him to survive. They couldn’t afford to lose him as well and so they came together to protect him. They even got Bobby back over the border. He was safe now and he could get married and have children and he could keep them all alive by telling ghost stories.

Donna and Brooke were the final girls, but Bobby was their key to the future.