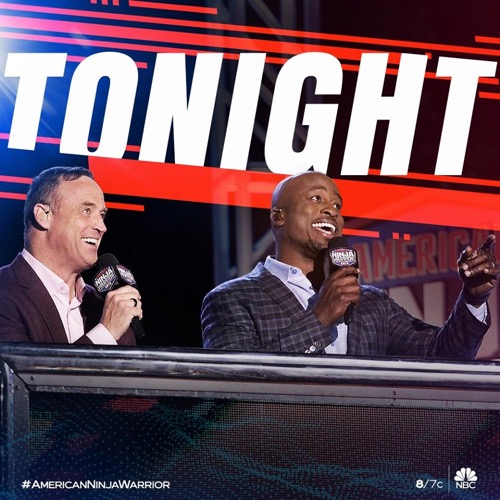 The Ninja Revolution hit Baltimore. The Baltimore City Qualifiers brought forth some of the biggest names in American Ninja Warrior and in one case one of the oldest ninjas around, but the first one up was a rookie who made a unique introduction. Daniel Eiskant goes to school in Baltimore and is part of an acapella group. His friends from the group came tonight to sing his introduction to the game and it had been memorable. The rookie’s run, on the other hand, had been short. He fell on the Hazard Cones and it looked like his body had bent in half. Daniel was lucky to be okay and now he knows that ANW isn’t for everyone.

The next rookie had been Alex Goodwin. He has an affinity for animals and he even brought a boa constrictor with him for luck. His snake friend was up in the commentator’s booth enjoying himself with Akbar and meanwhile, Alex made it past the Hazard Cones. The latest balance obstacle could be defeated, but he lost his grip on Crank It Up and that’s about as far as everyone went for the next couple of ninjas. Then came Angela Gargano. She was a promising rookie last season when she tore her ACL on the course and had to be carried out. Angela worked her way into staying in shape and tonight she took off her knee brace.

Angela looked strong with the first few obstacles. She was a gymnast and it showed in her upper body strength. Angela also showed no discomfort with her first high dismount and so it didn’t look like there were any problems with her knee. She actually looked like she was in the best shape of her life, but then came the Hazard Cones. It was too much on her reconstructed knee and Angela slipped off. She still made it far in the competition and so she’ll have to wait and see if she went far enough fast enough to make it into in the City Finals. And she probably had a lot to consider as the show went to commercial break.

But when it returned, there was another new ninja to highlight. Brandon Stenta came tonight with his son Brody. Brody was born a week before Brandon’s high school graduation and, so while a lot of his friends were out partying, Brandon was at home with Brody. They were each biggest cheerleaders and it was sweet to see their t-shirts say “I have a reason” and “Daddy’s reason”. Brody has inspired Brandon every step of the way and so, of course, the rookie had the best run. Brandon sailed through the course and he was the first to make it past Crank It Up. And he was the first ninja of the night to hit a buzzer.

There were a few that tried to accomplish the same thing over the commercial break, but none made it past Crank It Up and the next best hope was Nick Green. He was a firefighter and he was also one of the biggest competitors. Nick had to work on his fitness as well because it was life or death for him and so everyone thought he would make it far. Only as it turns out he didn’t make it to the fifth obstacle. These obstacles were no joke and anyone who thought that would suddenly find themselves in the water. The only way to defeat an obstacle is to tackle it like a ninja and Abby Clark was hoping to relive some of last season’s glory.

Abby Clark was one of the few women to become a finisher last season and she wanted a repeat. She made it farther than most of the women this year, but she fell on the Hazard Cones and like Angela she had to wait and see if she’ll make it to the City Qualifiers. Connor Galvin went next. He’s a graduate student and he credits his grandfather for his strength. His grandfather Ducky served during WWII and he was his grandson’s hero. The older man had to go through some obstacles back in the day and so Connor says that’s where he gets it from. Another tidbit is that Connor has been doing really well through the regional competitions and so the veterans knew he would do well tonight. And they weren’t wrong.

Like, expected, Connor had an easy time of it on the course. He sailed through the beginning and he was one of the few people to make it pass Crank It Up. With that accomplishment under his belt, the rest had been easy and he went on to become the second finisher of the night. The next ninja was someone that everyone believed would be the third finisher. Joe Moravsky has always hit a buzzer each and every year. He had a perfect streak and this year he made it known that he was going after the Mega Warped Wall. He wanted to prove something to himself after last year and maybe that’s where he went wrong.

Joe had no problems with the rest of the course. He easily went through the course and he was doing so at the fastest time, but then he came to the Warped Walls and he went after the Mega. It wasn’t about ten thousand dollars. It was just about being able to do it and unfortunately, he couldn’t. Joe never got the height he needed to get a firm grip on the Mega and he tried all three times. He also failed all three times and so this was the first year he’ll be moving on with a buzzer on his resume. Joe risked his perfect streak and now there was no way to reclaim it. And so moving on, up next were the Brick City Ninjas.

The Brick City Ninjas stood for Desi and Brandon Singletary. The father and son duo were from Newark otherwise known as Brick City and hence the name. Desi would be having his ran later, but up first was Brandon. Brandon has trained with his dad and he was considered quite good. Unfortunately, it was just not good enough. Brandon fell on the Dangerous Curves and it will be up to his dad to make a more successful run. Afterward, there was another familiar name. Tamika Catchings was a basketball player who was also one of the tallest female ninjas and it helped her because she literally could just reach over to grab something she needed.

Sadly, being tall didn’t help her on the Dangerous Curves and she was another one to fall victim to it. The next ninja to have their run was Garrett Lam. He was running this year out of love for his twin brother Austin. Austin was unfortunately born with a condition that made it hard for him to understand what was going on yet he always knew to smile at Garrett when Garrett needed it the most. So he ran tonight in honor of his brother. Garrett preserved through the course and held on during Crank It Up. He managed to hold on long enough to get him to the Warped Wall and he didn’t waste his time with going after the Mega. He went after the Minor and became a finisher when they were so few on the ground.

Then there was Alyssa Beird. She was a strong veteran and she had taken some time away to clear her head, but tonight was supposed to be her big comeback and it fell short. She started strong like so many others and then she fell on Crank It Up. It was an obstacle designed to tire out the ninjas by turning their arms into noodles. Plenty of hopefuls fell on that obstacle this year and that’s why there wasn’t a long line of finishers this year. But the next ninja up was Dave Cavanagh. He was a traditional walk-on and surprisingly he was also a veteran. He’s been around for six seasons and has to had to be a walk-on for each year until this year when he finally called upon to enter the competition.

Dave has finally been given the recognition he deserved and so he made tonight memorable. He raced through the course with one of the fastest time to date and he was able to quickly move in position for the Power Tower. It was like the Warped Wall was a means to end and perhaps it was because now Dave was in the running for a Fast Pass. The only one he truly needed to worry about was the next and last ninja of the night. Najee Richardson was also a veteran and he has a track record of taking home that additional ten thousand dollars from the Mega Warped Wall. So he really was the one to beat. He was quick on his feet and he was called the Flying Phoenix because it was like he flew right over the course.

Only this year Najee didn’t become a finisher. He tried the Mega again and he couldn’t make it up there despite all three tries. This was a first for Najee, but this year the Mega Warped Wall was unforgiving.

With Najee out, the last race for the Power Tower was between Connor Galvin and Dave Cavanagh. Both parties have proven they were fast through the fastest ninja of the night went to Dave who also received a Fast Pass to the Nationals.