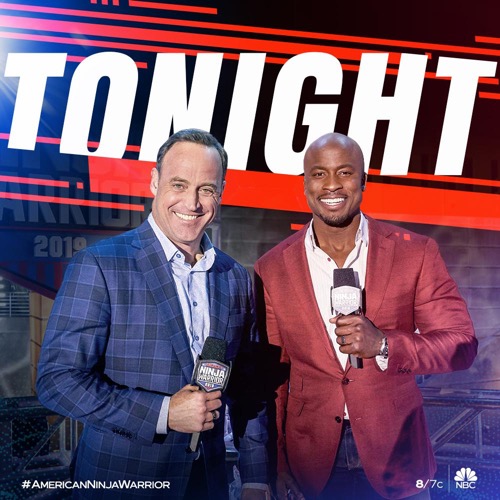 American Ninja Warrior begins with Baltimore City celebrating their City Finals with a brand new obstacle that was inspired by the new movie “The Angry Birds 2”, as Baltimore is famous for The Raves and The Orioles. The competitors will have to race across, holding onto tiny spaces on each piece. At the end of the night, the Top 2 competitors will face off on the Power Tower, facing head to head for a safety pass; which gives them a do-over at the National Finals, where if they fall they will be given a second chance to run the course again.

We begin tonight with Anthony Eardley, 28. He is a welder from Oneonta, NY. Anthony shares his story about coming into his adopted family when he was two years old; they adopted 6 children and he hopes they can all inspire and be passionate towards others. He tears up, promising he will do his very best every day. He is an underwater welder and scuba instructor but played football, basketball, and track.

Anthony was an early track star; having great power as he easily swings into “dangerous curves”. Fans are reminded that only 12 instead of 15 will move onto the Finals. He is confident as he faces the “Hazard Cones”, a balance challenge. He skips the third cone as he prepares himself for the challenge that took him out in qualifiers, the “high fox”. He shows some love to his family. He makes it over, finally getting his first chance at the curved wall. His confidence grows as he faces the Salmon ladder, savoring every moment. He is the first one to face the Angry Bird obstacle, falling after he made it to the 8th obstacle.

Logan Kreglow a mechanical engineer reaches new heights but his run ends on the Salmon ladder. Ryan Lee, Philadelphia calls himself the “nap time Ninja”; loving to take naps on the course but he falls on the new obstacle as well. Eli Bell from Brooklyn, NY is a gymnastic coach, but he took a dive on “Crank it Up.

Bell’s girlfriend, Karter Olson, known as “Karter the Krusher” She is 19 years old and a rookie. She comes from Winchester, Virginia; saying her father is her biggest inspiration who had a heart attack when he was 38. Her family works together to instill a better, healthier lifestyle, they all got closer because of it. He is her hero and wants to do amazing things simply to make him proud. She fell with the dangerous curves obstacle in qualifiers but clears it this time. She falls at the crank it up the obstacle, very worn out.

Kevin Liang, 32 a financial trader from New York. His rookie season was 2018 where he is famously known for his spectacular fall from the “spinning bowties” obstacle. After he failed in Season 10, Mr. Taiwan, his idol, encouraged him to keep pushing forward and not make any excuses. He is back for redemption, promising not to let Mr. Taiwan down. He fell at the crank it up an obstacle in qualifiers and falls again after he swung too much.

We return with 19-year-old rookie Tristan Poffenberger from Middletown, MD; with is screaming family on the sidelines, falls at dangerous curves. Daniel Eiskant from Baltimore was next, a student at the University of Maryland. He crashes at crank it up. Anthony DeFranco from Parsippany, NJ came out on fire, having one of the fastest times yet, but it all came to a halt on the Angry Birds obstacle.

“Sharkboy” Clayton Mirage is a Marine Biology student, obsessed with sharks. He attacks the course with speed. He falls at the same spot, in Angry Birds; no one clear this obstacle yet. It was a strong run, but was it enough?

While on break, 3 more athletes ran the course. Cara Poalillo, Podcaster who made her second appearance, but just like qualifiers, falls at the dangerous curves. Alex Goodwin, the Animal Rescue worker, “raising the flag” on the wall; only to fall at the beginning of the Angry Birds. Ryan Rattazzi from West Sayville, NY is 6ft 5in, the tallest competitor. He cleared the wall for the first time but also falls in Angry Birds.

Mike “The Stallion” Silenzi, 32 a gym owner from Chicago, IL is up next. He needs to keep moving and ending the course quickly could be what it takes to make it to Las Vegas. He reaches the Angry Birds course but is definitely feeling it; looking very fatigued. He falls at the same spot as the stallion couldn’t hold on, but making it to the 8th obstacle so quickly could get him to the Nationals.

Angela Gargano, 28. A gym owner and fitness model, Cranston, RI. She had destroyed her ACL on the course one year ago, making her triumphant return in qualifiers. She feels this year is all about redemption after 11 months of rehab, feeling she is back and stronger, ready to crush this. She takes on the hazard cones, where she fell during qualifiers, barely making it through. Gargano falls at the 5th obstacle “Crank it Up.” We will see if this gets her to the finals.

Abby Clark, NJ Special Ed Teacher runs the course, smoking past the cones, which took her out at qualifiers but ends up falling at the end of Crank it up. She is on the bubble with the second position among women. Joe Capobianco, Gym Director, makes it up to the wall for the first time ever. He falls at Angry Birds but his fast time left him a good position to move onto finals. Julius Ferguson, a rap artist “Black Jewels” is not playing around. He does a flip at the wall before clearing it; he also falls at Angry Birds, but he has put up the fastest time tonight so far.

Joe Moravsky, the Connecticut Meteorologist has been the most consistent competitors in this sport, twice being the last Ninja standing; going further than anyone ins season 6 and 9. He has been remarkably consistent, now working on the Angry Birds after clearly the Salmon run in 3 strides instead of 6. He falls at the exact same piece everyone falls at when making it thus far.

Lucas Reale, 20 a Ninja coach from Kingston, MA. Dave Cavanagh trained him since he was 16. The day he walked into the gym was the day he lost his father to suicide. He went to the gym for healing and has never left; firmly believing it was the gym that helped him heal and the gym is definitely his second family. Dave Cavanagh is in the warm-up area as he is competing later in the day. He has to beat Ferguson’s time of 2.48.03 to qualify. With a huge smile, the crowd chants for Lucas, making it to Angry Birds. He tries to skip the blind grab and falls but since he beat the fastest time, he is guaranteed to go on to Vegas.

Conor Galvin, college student made it to the Power Tower in qualifying but couldn’t make it past Angry Birds. Garrett Lam, Rhodes Scholar also fails at Angry Birds. Chris Wilczewski from Mount Laurel, MI also falls; making him the 13th athlete to be knocked out already!

Allyssa Beird is one of the strongest athletes. She is 28 from Plainville, MA a 3-time national finalist and only 1 of the 2 women to complete stage 1 in the last 3 years in Las Vegas. She is trying to meet Abby Clark’s time; but she is acting with no urgency and is behind in time, putting the pressure on herself. She is passing crank it up, immediately earning her spot in Vegas. She smiles making it all the way to Angry Birds but also falls at the blind grab. We will see her in a couple of weeks at Nationals.

In qualifying, Brandon McWilliams became the first competitor, in qualifiers to hit the button who has cystic fibrosis. He makes it to the Angry Birds obstacle and is the 15th competitor to fall off it, but his time is fast enough for him to make it to Las Vegas for Nationals. Brandon Stenta, Essey Junction, VT who is out with urgency, but is unable to finish the Salmon ladder. Lucio Batista, personal chef attempts to beat the clock, reaching the top of the ladder qualifying him for the Nationals, only to fall seconds later on Angry Birds.

Captain NBC Jamie Rahn is up next. He is 30 years old and a Ninja Coach from Thornton, CO. He clears the wall with ease, ready to compete in the second half. He needs to hustle but his time takes him out of the top 12, so he needs to clear the obstacle. He falls at the same location, making this season officially over for him.

Najee “The Phoenix” Richardson is up next. He is 28 and a motivational speaker from Philadelphia, PA. Fans had to watch him have an asthma attack at the end of season 10, forcing him to quit the course. He meets with John Narkin the Philadelphia Battalion Chief, sharing that they are working together to raise funds for the Lung Association; hitting close to home with Narkin being diagnosed with stage 4 lung cancer. Together they are doing the “Fight for Air stair Climb, raising over $25,000. John is a reminder for him to never give up. He didn’t beat Reale’s time but is second. He needs to clear angry Birds to guarantee a spot. He also falls at Angry Birds, taking out the phoenix.

Dave Cavanagh, 33 years old and a firefighter from Weymouth, MA. He has the fastest qualifying time. Dave shows him and his wife sold their apartment and travel by van across the country; admitting they wouldn’t change it for the world. His wife, Jenny is there supporting him with several of his students from his gym in Boston. If he beats the time, Najee will be knocked out of the top two and his chance at the Power Tower. He annihilates the time, pausing at Angry Birds, but ensuring his chance at the Power Tower. He also falls at the blind grab, making him the 22nd competitor who tried and failed.

Lucas Reale and Dave Cavanagh, the two who work together in the same gym in MA. Cavanagh may have done the challenge before but this time it is all about upper strength. Lucas promises that even though Dave is his boss, that doesn’t mean he will take it easy on him. The two are neck and neck but Cavanagh just needed the dismount and hits the buzzer, making him the “King of Baltimore!” Dave Cavanagh now has a huge advantage at the final; after he has conquered the Power Tower twice. Dave reveals Lucas will always have a job.