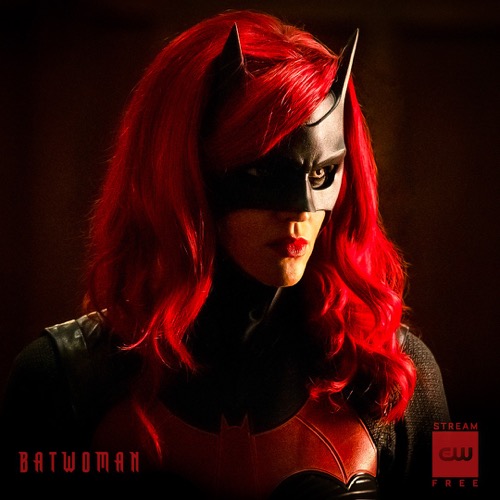 Tonight on the CW the series Batman airs with an all-new Sunday, November 10, 2019, season 1 episode 6 and we have your Batwoman recap below. On tonight’s episode called, “I’ll Be Judge, I’ll Be Jury” as per the CW synopsis, “A disturbing death has Gotham reeling and the city reaches out for their new vigilante hero. Luke (Camrus Johnson) confides in Kate (Ruby Rose), while Sophie (Meagan Tandy) asks Jacob (Dougray Scott) for a special assignment.

Alice (Rachel Skarsten) continues her nefarious plot against the Kanes, with Catherine (Elizabeth Anweis) being a conduit to part of her plan. Batwoman pays another visit to Mary (Nicole Kang.) ”

A man is on the phone and says the victim has come forward and confronted her attackers. Then he sees a large figure, with a black trench coat, a mask, an ax in his hands; he cuts down an electric pole and it comes smashing down on the man’s vehicle, then he smashes down on a fire hydrant. The man drops his briefcase and runs, he tries to climb a fence but is electrocuted.

Kate is with Jacob, she tells him that they need to find Miles and Alice. All of a sudden, Sophie comes in and tells Jacob there is a story on the news that he is going to want to see. Assistant District Attorney Agnus Stanton is murdered. There is a surveillance camera that showed the masked man – Jacob is wondering why the news found out before them; he wants this executioner cuffed and taken in. Sophie tells Jacob, that she would like to find out who is behind the batwoman mask instead of being on the Stanton case.

Alice and Mouse are in a room, she has a new mask for him – he tells him to put his head back while she places the mask over his skin. Mouse is a perfect match for Dean Deveraux. Mouse asked why they just kill Dean, who it there in the room, Alice says because Kate is watching her too closely. Alice tells Mouse that she needs him to steal Katherine’s new toy, the one that she is too stingy to share.

Luke is with Kate, he says that Stanton did a lot for the city and they need to find his killer. They look at possible suspects. All of a sudden, someone who claims to be the executioner has barricaded himself in a building; Jacob gets the news and sends his men out, tells them to make Gotham safe. The executioner will only speak to detective Connolly. Batwoman is on the scene, so is Sophie when they hear people screaming. Sophie is hit, but before she passes out, she calls Batwoman Kate.

Batwoman brings Sophie to Mary, asks her if she can fix her. Mary asks why she brought her there, she can afford a hospital.

Mouse, disguised as Dean Devereaux, he is congratulated for developing a weapon strong enough to penetrate the bat suit.

Kate tells Luke that Sophie called her Kate. Luke says great, and wonders why Kate dropped her off at Mary’s unlicensed clinic. Luke thinks the executioner is patterning how they kill convicts on death row and the next one will be with gas.

They have a visual on the man they think is the executioner, Chris the Fist, the Crows have him. Meanwhile, the executioner knocks out Kate, breaks into a building and steals his gas. Kate tells Luke the Crows to have the wrong guy.

Back in the bat cave, Kate has ice in her ribs from when the executioner plowed into her. On a surveillance video, Luke finds a pickup truck that they executioner was driving, it is registered to Bertrand Eldon, he was at Blackgate for 20 years, he worked there as their executioner.

Sophie has woken up, she asks Mary what the heck is going on. Mary tells her that Batwoman brought her in. Mary tells Sophie that she helps people who Gotham hospitals turn away. Sophie is handcuffed to the bed, Mary tells her Batwoman did it.

Batwoman sneaks into Bertrand Eldon’s home, nobody is there – but she sees Hydrogen Cionide is sitting on the coffee table. Batwoman asks him what is protocol, Luke take too much time to answer, she grabs the can, it is not empty, there is a USB drive inside.

Back at the batcave, Kate and Luke watch what was on the drive, Bertrand admits to what he did. He started digging into files and found that three people were corrupt and murder weapons were planted. The people he executed were innocent, so he was the guilty one and because of the corrupt people who put inmates on death row.

Jacob tries to give over Chris the Fist to the police, but Batwoman steals him from him and leaves the USB drive for Jacob.

Alice is playing checkers with Dean Devereaux, he is frustrated and tells her she can win. Alice wants to continue playing, when he goes to win, she freaks out. Kate calls Alice, she gets her private number. Kate asks her why she sent mouse into Hamilton Dynamics to get a weapon to kill Batwoman. Alice says that if she wanted to kill her she wouldn’t have to wait for her to wear the suit. All of a sudden, Mouse walks into the room, he has a cell phone to his ear and he was the once disguising his voice as Kate – he says to Alice, so, Kate is Batwoman. Alice is angry, she tells him that she doesn’t like traders. Mouse is upset that she kept information from him, he says that he protected her and took care of her, how can she keep secrets from him. Mouse shoots Dean and tells Alice, try keeping that a secret.

Jacob watches the USB, Kate walks in and says she heard that he had a visit from Batwoman. Jacob is upset, he says that he had the right guy and Batwoman should not have interfered. They argue, Alice comes up and she says the reason Beth is Alice is that he stopped looking for Beth.

Sophie is trying to free herself, she manages to do it, but Mary walks in and catches her. Mary gives her a hard time for betraying Batwoman and Kate but tells her to do what she wants. Mary gives her some pain medication and bandage, then tells Sophie not to tell her father about the clinic.

Batwoman sneaks into Judge Raymond Calveret’s house, he is the next victim and all of a sudden, the executioner is there; he can’t believe that Batwoman is going to help the judge who he considers a murdered. Batwoman and the executioner fight it out and the judge runs for his life. Jacob is there, he shoots the executioner and saves Batwoman. Jacob has his gun on Batwomen, he admits to getting it wrong when he thought it was the Fist. He asks her who she is accountable to, he has handcuffs and says guess they will find out. Something on the executioner is beeping, the executioner triggered the lockdown procedure and turned the room into a gas chamber; Jacob and Batwoman are locked inside. Batwoman gets Jacob to go to the floor so they can breathe what air is left in the room. Batwoman ignites an explosion in the room, it destroys the Hydrogen Cyanide.

Batwoman returns to see Mary and asks where Sophie is; she explains that she had no choice but to let her go when she escaped, and she knows who she is.

Kate writes in her journal, she knows she was wrong to blame her dad for finding and saving Beth. Jacob walks into the room and tells Kate that he doesn’t know how they are going to get Beth back, but he is not going to give up trying. Sophie sees them hugging and turns away.

Alice finds Mouse and asks him how he could think she would ever replace him. He says he doesn’t want to share her with Kate. Mouse has the weapon with him that will penetrate the bat suit, he gives it to Alice.