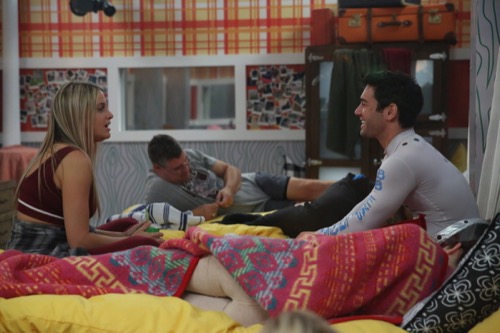 Tonight on CBS Big Brother 21 airs with an all-new Sunday, August 11, 2019, episode and we have your Big Brother 21 recap below! On tonight’s Big Brother season 21 episode 21 as per the CBS synopsis, “Tonight on BB21 we have the nominations and new HoH Tommy has to put two houseguests up on the block.”

Tommy is so happy to be the new HOH, it’s the best birthday ever! The six-shooter crumbled, but if Tommy has anything to say about it, they will reunite. Jessica had a great week, she got rid of the biggest threat in the house.

Christie is so happy that Tommy won HOH, it’s just like her winning. Meanwhile, Cliff and Nicole look depressed. Cliff doesn’t regret turning down Jack’s deal and hopes that Jackson doesn’t make him pay the price for Jack going home.

Tommy winning HOH is Kat’s worst-case scenario as it wasn’t so long ago that he tried to flip the whole house against her.

Jackson goes to see Tommy and tells him that everything is now water under the bridge and tells him to play his best game with the HOH. Tommy is still dreaming about the six-shooters, Jackson is not on board but won’t tell Tommy because he has the power this week.

Christie asks Tommy who he is thinking of putting up on the block, he says Kat and Cliff. Christie agrees, Kat is dangerous in the house with Holly so they need to get rid of her. Tommy thinks Kat is a dangerous player and competition beast.

Cliff visits the HOH room to speak to Tommy. Cliff says that he is ready to make promises and commitments, but he is not part of a group, so he can’t make an agreement for any other people. Tommy says that if he puts him on the block, he is not his target. In fact, Tommy wants to play the game with Cliff moving forward.

Kat goes to Jackson and starts crying, telling him that she is so frustrated. She then goes to Tommy and tries to find out what he is going to do, but she knows he is going to put her up. She tells him she has heard rumors that the six are getting back together, he says it is not true and she knows he is lying.

Everyone is called into the living room and Tommy announces that for the past eight days America has been voting to send three houseguests on America’s field trip. Those three houseguests will compete in a competition that can drastically change their game. The winner of the competition will be safe for the week, the second will receive punishment and the houseguest who comes in last will be a third nominee this week.

Who did America vote for? Jackson, Analyse and Christie. Players have to get into their gear and go on their fieldtrip. Christie goes into the diary room and starts crying that she was chosen, she thinks America doesn’t like her. Jackson thinks this could be the best thing for his game; he could be safe, and have Christie on the block with no blood on his hands.

Analyse goes to see Tommy and asks him if he wants her to throw the completion and put herself on the block as the third nominee, he says no. Christie comes in the room and tells them that if she gets on the block, Holly and Jackson are getting rid of her. Analyse mentions to Christie that she could throw the completion because she is not a big threat. Christie says she is freaking out.

The players head outside to Cluck Cluck Island. Outside of their chicken coup, they have maneuver an egg from one side to the other; once they have an egg they launch it down a ramp to knock down letters to spell S A F E. Christie is so bad at this competition and Analyse is having a hard time throwing it without letting the other houseguests see that she is throwing it. Jackson starts helping Analyse, he tells her to shake the eggs, it helps when they roll down the ramp to hit the letters.

Cliff is with Nicole and tells her it is the perfect setup, as long as Christie stays on the block. It will all come down to the Veto competition.

Analyse goes to see Tommy and says sorry to him, she says that Christie was so bad at the game that she just couldn’t throw it without the rest of the house knowing what she was doing.

Christie can’t stop crying, Nick feels bad for her and says that if he wins the Veto he will use it on her. This is really bad, Tommy can’t believe that Christie could go home on his HOH.

Analyse is called to the diary room to get her punishment, she has to be a chicken for an entire week. Nicole has a tremendous fear of birds and trying not to make it show on her face.

Kat goes in to see Tommy, she tells him that she loves having Christie in the house and doesn’t plan on getting rid of her (she is lying and telling him what he wants to hear).