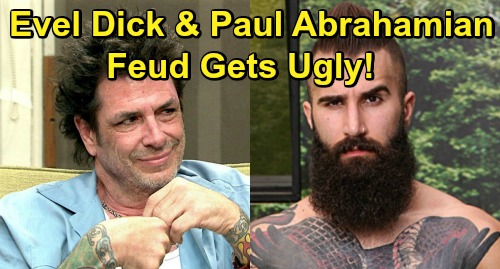 Big Brother alums Richard ‘Evel Dick’ Donato and Paul Abrahamian picked up their three-year feud recently, just on the eve of the Big Brother 21 kickoff, and it is getting a little out of hand. Dick has made a point to trash Paul every chance he gets and from the sound of it, Paul is trying to take the high road and ignore him.

Evel Dick appeared on Season 8 (and won) and on Season 13. He left the game early in Season 13 to deal with a personal issue.

Paul Abrahamian was the Season 18 underdog. He was on the block often and he always managed to find a way to escape eviction. He made it to the end with Nicole Franzel, only for her to win the game. Big Brother brought him back the following season and he lost again, taking second place, to Josh Martinez.

The trouble with that is, Dick is very hard to ignore. He has a large fanbase and some of those fans have baited Abrahamian into arguments only to make fun of him later.

Someone asked Evel Dick if Paul should have won one of his played seasons. Dick replied that he should have won Season 18 but Season 19 he was a terrible player. The comments got a little out of hand from there, with he and his fans making fun of one person who stood up for Paul’s gameplay in BB19.

Paul has tried to remain positive and not comment on any of the negativity. He has Evel Dick block so he cannot see the near constant harassment. Meanwhile, Dick constantly attacks Abrahamian’s game play and his character.

A Twitter user asked Paul how he could claim he isn’t a bully when he dressed up as a snake on Season 19 to expose Dominque Cooper.

Abrahamian replied, “You’re an idiot if you think I was trying to racially bully someone on national television. I dressed up as a snake so I could beat Dominique to the punchline of calling me a snake & trying to expose my game in front of the whole house.”

A few days ago, Dick poked fun at Paul’s “friendship bracelet” scenes on BB19, stating he won’t be buying one from his store because he doesn’t need to be his pal. It was a clear dig at CBS’s friendship bracelet when they had Paul give out rubber bands to people he wanted to keep safe.

The truth is many of these people attacking Paul are Evel Dick’s followers. And, to attack Paul over comments he’s made in the house and yet not use Dick’s words as a player against him is hypocritical. House behaviour needs to get a bit of a pass since after all these people were trying to win a game.

Hopefully, the feud will die down and they will stop trashing each other on their Twitter feeds once the new Big Brother 21 season starts Tuesday, June 25. Big Brother fandom is big enough for the two of them to have equal amount of fan love Don’t forget to come back to CDL for more Big Brother 21 spoilers, news, and live feed updates!

the shitty people in this thread that are making fun of this dudes physical features, are often the same people who harass & berate these houseguests for being “shitty people” on a reality TV game show… https://t.co/kR2nYtwXCu