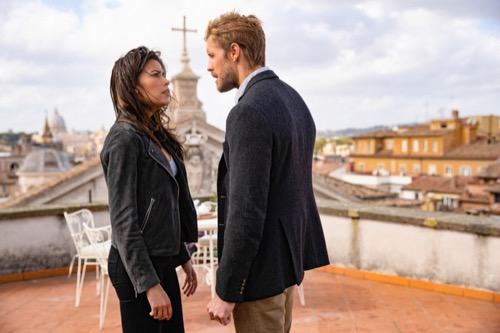 Tonight on CBS, Blood & Treasure airs with an all-new Tuesday, July 30, 2019 episode and we have your Blood & Treasure recap below. On tonight’s Blood & Treasure season 1 episode 12 as per the CBS synopsis, “As Hardwick helps Danny and Lexi try to outmaneuver the Brotherhood, Danny learns shocking revelations that shatter everything he thought he knew about his past.”

Tonight’s episode of Blood & Treasure looks like it is going to be great and you won’t want to miss it, so be sure to tune in for our live Blood & Treasure recap at 10:00 PM ET! While you wait for our recap hit the comments and let us know how excited you are about Blood & Treasure.

Everyone went back to Father Chuck’s apartment. It turns out they needed an impartial third party to help them decide if Jay Reece was the mastermind behind Farouk and Danny, of course, was arguing differently. Danny loves Reece. Reece was basically the father he never had and he didn’t want to diminish the man in any way, but there was evidence proving Reece wasn’t as innocent as Danny wanted to believe. There was the henchman named Yates. Yates was there when Cleopatra and Antony have stolen again. He also attacked Gwen. Gwen couldn’t dig into him because she didn’t have a name before and so she wanted to dig into him now. The only one stopping her is Danny.

Danny said they needed to focus on the bioweapon. Farouk’s men still have in their possession and everyone knew how dangerous it could be. There was already evidence of what the bioweapon could do. The bad guys had merely weaponized the spores of a dead body and those spores have killed before. The last killed a woman in nineties that went by the name of Farouk. They didn’t know if it was related to their Farouk. His real name was Rasheed Hagazi. Everyone just assumed he pulled the name out of thin air and so it didn’t start making sense until Gwen revealed her information. She was the one that pursued Fabi’s off the books investigation. It led to her finding out that someone wrote a check to Zara Farouk and the last person of that name was supposedly dead.

The real Farouk had even gone to great lengths to cover up the means of her death. She didn’t want anyone knowing that she was tomb raiding when she picked up this “mummy cancer” and so it wasn’t until she was dead that information got out. This connects to Farouk that the team knew because their Farouk wanted to kill people the same way Zara Farouk died. So did the two know each other? This also begs to question how Yates is involved with Farouk. It was Farouk’s men that were clearinghouse and Yates was seemingly working with them. Was he doing so on Reece’s orders? Lexi and Gwen believe he was. They pieced together their own theory and they suspect Reece was funding Farouk’s mission.

They theorized that it all fell apart when Farouk began acting on his own accord. Farouk wanted revenge for the deaths of his family and that’s why he wanted to attack the west. Only he could have gotten his first start because of Reece. Reece was a wealthy man and he wanted to find Antony and Cleopatra. He’s been wanting to do so since he was a child. His father had been the one to tell him about the missing tomb and how he came close to finding the location because of a German he interrogated. This woke up the spark in Reece. He tried to find it on his own to no avail and then he took over his father’s company. He gained billions of dollars. He could, therefore, afford to pay others to do his search and unfortunately, he picked the wrong guy with Farouk.

Lexi and Gwen’s theory seemed plausible. The only one that didn’t want to believe it was Danny and so he agreed to split up the team. He and Shaw went after Yates meanwhile Lexi and Gwen decided to find evidence to back up that theory. They connected the dots thanks to Fabi’s research and they followed it back to Ghazal. Ghazal was the dirty Egyptian official. He was also the guy that passed on information to Farouk and that’s how he was able to escape capture so many times. Lexi had found out about it and she used to justify stealing from Ghazal. She stole several documents from him. Most of it was later stolen from her by the Brotherhood and so the investigation that Fabi had on the side was from that stolen documents.

Lexi had never gotten to see it before. She was seeing it now thanks to Fabi and so she tried breaking into Ghazal’s vault again. She could have done it in her sleep, but what was the point when it was clear that Ghazal did a runner. He wasn’t at the office and his home seemed cleared out. Lexi and Gwen were still at the man’s house when they ran into Danny and Shaw. The guys had been following Yates. Yates went to the house and he might very well have killed Ghazal. So the two teams joined up. They followed Yates when he left the building and Danny even jumped on his car to stop him. It didn’t slow down Yates any. And so Lexi had to ram him off the road with her own car.

Sadly, they inadvertently killed Yates as they were trying to stop him. There was nothing they could do about it and so they looked into Yates’s last known location. They then found his secret apartment from there or at least they thought it was his secret apartment. They all went to the location believing it was solely Yates and they didn’t suspect otherwise until they saw the painting. The painting was called “The Death of Cleopatra”. It was the only painting that was never recovered after some benefactor paid Danny’s dad to steal several paintings to cover up the theft of that one and so odds are that the apartment belonged to Reece. It wasn’t until he saw that painting that Danny’s faith was shaken.

Danny first believed that Lexi was being irrational in the way she suspected Reece. He thought that it was because of her personal attachment to the Brotherhood that she didn’t want to suspect them and so he apologized. He apologized for such a large blind spot. Danny’s whole world view had been shaken once he saw that painting and it made him think of his “luck” over the years. The many scholarships he received as well as his entry into the FBI. The FBI wouldn’t normally have taken someone with a felon for a father. Danny realized that and that’s why he knew Reece greased the wheels. He also wasn’t sure now if he could ever trust Reece again. Reece has consistently lied the whole way and that’s why he cut his mentor out of the loop.

Danny found out, with some help from Simon Hardwick, that it actually had been the Brotherhood that stole the tombs. The team ended up recovering it with a fake bank heist and Gwen playing with both sides of the law. So they recovered Antony and Cleopatra. The tombs were then handed over to Reece and Reece wanted to open an Egyptian museum with them as the highlight. Danny chose that exact moment to confront Reece. He demanded that Reece tell him everything and the man only told him about his part in the Fensgate Heist. He went on to tell Danny that he’s been like a son to him and so Danny couldn’t find it in himself to push. He left Reece alone and later Reece received another guest.

Ana went to Reece because she told him that Farouk’s men would use the opportunity to attack. She also learned that Zara Farouk was actually their Farouk’s mother and that Reece was Farouk’s father.

Reece had set up a trust fund for his son, but Farouk used the money to fund terrorism and so Reece did everything possible to bury the secret of their connection.

Reece even killed Ana so that the truth would never get out.