Bold and the Beautiful Spoilers: Hope Gets Another Love Interest After Split from Liam – Steffy Misses Out on New Man? 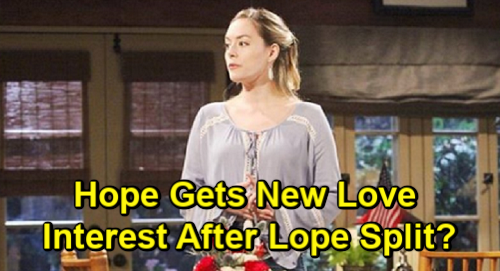 The Bold and the Beautiful (B&B) spoilers tease that Hope Logan’s (Annika Noelle) relationship with Liam Spencer (Scott Clifton) seems destined to crash and burn. B&B appears to be inching Liam back in Steffy Forrester’s (Jacqueline MacInnes Wood) direction, so what does that mean for Hope? They can get by with the love triangle for a while, but Hope may eventually need a different love interest.

Of course, many fans have been rooting for Steffy to get a new man instead. The “Steam” pairing still has some loyal supporters out there, but there are other fans who just aren’t feeling it anymore. They’re over Liam’s constant waffling and would rather see him just stick with Hope.

However, The Bold and the Beautiful spoilers point to more Steffy and Liam bonding instead. They’ll grow closer over the next few weeks, which will certainly spell trouble for “Lope.” If Steffy doesn’t steal Liam away, Hope could easily drive him away with jealousy. Liam and Hope are poised for serious trouble any way you slice it.

Since Liam and Steffy are probably going to get back together, Hope could wind up in someone else’s arms. Naturally, it’s doubtful somebody brand-new will walk into Hope’s life. If they aren’t casting a fresh hunk for Steffy, there’s no reason for them to do it for Hope either. It seems more likely that B&B will dip into their usual love interest pool, which leaves limited options.

Even so, there’s one pairing that some viewers have been rooting for. Ever since Noelle took over the role of Hope, there’s been a push by some fans for a reunion with Wyatt Spencer (Darin Brooks). It might be worth revisiting a Hope and Wyatt pairing, especially since a Steffy and Liam reunion appears to be brewing.

Wyatt’s been torn between Florence “Flo” Fulton (Katrina Bowden) and Sally Spectra (Courtney Hope), but Bowden’s set to spend six and a half weeks away from B&B. She’ll be filming a movie in Australia, so that could shake up this love triangle. Regardless, there are problems in Sally and Wyatt’s relationship. If he’s got such strong feelings for Flo, things just aren’t going to last with Sally. Nothing lasts forever on a soap anyway!

The Bold and the Beautiful always has to have a love triangle cooking though, so it’d be interesting to insert Hope in this one. Flo’s the one who helped Reese Buckingham (Wayne Brady) pull off the baby swap scheme. She’s the reason Hope missed out on so many of Beth Spencer’s (River Davidson and Madeline Valdez) first milestones.

It’d make sense to plop Hope into a different love triangle sooner or later. We can certainly imagine Flo and Hope fighting for Wyatt’s heart! B&B could play up that rivalry they established through Flo’s betrayal. That might give Liam and Steffy some time to settle into their happy life together before the next round of drama.

Are you ready to see Hope with someone besides Liam? Should B&B give Wyatt and Hope another try? The Bold and the Beautiful spoilers say the excitement’s about to rev up, so don’t miss what’s in store. We’ll give you updates as other news comes in. Stay tuned to the CBS soap and don’t forget to check CDL often for the latest Bold and the Beautiful spoilers, updates and news.