The Young and the Restless Spoilers: Lola Too Hard on Kyle – Y&R Fans Frustrated with Forced Kola Angst 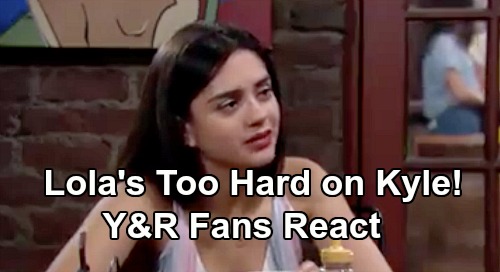 The Young and the Restless (Y&R) spoilers reveal that Lola Rosales’ (Sasha Calle) behavior has become concerning. Many Y&R fans are getting a little fed up with the way Lola’s treating Kyle – and it’s establishing a troubling pattern. Is it time for Lola to chill out? Should she grow up a bit and accept that nobody’s perfect?

Of course, we should point out that this has nothing to do with Sasha Calle’s performance. She’s been a natural from day one and has a smile that lights up the screen. Calle made Lola quite likable from the start, which is why it’s frustrating that Y&R eventually took the character down a controlling path.

We get that Lola probably picked up that nasty habit from her controlling mom, Celeste Rosales (Eva LaRue). We also get that there’s probably going to be some shocker that proves Lola was right to worry about Kyle Abbott’s (Michael Mealor) history. However, that’ll just bring more of that pattern we mentioned: Lola complains, Kyle grovels, and they ride the wave until another one hits.

The Young and the Restless acts like Kyle was some terrible person before he met Lola, but that’s not true. For example, Y&R fans will recall how sweet Kyle was after he found out Mariah Copeland (Camryn Grimes) had feelings for Tessa Porter (Cait Fairbanks). He went to a great deal of trouble to set up an unexpected date, which kicked off their romantic relationship. This was long before Kyle approached Lola’s food truck.

Kyle was never some unfeeling monster, and he’s an even kinder soul now. He’s settled down and is focusing on what he really wants. Shouldn’t that be enough for Lola? Why does she care what Kyle did in New York? People have baggage. That’s life! Kyle has grown up since those days, but maybe Lola still needs to do some of that – at least in terms of understanding what an adult relationship is.

No one will ever forget the infamous purse dumping. Who breaks up with someone over a handbag? There aren’t many other characters on canvas who would’ve done the same in Lola’s position. A lecture would’ve been more appropriate – or better yet, a “thank you.”

Lola seems to have lightened up since then, but there’s more work to be done if she’s so stuck on who Kyle used to be. The show isn’t pleasing viewers with this side of Lola. Those who don’t like Lola like her even less. Even Lola and “Kola” fans are annoyed since the angst doesn’t feel genuine. This couple needs drama, but there are better ways of achieving that.

Hopefully, we’ll get to more of those better ways as time goes on. The Young and the Restless spoilers say some bombshells are in the works, so maybe Kyle will at least earn the criticism for once! Do you think Lola’s too hard on Kyle? We’ll give you updates as other Y&R news comes in. Stay tuned to the CBS soap and don’t forget to check CDL often for the latest Young and the Restless spoilers, updates and news.