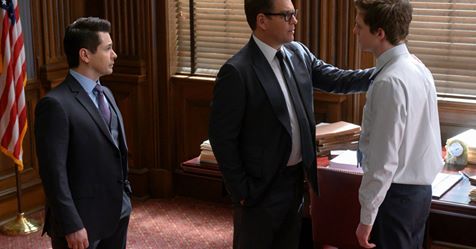 Tonight on CBS their drama Bull inspired by Dr. Phil McGraw airs with an all-new Monday, April 29, 2019, episode and we have your Bull recap below.  On tonight’s Bull season 3 episode 20 called, “The Good One,”  as per the CBS synopsis, “Bull fears that his client’s family ties will negatively impact the jury when TAC represents the seemingly innocent young heir, Connor McCandless, of an infamous crime family on trial for murder with his brother. As the trial begins, Bull aims to convince his client to sever his trial from his brother’s, which would pit the siblings against each other in court.”

Judge Weston Stanley was murdered. He was killed right before he was supposed to sentence a career criminal Donovan McCandless and it was believed that Stanley would have given the man a good twenty-five years. It would have been the rest of Donovan’s life. He wasn’t a young man and so he didn’t want to end his days behind bars, but where he crossed the line was when he talked to oldest son Brendan about killing this judge. His son admired him and he also had a record. Brendan had no problem with killing a federal and he didn’t think he’d have to worry about conspiring with his father in front of his mother. Collen McCandless loyal and its because she didn’t want Brendan to get hurt that she sent his brother after him. Connor tried to stop him and Brendan went ahead with his plan anyway. He killed the judge and now both and his brother are facing the death penalty.

Brendan jumped in Connor’s car after he killed the judge. He had to pull a gun to get him to drive, but it technically makes Connor just as culpable because he was the getaway driver and so now Collen was trying to fix her mistake. She went to Bull and she asked him to help her younger son. Connor was at school and he never took part in the family business. He still has a future and his mother chose to save him because she couldn’t save both of her sons. She wanted to hire Bull and he said that he would have to meet Connor first. He went to go see him with Benny in prison and they just wanted to get a feel of Connor’s character. He seemed like a nice kid and so why wasn’t he telling the authorities the truth? He had tried to stop his brother and was forced to go along with him because Brendan pulled a gun. Connor could be freed if he testifies against his brother.

Only Connor didn’t want to do it. He said that he couldn’t help them convict his brother in a death penalty case and so he didn’t even want to speak up in his own defense. Connor didn’t want to be responsible for his brother’s death, but staying silent wasn’t an option because there was just too much against him and so Bull decided to take his case. His team didn’t like it. They thought that defending a judge killer much less a McCandless was going to be an uphill battle and they had been right. Benny tried to separate Connor’s case from Brendan and the judge irrational. She refused to hear his motion and tried to hold him in contempt because he hadn’t been given the right to argue said motion. Benny was forced to keep his mouth shut when she extracted two thousand dollars from him.

Benny still tried to help his client and so he worked with Bull on picking the right jury. They wanted to find outliers and people who wouldn’t hold Connor’s family against him, but even with the right jury things were tough in court. The prosecution brought incredible witnesses who saw Brendan kill the judge and Connor driving the car. No one saw the gun and to make things worse Brendan later turned on his brother. He agreed to a plead guilty in exchange for not receiving the death penalty and all he had to do was say that it had all been his brother’s plan. It was Connor that wanted to kill the judge and he came along to make sure that Brendan did it. He was going to lie and possibly kill his brother if it meant he could live. Connor didn’t get why Brendan would do that to him because he had always been loyal and so they had to break the cold hard truth to him.

Brendan doesn’t care about Connor. Connor has to start thinking about himself and thankfully his mother convinced him to fight back. He was going to go up against Brendan’s claims in court by testifying himself. Brendan had to go first which everyone thought would be a disadvantage, but Brendan never made it back to court. He was killed in prison and so now there was just Connor. Someone needed to pay for the judge’s death and without Brendan, there was just Connor. Connor also went to the same school as the guard that killed his brother and so Connor’s own defense team had to ask if he arranged his brother’s murder. Connor denied it of course and said that he hadn’t seen the other man in years. And so Benny told him that it was best they get a continuance in order to give the jury some time to forget Brendan’s murder.

It turns out the jury didn’t need time. They all believed that Connor was responsible for killing the judge and his brother. So they ignored the new witness. The defense found a witness that testified that Brendan pulled a gun on Connor to get him to drive and it hadn’t mattered. The jury was against Brendan and so Bull needed to pull out the big guns. He went to go see Donovan in prison and he convinced the man that he could still save his legacy by putting everything behind Connor. Connor was the good son and even Donovan knew it. He testified that he talked to Brendan about killing the judge and that his son had nothing to do with it. He also said that Connor couldn’t hurt anyone because he wasn’t the type and he had to be escorted from the courtroom because he wouldn’t stop saying Connor was innocent.

The jury was told to forget his testimony and that’s never worked. They later found Connor not guilty based on that testimony and it wasn’t until Connor was free that Bull figured out who killed Brendan.

It wasn’t Connor, it was Collen.