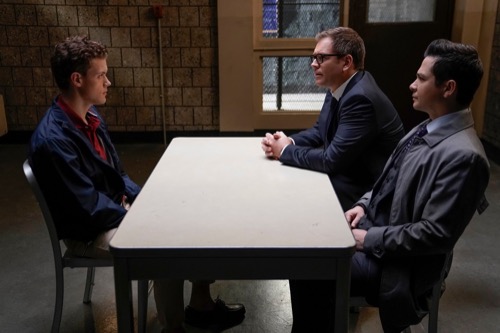 Tonight on CBS their drama Bull inspired by Dr. Phil McGraw airs with an all-new November 4, 2019, episode and we have your Bull recap below.  On tonight’s Bull season 2 episode 7 “Doctor killer,” as per the CBS synopsis, “The Bull is having a hard time defending his client who confessed to accidentally killing his mother’s doctor.”

Tonight on Bull, a woman named Lily who is diagnosed with cancer that’s spreading to her brain has limited time to live is given the opportunity to try new medicine to try to help the cancer, Dr. Weber tells the family it’s in the first phase clinical trials.

She’s given 12 weeks to live but her brother and son tell dr Weber they want to try it , eventually lily dies and her brother Jonathan confronts Dr. Weber while out at a restaurant and tells him that he found out from a reporter the drugs have never been used in a human and Dr. Weber admits to this they have a heated discussion and Dr. Weber walks away.

Jonathan walks into Bill’s office admitting to killing the Dr by pushing him 50 feet into a concrete pit, Bull decides to take him as a client stating he feels he is innocent. The team gets surveillance cameras from the neighborhood and they see Jonathan and his nephew Andrew on the camera, Bull comes to the conclusion that Jonathan didn’t kill Dr. Weber but his nephew Andrew did.

Jonathan admits that the night of the incident he told Andrew he saw Dr. Weber and Andrew confronts him, yelling and screaming about killing his mother but the Dr keeps turning his back and Andrew pushes him into the pit.

Andrew ends up turning himself into the precinct Bull and Benny go down there to represent him, Andrew states he turned himself in to prevent his uncle from taking the blame.

Chuck tries to prepare Andrew for what to expect in the courtroom and tells him he needs to look like he cares for the crime. During the trial, Jonathan is called to the stand and questioned about the night of the incident and he’s asked what took place.

During the questioning, the prosecutor plays a tape of Andrew being aggressive towards a hockey player during a game to paint him as violent. The nurse who worked with Dr. Weber is questioned about Weber’s practice and him not telling the patient about the drug not being used on a human being before.

Rentzel does some digging up into Dr. Weber and the pharmaceutical company that lily was given the medication from and it turns out they paid Dr. Weber to find a patient who had cancer to try the drug and they also gave him a $500,000 in advance and two years to do this, but all the other 17 patients he told the drug about and how it’s never been tested on human said no, and with only a week left to his contract he approached Lily, leading the team to believe he didn’t tell Lily the risk in order to complete his contract and not be liable to pay back the $500,000 advance given to him.

During the trial, the pharmaceutical company is called to testify and they confirm Dr. Weber only had a few days to repay the money given to him and that the drugs haven’t been proven to work on humans, Andrew decides to take the stand and he’s acquitted of the crime.

Chuck continues to deal with some personal family issues with his daughter and he reassures her she didn’t let him down.