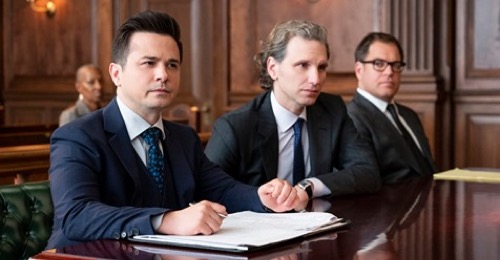 Tonight on CBS their drama Bull inspired by Dr. Phil McGraw airs with an all-new November 18, 2019, episode and we have your Bull recap below.  On tonight’s Bull season 2 episode 8 “Safe and Sound,”as per the CBS synopsis, “The Bull is having a hard time defending his client who confessed to accidentally killing his mother’s doctor.”

Bull was representing a young man that killed his brother. Charlie Crawford and his big brother Theo were home alone when they thought about playing with their father’s gun and Theo collected it. Theo was the one who knew the combination code. His dad told him when he turned seventeen and he swore he wouldn’t tell his younger brother about it, but then he did. They were home alone and bored. Theo showed Charlie the gun and Charlie wanted to play with it. He thought he was in some kind of cowboy movie.

Charlie first shot it at a wall. Nothing happened because both boys thought the gun was empty and so neither of them thought there was any real danger. His brother Theo also tried to take the gun back. He wanted to put it away before their parents came home and so Charlie tricked him in order to play with the gun a little while longer. He bought himself a few minutes alone with the gun while Theo checked to see if their parents really did come back early. Then Theo came back and again he tried to take the gun.

Charlie also was so busy playing with it that he turned on his brother. He fired it because as he told the police he believed it was empty and instead he shot and killed his brother. It had been a horrible accident that no one could have foreseen. Therefore, Bull and Benny pleaded with the ADA to lower the charges against Charlie because his parents had already lost a child and it would be cruel to take the last one they had left. The ADA seemed like she wanted to help. She agreed to go lighter on Charlie and then out of nowhere she wanted to talk to Charlie’s parents.

The ADA asked Eric Crawford why he gave access to a weapon to a minor. He tried to explain that he goes on business trips and that he just wanted his family to be safe when he was gone. Eric showed Theo how to operate a gun. He even showed his wife how to operate and so there was never any real danger until one day when they had this horrible accident. Unfortunately, the ADA didn’t seem to care about that. She just saw criminal negligence and so she charged Eric Crawford. The ADA wanted to try Eric for being an irresponsible father.

She also didn’t care how she went about because the first witness she later called was Charlie. Charlie was badgered about the day his brother died and the ADA asked him about the post-it Theo had had in his hand. It was a message from their father. It had the access codes to the safe as well as the gunlock on it. The post-it had blood as well. Benny was able to stop the ADA from further traumatizing the young boy and so she quickly moved on to something else. She somehow managed to find footage of the shooting range.

In it, there was Eric on the phone and it was his teenage son carrying the gun. It was so clear that Eric wasn’t fully taking precautions that even if his own wife walked out of the courtroom. Lena Crawford wanted to stop coming to court after that. She accused Eric of being so busy on his phone that he accidentally left a bullet in the gun and Eric swore that he emptied it. He last remembered emptying it. Eric and Lena were back in the court the next day and they listened as the EMT described what she saw when she arrived on the scene.

Her description had moved everyone to tears. The team even got some Greens out of the crowd and so it should have been a win, but Bull felt there was something missing. He had noticed that the EMT didn’t talk about how distraught Charlie was. She had mentioned the mother and the father and not the brother. Bull found that odd. He then went back to the 911 call of that day and it gave him such a feeling that he felt he had to investigate Charlie. Charlie didn’t seem to care that his brother was dead. He didn’t then and Bull thought he was just acting now.

Bull suspected Charlie was a sociopath. He later told his team that the 911 call sounds as if Charlie was trying to get his story out there and that he didn’t even care that his brother was dead. Charlie also showed no genuine grief when his parents. His parents were weeping over their dead son and Charlie felt nothing. Bull suspected Charlie killed his brother on purpose. He then went about proving it and he later showed the evidence to Lena and Eric. He showed them the notebook Charlie kept in which he tried several codes to break into his father’s safe and they also showed him Charlie’s online footprint.

Charlie has been planning to kill his brother for a while now. It turns out the gun had really been empty and that Charlie had loaded it. He googled a how-to video online. He had the knowledge and when he had those few minutes alone with the gun he then put that knowledge to use. Charlie was dangerous. And if this case sent Eric to prison, Charlie was going to be home alone with his mother, and he could potentially hurt her.

Bull tried to get Lena to see that. But she couldn’t picture her last surviving child that way and so the only one that saw Charlie for the danger that he is was his father. Eric asked Bull if Charlie could be cured. He wanted some hope and unfortunately Bull couldn’t provide that nor could he report Charlie because they were still a part of his legal defense. The parents were the only ones that could report him. They didn’t want to and so Bull forced them to open their eyes. Bull separated them from Charlie and he pushed Charlie into admitting that he killed his brother.

Charlie thought he was safe because Bull was a part of his legal team. He didn’t know that perjury (which he committed when he was on the stand and said his brother’s death was an accident) had freed Bull from any obligation. Bull and Benny later reported the incident with Charlie. The ADA decided to drop the charges against Eric. She was now going after just and she was going to charge Charlie with murder.

And sadly neither Lena nor Eric were ever going to forgive Bull for that.