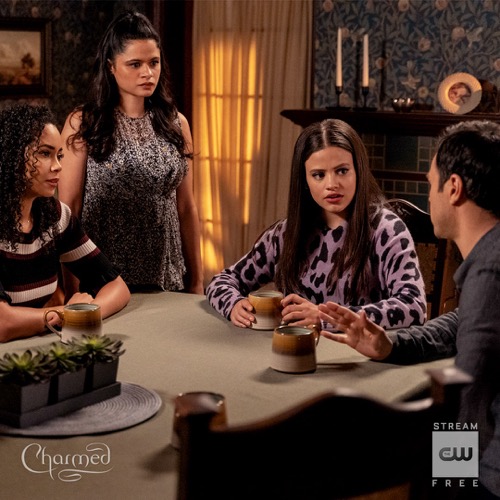 Tonight on CW their reboot of the 1980s popular show Charmed airs with an all-new Friday, December 6, 2019 episode and we have your Charmed recap below! On tonight’s Charmed Season 2 Episode 8 “The Rules of Engagement,” as per the CW synopsis, “Maggie (Sarah Jeffery) makes a life-changing decision that her sisters and Harry (Rupert Evans) fear will destroy her.”

Tonight on Charmed, Maggie turns down Parker’s marriage proposal, he says they can change things for the better between witches and demons but she turns it down saying she’s too young and not ready.

Back at the house, Harry is healing the witch Layla who got hurt protecting the magical communities by demons unfortunately the others were taken. Mel wants to counterattack but the rest disagree and then Maggie decides to marry Parker to become family to attempt a truce between the two sides of demons and witches. Macy and Mel try to talk her out of it and seek other options but fails.

Maggie goes back to Parker and asks him to release the other witches to be released from the attack and he does. Parker tells Maggoes about the demon oath which is where the other demons vow to protect him the overlord and any family attached to him if they get married which would mean any attack on witches by demons would be forbidden. But Godric and another witch have a plan to try to stop the union.

Mel, Macy, and Harry try to come up with a way to prove the wedding shouldn’t happen. Mel decides to do a spell that runs her into a fly so that she can get information on Parker which is a curse, and in order to break it, she has to self reflect on something she needs to fix within herself. In an effort to speed up the wedding and stop attacks Parker and Maggie decide to get married immediately, she doesn’t trust Godric.

Mel and Macy discuss the drawing of Harry in her journal and she reveals it wasn’t him but of the dark lighter, Mel tells her that Harry admitted to having a feeling for her and suggest to Macy she should give it a shot.

As a fly Mel goes into a room where Parker and Godric discuss the attacks and it’s revealed the demons stoke the ape from the magic tree, as Mel is buzzing around Godric swats the fly to the floor and she realized it’s time to break the curse and self reflect on inner issues in a mirror and it works, she goes off to tell Maggie what she earned about the attacks on the scared Grove and the apples, but as Mel tells her how she found out the information Maggie gets upset that she went behind her back to do this betrayal and asks her to leave the house but before she does she tells Maggie to check Parker’s office for the apples.

Harry and Macy continue searching for Abigail and they find her she quickly tells them about the assassination attack that’s planned for Parker and Maggie during the wedding, Abigail tells them she has a plan but they need to trust her.

Upset Mel is breaking a glass and makes a shocking discovery of black Amber dining from cement in the command center which is the source of their powers
Maggie checks Parker’s office and finds the suitcase of apples. Parker walks in after Godric makes it seem as if she’s stealing the apples from him, Parker tells her he ate one of the apples. He makes the decision to move forward with the wedding and Macy can tell that Maggie wants out of the wedding, Abigael moves forward with her an as Parker and Maggie walk up to the altar and Godric is about to perform the blood ceremony with the dagger they push Parker and Maggie and the rest escape and runoff.

Back at the house, the sisters apologize to each other for how they treated one another. As Maggie touched the substance of black Amber she gets a vision of Parker killing Jordan. The team rushes to stop it and set off a fire alarm to get the innocent people out of the way. The two men begin to fight and Mel freezes Parker with her powers from the Amber but he escapes and a battle begins and just as he’s about to finish his attack on Jordan Abigael stabs him in the back with a dagger,

Maggie frantically asks Harry to help heal him but because Parker ate the apple he’s immune to magic and he disappears into thin air as black smoke.

Abigail makes a move on Harry by kissing him and Macy sees this interaction between them. In the end, we see Parker locked up in a cell by Abigael as it was in her plans all along to get him vanquished by the sister and take over the thrown to become the new overlord.