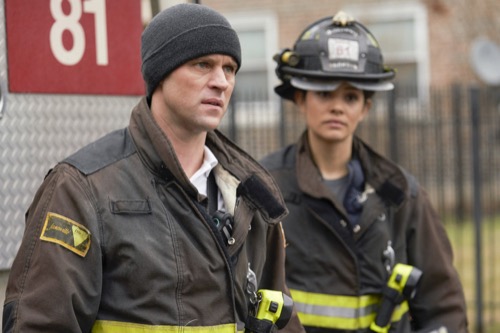 Tonight on NBC Chicago Fire returns with an all-new Wednesday, February 27, 2019, season 7 episode 16 called, “Fault In Him” and we have your Chicago Fire weekly recap below. On tonight’s Chicago Fire as per the NBC synopsis, “During an emergency call, an unsuspecting Lt. Casey suddenly finds his life in peril. Grissom (guest star Gary Cole) warns the firehouse that they will need to gear up for performance evaluation. Otis discovers he won a raffle prize at a recent fundraiser and Brett is met with challenges in her personal life.”

Tonight’s Chicago Fire season 7 episode 15 looks like it is going to be great and you won’t want to miss it.   While you’re waiting for our recap make sure to check out all our Chicago Fire recaps, news, spoilers & more, right here!

Chicago Fire begins with Matt Casey (Jesse Spencer) packing up his bag when there is a loud knock at the door. He opens Kelly Severide’s (Taylor Kinney) door to find Commissioner Grissom there to see Kelly. He talks about the red tape at work and how hard it is to get anything done; he admits he has an agenda and says the Mayor’s office is coming at him, saying the Master Key thing at 66. They put review taskforce together to review Firehouse 51 and he wants them to talk him up. Kelly feels he is doing it to make himself look good, as Grissom says he is just like his father.

Chief Boden (Eamonn Walker) talks to both Severide and Casey in his office about the task force as they are coming next shift. Boden does believe Grissom is going back to his firefighting roots in spite of how he got to the position. Mouch (Christian Stolte) walks in, talking to Stella (Miranda Rae Mayo), Herrmann (David Eigenberg) and Otis (Yuri Saradova) about who won all the prizes; they do have a winner as Otis won third prize, which is a sports package. The alarms sound along with a police assist and everyone races off.

There was a suicide call when a neighbor called in a gunshot; Matt immediately calls for Otis and Mouch so they can breach through the barred windows and barricaded door. They are able to pull the door, and remove several boxes; after Matt calls out that they are the fire department, CPD enters and clears the house before CFD walks in; turns out the man shot himself and CPD will call dispatch, but before Matt can leave he spots a man who charges at him, shouting that he wouldn’t listen and told the other man what would happen. He points the gun at Matt’s face. Matt struggles as the gun goes off and CPD returns, but Matt is clearly shaken.

Outside, Casey sits on the back of the rig when Stella brings him an ice pack, asking if he just gets bored when he isn’t getting shot at. Mouch angrily confronts CPD about “clearing the house”, but Matt takes the blame saying he should have called for backup when he saw him. It turns out this is a murder and the man with the gun was the victim’s brother.

Back at Firehouse 51, a delivery arrives, but Matt doesn’t want to deal with it. He tells Sylvie (Kara Killmer) that he is fine as Mouch tells her that Matt just got shot at. She goes to see Matt in the office, who isn’t sure if they need anything on the supply run. He insists he is okay as she reveals she knows what happened to him. She talks about her rough year, but the memory won’t go completely away but talking to someone is better than suffering alone. She will keep her ringer on for him if he needs to speak in the middle of the night.

Otis learns all the boxes of gear is a bribe from the commissioner to keep their mouths shut. Mouch gets a message about Otis’ prize, sharing he gets to shoot the puck between periods at a Blackhawks game for a chance to win $10,000. Otis is upset that he can’t skate, nor play hockey. Herrmann says they will teach him at his place. Emily (Annie Ilonzeh) places a bet on him and everyone agrees, but Otis isn’t so confident.

Kelly leaves a message for Grissom, saying if he wants to buy praise from 51, maybe he shouldn’t have made it so obvious. Boden says he is the one who ordered the equipment, asking Kelly to put the CFD and the firehouse first as no one is going to find fault with 51. Kyle Sheffield (Teddy Sears) is happy to see Sylvie and promises to see Matt after he is done at the hospital. She is called out, but not before they book another date night.

Sylvie and Emily arrive on the scene where their patient, Frank had left a cage open and his spider bit him. They thought the venom couldn’t hurt humans, but they learn that it could if the person is allergic to it. Emily finds out Frank plays league hockey so when they return to the firehouse he is willing to help Otis with his slapshot. He feels he has it covered in watching tutorials and Herrmann teaching him. Emily warns him about her trying to help him before taking the number back into her pocket.

Matt wonders if Grissom is on his way out as Kelly wants to know if he will go with him to meet a couple of the guys from another firehouse to see what is going on, but Matt just wants to go home. He hears a knock at home and finds the Chaplain there, asking to come in saying he heard Matt had a tough shift. Matt insists he will get over it as Kyle says it is his duty to check in on him. He gets Matt to recant what happened, saying Brett is the one who told him; something Matt isn’t pleased about. Matt thanks him for coming by but prefers to put this thing behind him. Kyle wants him to talk to someone about it, if not him. Matt looks up Gabby’s number but doesn’t call.

At Molly’s, Herrmann says this is his first practice, it is a slow night and everyone needs entertainment. His first shot, he hits a table and knocks their drinks down; second shot he smashes glasses behind the bar so Herrmann brings him to behind the bar, saying lesson is over; Emily doubles her bet for Otis to win.

Kelly meets with two guys who reveal not a single person on the review panel is from the CFD, worrying why everyone turned on Grissom right away, everyone thinking Grissom’s time will be very short as commissioner. At the firehouse, Boden informs everyone that the panel will want to speak to everyone individually. Kelly gives an apology to Grissom for believing he was behind the gear. He also reveals Tuesday is there as he knows there is an animal lover on the panel.

Brett goes to see Kyle, who is upset. She learns he stopped by Casey’s who started to talk but then kicked him out. He is unable to explain as he is called to the ER where there is a very sick child that doesn’t have time. Brett wants to know what is wrong so Kyle promises to call her. When the ambulance returns to 51, Grissom introduces Boden to the panel but they are called away; Boden asks Grissom if he wants to ride with them and he does.

They arrive to heavy smoke with the fire in the rear of the house, there are kids stuck on the third floor. Inside the burning house, the find the husband who says his wife is in the basement. Matt walks the ladder to get the kids out while Kelly hears the wife in the basement; but the stairs give out under him and everything falls.

Outside3, Kelly gives a Mayday and he is stuck in the basement, Cruz (Joe Minoso) doesn’t answer so Boden and Grissom gear up to rescue Kelly. The woman is unconscious so they pull her out by rope, where Brett and Emily are able to take over; somehow the panel is at the scene and catches everything that happened. They say it was amazing and feel they have seen everything they have. Kelly says the Commissioner didn’t have to put in there and most political figures wouldn’t, but it is clear Grissom is a firefighter and is doing for the fire department because he loves this job. When everyone leaves, Matt reaffirms to Boden that he is “all good!”

Kyle returns to his office, sorry for how cray work has been. He hugs Brett who admits she is worried about him, especially after he went to see Casey. Kyle says he cannot see Brett anymore as he loved spending time with her but he can’t do his job when he is dating a colleague as people will not open up to him when they are not sure they can trust him. She says she understands that is what happened with Casey and won’t blame him. She knows he is good at his job and won’t get in the way of that. She pushes him away, saying he is doing the right thing but breaks down around the corner.

Herrmann and Mouch are rooting for Otis, saying they will see him on the weekend; but he tells them they don’t have to come. Emily brings Kevin in to coach Otis; mocking him as he was shooting with a left handed stick on concrete and he is taking him to the rink for a real training lesson.

At the game, Emily encourages Otis and the firt shot is way off but the second one is so much closer. Otis shoots the last one and gets it in. Everyone celebrates Otis’ victory. Kelly goes to see Grissom to tell him he looked good the other day. He says he is sticking around as the taskforce has given him his blessing. He admits he wasn’t into politics at all, but this was one way of going to bat for the department, which is no different than racing into a fire to save a victim. Kelly joins him for a drink.

Matt knocks on Boden’s door, who invites him in. Casey begins to talk about the suicide call and the shot at him. He wants to add that no one did anything wrong but he can’t get it out of his head that he almost called Gabby about it. He can’t go backwards as it almost killed him to move on. Matt breaks down, saying that was the second shot, the first one the gun jammed and that is the only reason he is alive right now. He left it out of his report because he can’t explain it. He wants to know why he is still there? Boden talks about going left instead of right in a burning building and this just wasn’t his time. Matt doesn’t believe it is that simple as Boden tells him he just has to keep moving.