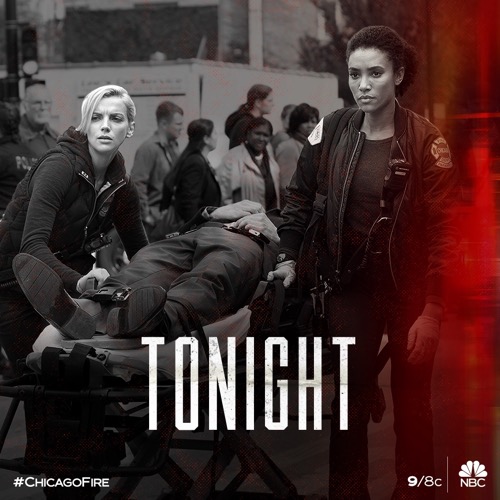 When the cause of an apartment fire hits close to home, Herrmann is on a mission to get to the bottom of it. Kidd finds herself burning the candle at both ends.”

Tonight’s Chicago Fire season 8 episode 8 looks like it is going to be great and you won’t want to miss it.   While you’re waiting for our recap make sure to check out all our Chicago Fire recaps, news, spoilers & more, right here!

Kelly arrives at his new position. He hasn’t been given an office yet at OFI but a stack of paperwork to get down. Meanwhile, the chief tells Sylvie and Stella they will be heading up conditioning. It is a great opportunity for them. Later, at breakfast, they talk about how Stella’s rent is being raised. She needs money. They get a call to home. Inside, a woman is screaming for help. Her living room is engulfed in flames.

Chris brings the hose inside and manages to put the fire out. The woman is brought to the ambulance. She tells them the fire started in the living room. She grabbed her extinguisher but it exploded. Something doesn’t seem right so Chris goes in and looks around with the guys. They find something strapped to the bottom of the couch.

Matt and the Chief enjoy a cigar. They talk about Kelly working at OFI. They both hope it’s brief and not a long term position. Kelly talks about a case with Seager. Something isn’t looking right about a grocery store fire he needs to approve. He tells the chief he wants to take a ride over there. The chief says yes but reminds him he needs to just approve not investigate.

Chris takes what he has learned back to the chief and others. The woman’s couch was basically made of polyurethane, causing it to light up like a Christmas tree. He also noticed it was made by Arnow Furniture. Chris wants to go talk to them.

Kelly and Seager make their way through the grocery store that is shut down and filled with damage. They find the origin point of the fire. Kelly pulls some of the old wirings from the sheetrock. It was an electrical fire.

Chris and Matt arrive at Arnow Furniture. They speak with the VP of Relations who tells them their furnaces is labeled with a hazard. They explain to her that one of their own died because of their furniture. The VP doesn’t seem to care, offering a fake, insincere apology. Chris is angry and promises to do something about their dangers furniture.

Stella meets with her new class of cadets who she will be training. She is nervous when she starts but gets right into teaching.

Chris and the guys pull up lawn chairs in front of the furniture company until the CEO comes out to talk to them. Kelly shows up with Seager. The security guard makes friends with them and tells them the CO will be back next Wednesday. They invite him to the bar where they plan to come up with another idea.

At Sylvie’s gym, she is asked to run a few classes. She gives Emily’s name instead. She needs the money.

At the station, the guys hang out talking about what they plan to do about the furniture company when they get a call. They head there to find a frantic woman. There is a man named Dale on the ground bleeding from the head. He has lost sensation in both legs. Stella is slow to react and it is noticed. A large piece of metal fell from the building. He is pinned under it. The crew lifts the object and frees him getting him to the hospital.

At the gym, Emily runs her first class. She is relentless, making Sylvie think it was all a bad idea.

Kelly and Seager report back to the captain who is mad they spent time looking at a case. They explain that they discovered the case wasn’t suspicious. He warns them they need to move faster or Kelly will never make it back to the squad.

Stella meets with Matt to apologize for her poor performance. He tells her to get it together. She leaves after talking to the girls. She needs rest. She heads home to Kelly.

The station all meet. Chris tells them he may need some help from them. They all head to the furniture company just in time as the CEO arrives. Chris sets a couch on fire in front of the building while he tells him about the woman who suffered burns because of him. He gives the CEO a speech and a lot to think about. The man is shaken when they head to leave.

Seager asks Kelly about Casey. She thinks he is cute. A woman approaches them. She owns the grocery store. She thanks them. The insurance company is going to pay her claim so she can rebuild it.

Olivia from the gym comes to see Emily. Sylvie thinks it is to let her go but just the opposite. The CEO comes to the firehouse to see Chris to tell him he is changing the material of his furniture. Chris is overcome by emotions.