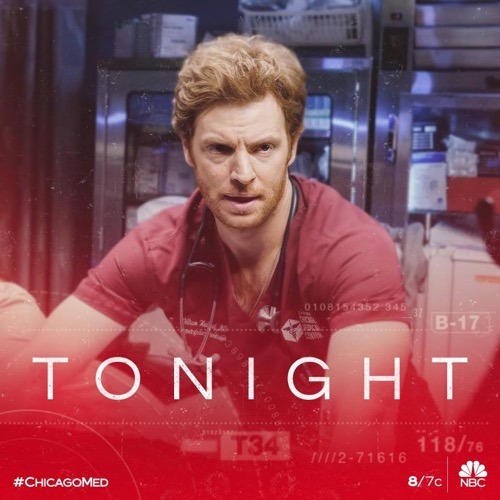 Tonight on NBC their medical drama Chicago Med airs with an all-new Wednesday, April 3, 2019, episode and we have your Chicago Med recap below. On tonight’s Chicago Med season 4 episode 18 called, “Tell Me the Truth,” as per the NBC synopsis, “Dr. Rhodes receives an alarming phone call that prompts him to rush out in the middle of an important surgery. Dr. Halstead comes to the aid of an FBI agent who is brought into the ER, but he suspects there is more to the story than he is being told. Dr. Manning and Dr. Choi find themselves on opposite sides of a major disagreement over doctor-patient confidentiality.”

A patient came in with stomach pains. Jenny Simpson was seventeen and was just finished visiting the college of her dreams when she began experiencing these pains and worried her parents. It was the parents that demanded they go to the hospital because they said it could be appendicitis and didn’t want to take any risks with their daughter. Jenny hated coming to the hospital and she didn’t want an ultrasound but was convinced of having it one and so that alone told her doctors something. They didn’t find anything in the ultrasound and that didn’t mean there wasn’t something there. Dr. Manning and Dr. Choi both think Jenny either had a miscarriage or her an abortion and that she didn’t want to tell her parents.

The doctors first ran some tests and once they determined that she had been pregnant they questioned her. Jenny said she panicked and that she bought some pills online. The medication she took was usual in her case and it’s also followed by another pill. The second medication she couldn’t get her hands on because she needed a doctor’s authorization and so by trying to go without she was stuck midway through an abortion. It explains why she was experiencing so much pain and luckily it could easily be fixed. They could give her the second medication and they wanted to, but Jenny said she didn’t want her parents to know. She said they would never forgive her for what she did and that they would refuse to understand.

Manning didn’t want her patient to suffer from undue stress and so she was fine with not telling the parents, but Choi pointed out Jenny was minor. They would need her parents’ authorization to treat Jenny for her botched abortion and so before either doctor could make a decision they brought it to Goodwin. Goodwin was already dealing with additional budget cuts and a VIP that demanded to have Dr. Rhodes be his doctor that the hospital didn’t want to walk into the minefield that was Jenny’s case. Jenny was from Indiana where she couldn’t get an abortion without her parents’ consent and that’s why she ordered the pills online. She was a teenager struggling with an adult choice and didn’t feel like she could trust her parents.

Jenny’s case got to Manning on a personal level and that’s why Manning was willing to bend the rules for her, but Choi didn’t feel the same way. He thought the parents had a right to know and his constant bickering with Manning wasn’t helping the situation. They looked to Goodwin to make a choice and she said she wait until they hear back from the hospital’s lawyers. The lawyers would decide how much responsibility the hospital could take on and until they got back to everyone the doctors weren’t allowed to give Jenny the second pill. Except Jenny developed complications and had needed quick treatment. Manning was going to ignore the parents and Choi chose to purposely withhold the truth. He told them that their consent was needed to administer medication and they agreed.

Goodwin didn’t mind that they intervened because the patient clearly needed it, but she heard back from legal and any additional measured used would have to come with the parents’ full consent. Everyone was hoping that all the tissue left Jenny’s body and unfortunately it didn’t. She needed surgery and so they needed consent. They got Jenny’s mother away from her husband and Mrs. Simpson gave her consent. She just asked that her husband never know. He wasn’t Jenny’s biological father anyway and, while he didn’t know that, his wife was willing to use the information to ensure he never knew about the surgery. He was very religious, and it would ruin their family if he ever found out.

Elsewhere in the hospital, Rhodes risked his career as a surgeon because he received a call that said Robin had been kidnapped and he believed it. He left his patient to Dr. Bekker and warned Dr. Charles what was happening, but he didn’t explain himself to anyone else and just flew to the bank where he did his best to get the money fast. It was while he was there that Charles and the police found him. It turns out the whole thing was a scam. The people that called the doctor never had Robin and they had used another woman’s screams to scare him. Dr. Rhodes returned to the hospital where he found Robin in pristine condition and he left her to surgery where he wasn’t needed anymore.

Dr. Bekker had handled the situation on her own and so now was the time for Rhodes to explain himself directly to Goodwin. Goodwin’s job had also come under risk when Rhodes ran out on a VIP and she wanted to hear everything if she was going to fight for both of their jobs. She later managed to smooth things over with the bosses and they learned that their VIP wasn’t even upset because he was simply so grateful towards Bekker. Bekker caught a lucky break when Rhodes was forced to leave surgery and as he began thinking about it he couldn’t help notice that someone must have knew him pretty well for the scammers to find out about Robin much less how to get into contact with him so easily.

And while Choi was happy that at least one of Jenny’s parents knew the truth, he still wasn’t comfortable with all the dishonesty because he thought the father deserved better than that. Choi went to April’s apartment because he knew she was keeping secrets from him and wonder if it was another guy. Only it wasn’t a guy issue. April was hiding Emily at her place because Emily came back to Chicago with her older married boyfriend and her boyfriend has seemingly left her to return to his wife. The only one that hasn’t realized that yet was Emily and that’s why she didn’t want her brother to know she was back in town because she knew he would judge.