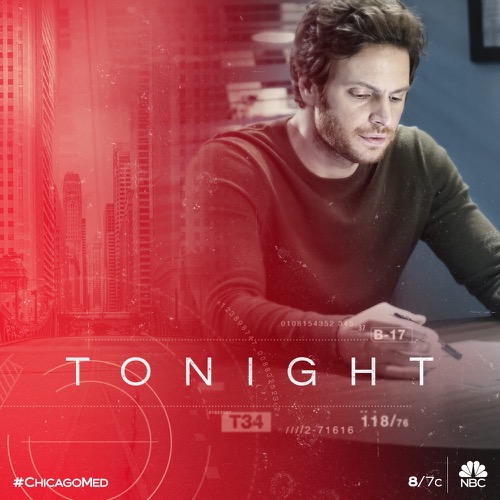 Tonight on NBC their medical drama Chicago Med airs with an all-new Wednesday, January 9, 2019, episode and we have your Chicago Med recap below. On tonight’s Chicago Med season 4 episode 10 Winter Premiere called, “All the Lonely People,” as per the NBC synopsis, “April finds herself in a dangerous situation and Natalie gets an update on Will. Dr. Rhodes gears up for a gala honoring his hybrid O.R. and tries to convince Dr. Bekker to join him.”

A deranged individual tried to kill a few nurses outside of the hospital. Luckily, he got into a car accident right after he began shooting and so he soon needed the services of the same nurses he tried to kill. He was brought into the hospital and was identified as Dennis Mitchell. Mitchell claimed that “femi-Nazis” were the enemy and that they all deserved to die, but somehow that became about just killing women and so the hospital made sure he was treated by men. Dr. Choi treated him when he hadn’t wanted to. Choi had learned that Mitchell had shot April and while April was going to be okay it didn’t mean that the doctor wasn’t affected.

Choi still cares about April and so it was better for everyone when he finished treating Mitchell because who knows what might have happened if he had stayed in the room longer than absolutely necessary. Choi had turned over Mitchell to Charles. Charles was supposed to diagnosed Mitchell and see if he mentally fit to be under arrest, but then he thought he could turn Mitchell into a lesson of sorts and so he demanded that Student Dr. Curry assist him. Charles remembered that Curry had a problem with empathy and he wanted to test that with this latest patient even though Curry as a woman was going to receive misogynistic crap from Mitchell.

Mitchell went off when Charles came into the room with Curry. He called the female doctor “femanoid” and refused to talk to her because he preferred talking to Charles. Charles was the listening ear as Mitchell said that a “Stacy” turn him down for a date and how that wasn’t fair. Mitchell claimed that no woman was willing to love him because they preferred meathead “alphas” and were truly the fools. Mitchell had said quite a few buzzwords that indicated that he might have gone online and had a social media presence. So Charles later asked Curry to check it out for him and she had been upset with that order.

Curry said she still had a dissertation to write and so she didn’t want to waste her time looking into a nutjob. Only Charles didn’t care about personal feelings and Curry had to do the job. She found several messages from Mitchell on social media that were alarming and it began when he said he wasn’t attractive enough. He said that he looked skinny and weak, but then someone told him to get plastic surgery and that’s what he did. He went to the hospital for plastic surgery and as he was recovering he began to harass Monique. Monique had to ask to be transferred because Mitchell kept demanding they go on a date and it made Monique feel uncomfortable to even be around him.

Monique’s ultimate rejection and the fact that plastic surgery hadn’t changed things for him was what Mitchell claims made him the way he is. He said that women were denying his right to sexual pleasure and that he shouldn’t be a virgin because women were too blind to see him for the wonderful person he was. All of it was just Mitchell being incredibly lonely. He chose to blame others when he couldn’t blame himself and that’s why he went on a rampage. Mitchell was going to kill Monique when April got in the way and protected her friend. Both April and Monique chose not to miss a day of work and they each wanted Mitchell transferred to jail.

There was just one problem with that. Mitchell developed some complications and so Choi had to keep him around until Mitchell recovered. So the nurses didn’t like that and April tried to talk Choi into releasing Mitchell but Choi was still the man’s doctor and he also had a point to prove. Choi was with his ex Vicki now and Vicki had come to the hospital to see him because she heard what happened. She wanted to check that everyone was alright and wanted to know how Choi felt about it because what she really wanted to know was how he felt about April being injured. And so Choi said that April wasn’t a factor when he treated Mitchell and that in itself became true when he chose the patient over his personal relationships.

Mitchell still needed to properly treated and so Charles went to see him again with Curry. Curry showed little sympathy for Mitchell and she snapped when Charles tried to surmise whether Mitchell felt any remorse. Mitchell didn’t because he still blames everyone else for his own problems and so Curry gave him a cold dose of reality. She told him that he was the weak one and that he should have used his gun on himself and so Charles had to drag Curry out of the room. She didn’t see what she did as wrong and she refused to apologize for it. She was doing her best and she told Charles to back off.

Charles did for a while but then he tried to once again reach Curry and they were having their talk as Mitchell was finally deemed healthy enough to be sent to prison. Everyone breathed a sigh of relief after that and Choi admitted to April how he really feels. He told her that he still cared about her and then he walked away before it got awkward. But there were a lot of moments like that one! Manning had treated a baby whose mother died during delivery and she had also tried to help the woman’s widow because she knew what it was like to be left alone without answers. And at first she thought it was just because of her late husband but she had been lonely when Halstead left as well.

Halstead was able to return to her now after weeks have passed and the Burkes were all in jail, but it was hard to act like nothing was wrong and that he hadn’t hurt her when he left. Especially as he came back a different person and was now carrying around a gun. Halstead never used to believe in getting one and the fact he did just became something else to drive this couple apart.

Charles later talked to Curry about what he believes is depression and he tried to ask the young doctor if she ever thought about hurting herself.

Curry denied feeling depressed and again she tried to distance herself from Charles because he had gotten a little too close.

Curry had lashed out at Mitchell because she recognized some of Mitchell’s loneliness and that’s why she had gotten upset.

But she wasn’t the only one hurting because Monique blames herself for what Mitchell did and it’s a good thing she has her fellow nurses as friends because it turns out she was lonely too.