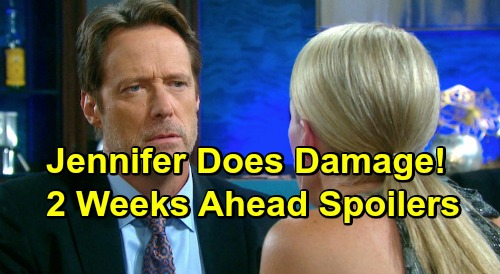 Days of Our Lives (DOOL) spoilers tease that Jennifer Horton (Melissa Reeves) will do her part to help Haley Chen (Thia Megia). If she can’t do that, Jenn will at least want to help anyone else Jack Deveraux (Matthew Ashford) might target. Jennifer doesn’t agree with Jack’s harsh stance on immigration, and she’s quite certain the old Jack wouldn’t agree either.

However, Eve Donovan (Kassie DePaiva) has made Jack her mayoral puppet. She’s running the show and Jack’s buying into her way of thinking. Since Jack doesn’t have his memories to rely on, he’s lost sight of who he used to be. Jack just doesn’t have the same compassionate heart anymore, so Jennifer will really let him have it during the week of March 18-22.

Days of Our Lives spoilers say an explosive interview is coming up. Tension will erupt as Jennifer grills Jack and gets him flustered. He’ll be on the hot seat when it comes to the real issues of Salem, so Jack may find that he’s not very well-informed. After all, he gave a rather flimsy answer when someone recently asked him about his views.

The truth is Jack doesn’t know what he believes. He can barely think for himself with Eve breathing down his neck constantly. Days spoilers state that Jennifer will do her best to damage Jack’s campaign. Jennifer isn’t a vindictive person, so it’s not that she’ll set out to hurt Jack. She’ll just know this isn’t the real him.

Jennifer obviously thinks Abe Carver (James Reynolds) should remain in the mayor spot. The town would be better off without Jack as their leader. He doesn’t care about the people of Salem like Abe does, and nothing’s going to change unless Jack gets his memories back.

Of course, Days of Our Lives spoilers say Jack will experience total recall sooner or later. DOOL’s just dragging this out for drama’s sake. Will Jack ultimately secure Dr. Wilhelm Rolf’s (William Utay) formula? Will he be willing to use the serum or will Eve convince him it’s a bad idea? It’s possible Jack will remember all on his own down the road.

Jack’s already had some things from the last pop in his head. It’d be a twist if the power of Jennifer’s love was enough! Regardless, Jack and Jenn still have a long way to go before their happily ever after. We’ll give you updates as Days news comes in. Stay tuned DOOL and don’t forget to check CDL often for the latest Days of Our Lives spoilers, updates and news.