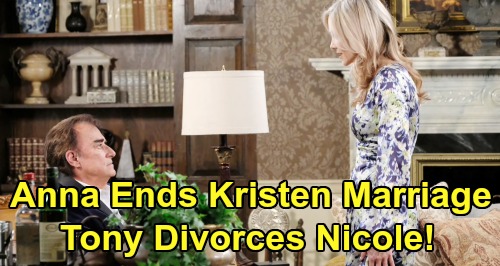 Days of Our Lives (DOOL) spoilers tease that Anna DiMera (Leann Hunley) will soon be back in Salem. It’s been a while since Anna was on canvas, and the last time DOOL viewers saw her, she was carting around an urn containing what she thought were Tony DiMera’s (Thaao Penghlis) ashes. She’d actually talk to the urn and call it “Tony,” so clearly she wasn’t over her ex’s death!

Well, now Anna will be back, and DOOL spoilers say she’ll be in for a big surprise when she finally comes face-to-face with Tony. It seems that Tony will have some explaining to do, since he’s supposedly been dead for about a decade now. Anna’s probably going to be furious, and she’ll want to know exactly where he’s been and what he’s been up to over the past 10 years!

But something tells us that Anna’s going to really hit the roof when she finds out that not only has Tony been alive for years and kept it from her, but that he’s currently married to a much younger woman…Nicole Walker (Arianne Zucker).

Anna DiMera’s Presence Will Have Huge Effect On Tony DiMera

Of course, he’s not really married to Nicole, since she’s actually Tony’s sister Kristen DiMera (Stacy Haiduk) in disguise, but it looks like Anna won’t be privy to Kristen’s existence.

Still, Anna’s presence in Salem will have a big effect on Tony. Anna is the love of Tony’s life, and he’s likely going to want to do whatever it takes to make her happy. And that’s apparently going to mean breaking off his partnership with Kristen and his sham marriage to Nicole pronto! According to Days of Our Lives spoilers, Tony will tell Kristen that he wants a divorce from Nicole shortly after Anna reappears in Salem.

Of course, that will surely infuriate Kristen, who will still be hoping that she can somehow finagle her way into DiMera as Nicole. She might still be hoping that she can convince the DiMera board to remove Gabi DiMera (Camila Banus) as CEO and put her in the CEO position instead. However, that’s probably just a pipe dream at this point, since it looks like Gabi intends to stay CEO for the foreseeable future.

But it looks like staying Mrs. Tony DiMera won’t be in the cards for Kristen. So, what will Kristen do from here? Of course, one option would be to try to force Tony into staying married to her.

Although Kristen doesn’t really seem to have anything to hold over Tony’s head. It looks like he’ll probably go ahead with the divorce, leaving Kristen to come up with another plan.

It will be interesting to see what Kristen does from here, and where she turns for help next. Tony was an important ally for Kristen, so what do you think her next move will be? Stay tuned to DOOL and don’t forget to check CDL often for the latest Days of Our Lives spoilers, updates, and news.