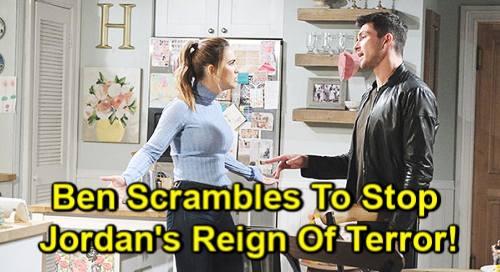 Days of Our Lives (DOOL) spoilers tease that Jordan Ridgeway (Chrishell Hartley) will lose all control during the week of October 28-November 1. The trouble will start when Jordan realizes her plan has gone awry. DOOL fans know Jordan baked some cupcakes for David’s birthday party, including one that was poisoned just for Ciara Brady (Victoria Konefal).

Jordan believes she labeled the correct cupcake, but did she really? It doesn’t seem like it since Rafe Hernandez (Galen Gering) will collapse after the party. Days of Our Lives spoilers say Jordan will discover what she’s done and flip out in the week ahead. Meanwhile, Rafe will recover – presumably at the hospital. Once some test results come back, that could tip Rafe off to Jordan’s plot.

Rafe won’t be able to prove anything yet, but his suspicions will definitely be on the rise. He’ll feel like Ciara and Ben Weston (Robert Scott Wilson) may have been right to worry! Jordan clearly isn’t well, and things are only going to get worse.

Ben Weston Will Suspect His Sister In JJ Deveraux’s Attack

Days of Our Lives spoilers say JJ Deveraux (Casey Moss) will manage to get in Jordan’s way. He’ll find himself on the receiving end of an attack, so Jordan will be stuck in a downward spiral.

Ben will eventually get updates on JJ’s attack and most likely suspect his sister was behind it. He’ll be hot on Jordan’s trail, but there’s much more mayhem to come. Days of Our Lives spoilers say this year’s Halloween episode will bring some excitement. DOOL usually goes with a fantasy, but could it be real this time around?

Jordan’s set to help Claire Brady (Olivia Rose Keegan) escape from Bayview, which would be reasonable due to Jordan’s deteriorating mental state. However, the drama will continue even if it’s just some Halloween fun. Later, Days of Our Lives spoilers say Ben will scramble to find Jordan before she strikes again. He’ll fear Jordan could hurt or kill other Salemites, especially Ciara.

Jordan Ridgeway Truly Believes All Her Deadly Delusions Are Real

Jordan will certainly spark some deadly fears as this storyline winds down. It’s possible Jordan will land in prison, but that wouldn’t be entirely fair since she’s obviously got mental issues. Jordan truly believes her delusions. She belongs back at Bayview with stricter security – or perhaps at a better facility since they never should’ve let her out in the first place.

Ben suggested that Jordan’s doctors got it wrong, so they may ultimately admit their massive error in judgment. Jordan genuinely thinks she’s doing the right thing here, but it’ll bring some horrific outcomes in Salem.

Will Ben finally bring Jordan’s reign of terror to an end? Regardless, this time jump should halt things and pick up the next chapter of the chaos. We’ll give you updates as other Days news comes in. Stay tuned to DOOL and don’t forget to check CDL often for the latest Days of Our Lives spoilers, updates and news.