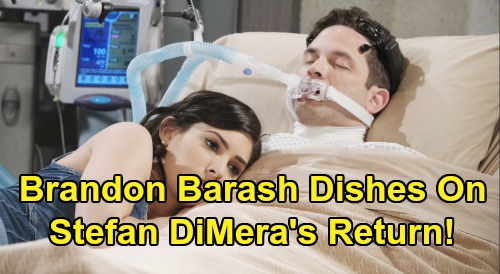 Days of Our Lives (DOOL) spoilers tease that Salem will soon mourn the passing and exit of Stefan DiMera (Brandon Barash). As DOOL viewers know, Stefan was accidentally shot by Lani Price (Sal Stowers) as she was firing upon a gun-wielding Vivian Alamain (Robin Strasser) in the park. Vivian was on the run for her attempted murder of Kate DiMera (Lauren Koslow) and wasn’t about to go down without a fight. Unfortunately, Vivian’s decision resulted in Stefan’s terrible fate.

Well, from here things look bleak for Stefan. He’s currently on life support with no brain activity, which means that he will never wake up. That will force Gabi DiMera (Camila Banus) into a difficult decision – she’ll ultimately relent to giving Stefan’s heart to an ailing Julie Williams (Susan Seaforth Hayes) and save her life. But Gabi and viewers will have to say a sad goodbye to Stefan, which will be tough.

In a recent interview with Soap Opera Digest, Brandon Barash spoke about his short stint as Stefan. As viewers will remember, Brandon took over the role of Stefan from Tyler Christopher, who originated the role back in January 2018. In September 2018, Brandon assumed the role and his character then famously got together with Gabi, and “Stabi” fans have been thrilled ever since.

But now “Stabi” fans are wondering whether Brandon will ever return to the role down the line. It’s a valid question, given the popularity of the Stefan/Gabi pairing, and given that coming back to life seems to be a relatively common occurrence on Days of Our Lives, especially for the DiMera family. So, what does Brandon have to say about all of that?

Well, first off, Brandon confirmed that his stint as Stefan was actually longer than originally intended. “I knew when I took over the role, I was only supposed to be there a couple weeks or a month, maybe two months the most,” he said. “It ended up being six or seven. I was very grateful for the time I had there.” That’s a good thing, because those extra couple of months ultimately led to his pairing with Gabi.

But what about his exit? “They just said they’re moving on with the character and the storyline,” Brandon stated. “No ego here. I didn’t take it personally. I was just grateful for the time I had.” And about an eventual return, Brandon was noncommittal. “I would never say no to a meeting. We’ll have to see. We’ll have to cross that bridge and see what I’m up to if and when the opportunity knocks.”

DOOL buzz is that Stefan may be already back filming at the show, but viewers will have to wait to see whether that possibility ultimately becomes a reality. But with Dr. Wilhelm Rolf (William Utay) now running around Salem working his magic, like when he brought Kate back to life recently, you never know. Could Stefan be secretly saved by Rolf, with Julie actually getting someone else’s heart on the sly?

Stranger things have certainly happened on DOOL, and the possibility for an eventual Stefan return is something that “Stabi” fans will be hoping for. Do you think that we’ll see Stefan back in Salem someday? Stay tuned to DOOL and don’t forget to check CDL often for the latest Days of Our Lives spoilers, updates, and news.