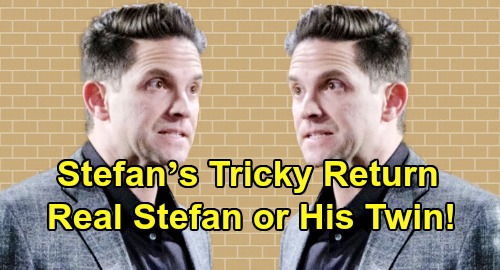 Days of Our Lives (DOOL) spoilers tease that Camila Banus (Gabi DiMera) is getting her sizzling scene partner back. Many DOOL fans loved Banus’ onscreen chemistry with Brandon Barash (Stefan DiMera). It was crushing to see “Stabi’s” love story cut short! However, there’s always a way to make things right in the soap world – and that’s exactly what Days intends to do.

So far, there’s been no official confirmation on Barash’s return, but you can trust that he’s indeed returning. This is coming from insiders who have never been wrong! Days of Our Lives probably just wants to let the drama of Stefan’s funeral play out first. It’s best to let this time jump happen first, too. Once everything settles down a bit, there may be more Stefan news.

Of course, there’s plenty of time to speculate about Barash’s comeback. Due to the show’s filming schedule, it’ll take several months before he can get in the action again. Once Barash is finally back on screen, will it be as the real Stefan or Stefan’s twin? There are pros and cons to each option.

Let’s start with the real Stefan. Bringing him back would spark Stefan and Gabi’s reunion, which would leave “Stabi” fans thrilled. They were the main ones rooting for this comeback, so Days may decide to give the people what they want! There was a lot of untapped potential in this love story, and it’d be wise for the show to continue it.

Naturally, that’d require some rewrites to fix the donated heart situation. Sarah Horton (Linsey Godfrey) saw a man who looked just like Stefan on the operating table. Julie Williams’ (Susan Seaforth Hayes) new heart came from someone identical to Stefan – someone they cut open right there in the hospital. There’s just no getting around that.

What does that mean in terms of getting Barash back on canvas? There are a couple ways Days of Our Lives could take this. One is that Stefan was swapped with a lookalike shortly before his surgery. That could be an actual twin, a doppelganger or even someone wearing a realistic mask like Kristen DiMera (Stacy Haiduk) wore. After all, Kristen fooled everyone by pretending to be Nicole Walker (Arianne Zucker)!

Dr. Wilhelm Rolf (William Utay) could’ve easily pulled off this switcheroo and stashed the real Stefan elsewhere. We’re not buying the idea that Dr. Rolf the miracle worker couldn’t save him. Even so, that’s not the only route Days could take. They could also leave Stefan’s death alone and bring the lookalike into the story later. Stefan might have a twin or a random doppelganger that’ll ultimately enter the picture.

There would be some perks with that angle, too. Gabi could feel drawn to Stefan’s lookalike, but there’d be some resistance from both of them. DOOL could rebuild the love story from scratch, but they’d keep the same chemistry.

Plus, it would eliminate Stefan’s creepy history, which some fans found difficult to get past. We all want to forget when Stefan was following Abigail DiMera’s (Kate Mansi) alter around like a nutjob. Stefan clearly violated Abby by sleeping with her when she wasn’t in her right mind. The “Gabby” storyline was a mess!

Nevertheless, many viewers still want the real Stefan. Barash’s version was far different from Tyler Christopher’s. In some ways, it was easier to accept Stefan’s history with Barash in the role. He brought a certain sweetness and boyish charm to Stefan, so it almost felt like a brand-new character.

No matter which direction the show heads in, it’s great that Brandon Barash will return to Salem. Do you want the real Stefan back or would you prefer a twin of some sort? Days of Our Lives spoilers say some hot drama’s brewing, so stay tuned. We’ll give you updates as other news comes in. Stick with DOOL and don’t forget to check CDL often for the latest Days of Our Lives spoilers, updates and news.