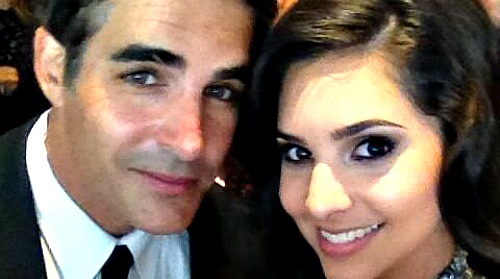 Days of Our Lives spoilers reveal what Gabi Hernandez is going to be up to in the future. Actress Camila Banus teased the information during a podcast with co-star Galen Gering. Shrunken heads, fan mail and more topics were discussed. Keep reading to get all the details!

The podcast began with Galen Gering, who portrays Rafe Hernandez on DOOL. Soon after starting, Camila Banus walked into his dressing room. The two began talking and of course, Gabi’s future in Salem was mentioned. The actress couldn’t reveal any solid Days of Our Lives spoilers, but did hint that “history repeats itself” with Gabi. This indicates that months from now, fans will still be seeing Gabi make bad decisions.

Days of Our Lives spoilers reveal that Galen Gering has some strange things in his dressing room. One includes something that resembles Santa Claus, except that isn’t what it is at all. It turns out that a few years ago, someone made a cast out of his face when he played an old man. However, it became warped and now is a shrunken head on his dressing room wall. How’s that for creative decorating?!

As far as Banus and Gering working together, both actors agreed that they love playing brother and sister on the soap. They genuinely enjoy scenes together, but what is interesting is the type of storylines they like the most. Even though most viewers tune in for the drama, Galen explained he loves the scenes most that are a bit calmer. He added that he loves when they have scripts that show their loving, yet frustrating, relationship as siblings.

Everyone who watches DOOL has a favorite character. For some, it is Gering and he receives fan mail daily. Some actors wouldn’t have time to actually read those letters, but Galen reads at least a few each day. In fact, the actor said that when he is feeling down, he opens up a letter from a fan and it instantly uplifts his spirits.

What do you think of Galen Gering’s shrunken head and Camila Banus teasing Gabi’s future? Would you like to see more scenes of the on-screen siblings together?