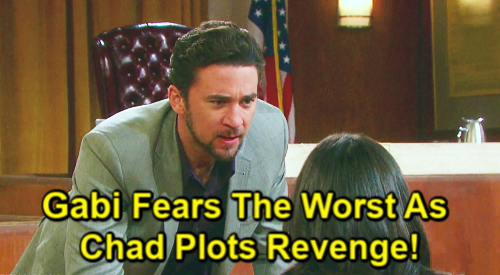 Days of Our Lives (DOOL) spoilers tease that the time jump on November 8 will pave the way to big changes in Salem. For starters, there’ll be couple of crucial returns.

Starting November 11, Chad DiMera (Billy Flynn) and Abigail DiMera (Kate Mansi) will be back in town. They’ll play a role in some major drama involving both their families – and even some enemies!

This time jump means we’ll skip a year in Salem, and comatose Jennifer Horton (Melissa Reeves) will miss that year, too. At least 365 days will go by while Jennifer’s stuck in a coma, but it won’t feel like it once she inevitably awakens. Of course, it won’t feel like it to fans either! It’ll be an instant change for everyone at home. The jump is just what is sounds like: a quick leap into DOOL’s future.

There’s no word yet on exactly when Jennifer will wake up, but she’ll have a reunion with Abigail and JJ Deveraux (Casey Moss) during the week of November 11-15. It’s possible JJ and Abigail will simply gather around comatose Jennifer in her hospital bed. She doesn’t necessarily have to be awake for the reunion, but Jennifer will indeed return to the land of the living eventually.

As for Chad, he’ll fill Abigail in on his contact with Stefano DiMera (Joseph Mascolo). That’ll be a fun story for Days to explore, but it seems Chad will turn his attention to something else for now: revenge.

Days of Our Lives spoilers say Gabi DiMera (Camila Banus) will confide her fears to Eli Grant (Lamon Archey) after the time jump. There’s a good chance they’ll be a couple by then, so Eli will want to hear Gabi’s concerns.

Days of Our Lives spoilers say Gabi will make an admission regarding Chad and his quest for vengeance. She’ll feel like Chad’s plotting against her – and he probably will be! DOOL viewers haven’t forgotten how Gabi changed Charlotte DiMera’s paternity test results and all the chaos that followed for Abigail. Chad hasn’t forgotten either, so he may make Gabi pay the price!

Since Gabi will be keeping the pacemaker secret and should be happy in her new relationship, there’s some prime revenge material. Chad could easily discover what Gabi’s hiding and expose the true reason Lani Price (Sal Stowers) broke up with Eli.

Whatever the case, Days spoilers say Gabi had better watch out! We’ll give you updates as other news comes in. Stay tuned to DOOL and don’t forget to check CDL often for the latest Days of Our Lives spoilers, updates and news.