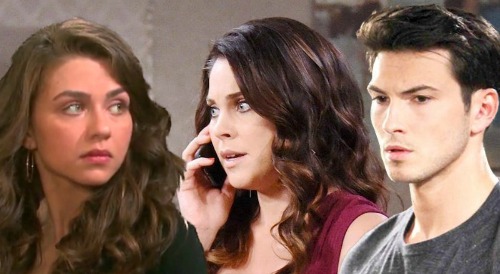 Days of Our Lives (DOOL) spoilers tease that Ciara Brady (Victoria Konefal) will corner Ben Weston (Robert Scott Wilson) and seek some answers. She won’t be happy about Ben going to work for Stefan DiMera (Tyler Christopher) again, but Ben will stand his ground. He’ll argue that it’s a helpful reminder to steer clear of Ciara.

Ben doesn’t want to hurt Ciara in any way, so his dangerous job is another reason to create distance. He’ll feel like he’s doing what’s best for Ciara, but she’ll insist this isn’t what’s best at all. Ciara is miserable without Ben in her life. It’s safe to say Ben’s miserable as well, so Ciara will want him to stop fighting this. She’ll push Ben to see that she’s a big girl and can handle this relationship.

Ciara will visit Ben at the DiMera mansion and attempt to change his mind about this Days romance. He won’t think it’s a good idea for Ciara to be there, but she’ll want to voice her complaints. Ciara will urge Ben to accept that they belong together. She’ll deliver a heartfelt plea and hope it’s enough to show Ben this can work.

Days of Our Lives spoilers say Ben and Ciara will lean in for a kiss, but a shocker will derail their warm moment. An assassin will confuse Ciara for Chloe Lane (Nadia Bjorlin), who’s been hiding out at the DiMera mansion. This man won’t know the difference between Ciara and Chloe – especially at a distance with Ciara’s back turned.

DOOL fans can expect gunfire and panic during the week of March 18-22. Days of Our Lives spoilers state that the hit man will just barely miss Ciara. He’ll fire a shot through the window, but Ben will pull Ciara out of the bullet’s path just in time. Other shots will follow, but those will miss Ciara, too.

Of course, Ben and Ciara will have very different opinions about this terrifying ordeal. Ciara will credit Ben with once again saving her life, but Ben won’t see it that way. He’ll argue that his world only brings danger, so Ciara is better off without him.

Days spoilers say Ciara will continue to fight for Ben and their future together, but he won’t make it easy! We’ll give you updates as other news comes in. Stay tuned to DOOL and don’t forget to check CDL often for the latest Days of Our Lives spoilers, updates and news.