Days of Our Lives Spoilers: Claire and Eve Team Up to Frame Ben for Cabin Fire – Eve Wants Paige’s Murderer to Pay 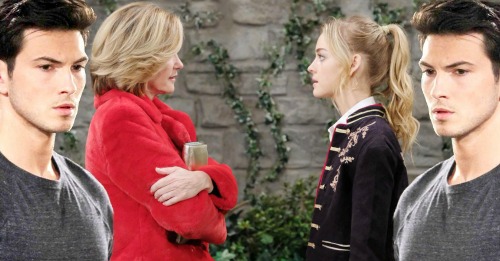 Days of Our Lives (DOOL) spoilers tease that a sneaky plan will soon be underway. DOOL fans know Claire Brady (Olivia Rose Keegan) was behind the cabin fire last year. She went there to save Ciara Brady (Victoria Konefal), but she ended up trying to kill her instead. Claire was consumed by her desire to eliminate the competition for Tripp Dalton (Lucas Adams), so she was willing to let Ciara die in the blaze.

Of course, Claire had a change of heart and returned later, but Ciara was already safe and sound. Claire breathed a sigh of relief, but that’s certainly not the case right now! She’s never been more on edge. Things are only going to get worse as JJ Deveraux (Casey Moss) closes in on the truth.

However, Claire will soon believe she’s found a way out of this mess. Days of Our Lives spoilers say the scheme will start when Claire comes clean to Eve Donovan (Kassie DePaiva) next week, April 8-12. These two have formed a nice bond lately, so Claire will choose to trust her. She’ll reveal that she’s to blame for the cabin fire and worry that she’ll go down for attempted murder.

Eve really does care about Claire, so she’ll decide to help her out. In fact, Eve will think this could be a mutually beneficial arrangement. Days fans will recall that Ben Weston (Robert Scott Wilson) murdered Eve’s daughter, Paige Larson (True O’Brien). She obviously wasn’t too happy when she learned Ben had been released from Bayview.

Eve attacked Ben in the park, but that wasn’t enough for her. She wants Ben to pay for what he did, so here’s her chance to make it happen. Days of Our Lives spoilers state that Ben will once again be set up. Eve and Claire will join forces to pin last year’s cabin blaze on Ben. They’ll hope they can frame him and take the heat off Claire permanently.

Hope Hernandez (Kristian Alfonso) has accused Ben of starting this fire many times, so Eve and Claire may not have to work too hard. They just need the Salem PD to believe Ben was the one who used that lighter. Ciara will once again have to prove she’s got faith in Ben and his innocence!

Some exciting scenes are coming up on the NBC soap. We’ll give you updates as other Days news emerges. Stay tuned to DOOL and don’t forget to check CDL often for the latest Days of Our Lives spoilers, updates and news.