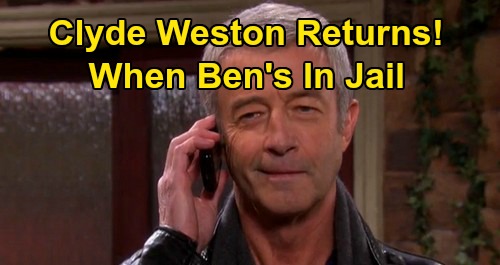 Days of Our Lives (DOOL) spoilers tease that a familiar face is poised for a comeback. This return hasn’t been confirmed just yet, but a very reliable insider insists James Read will reprise his role as Clyde Weston. There’s no word on how long Clyde will stick around, but we have a hunch about how he’ll reenter the picture.

DOOL fans have probably heard by now that the show will leap one year into the future on November 8. We’ll see several shockers at the beginning of the episode before the time jump twist. One of those shockers may involve serious trouble for Ben Weston (Robert Scott Wilson).

In the moments leading up to this bombshell, Ben will worry he may have to kill Jordan Ridgeway (Chrishell Hartley). Of course, Days isn’t going to undo all the hard work they’ve done to redeem Ben. He’s one of the good guys now, so the show should stick with that.

Killing his sister just doesn’t line up with the new vision for the character. It isn’t a road Days of Our Lives probably wants to take Ben down again. Strangling multiple victims in the past was more than enough.

Instead, Ben might be knocked out and awaken next to Jordan’s dead body. He could at least stumble across it just before the cops arrive. Whatever the case, Ben will find himself living a nightmare soon. His gruesome discovery on November 8 should set up his time jump leap, which most likely involves a prison stint. Days viewers may learn that Ben was convicted for Jordan’s murder and locked up.

That brings us to Clyde’s comeback. Will Ben encounter his father behind bars? There have been plenty of Clyde mentions lately, so that’s setting up this return. Ben had one scene in particular that may be significant.

When he was building David Ridgeway’s (Jaxton and Dexter Ellis) toybox, Ben surprised Ciara Brady (Victoria Konefal) by sharing a fond memory of Clyde. He followed it with another reminder of how horrible Clyde could be, but the point was his relationship with Clyde is complicated.

That was true when Clyde was free and roaming around Salem, too. Clyde genuinely cares about his son on some level, even if he’s a menace who can’t properly show it. Could Clyde actually be an ally to Ben behind bars? It might be interesting if Ben escaped in hopes of clearing his own name. Clyde has experience with escaping, so he could help with that.

However, Clyde could also just keep Ben company. Ben will need someone to lean on, and it might as well be his messed-up dad. Days of Our Lives spoilers say Ben will face heartache no matter what. Being separated from Ciara will be brutal, especially if she starts to doubt the changes in him! We’ll give you updates as other Days news comes in. Stay tuned to DOOL and don’t forget to check CDL often for the latest Days of Our Lives spoilers, updates and news.