Days of Our Lives Spoilers: Could Gabi Be Pregnant With Stefan’s Baby – Stabi Baby After Time Jump?

BY hellodrdavis on October 12, 2019 | Comments: one comment
Related : Days of Our Lives, Soap Opera, Spoiler, Television 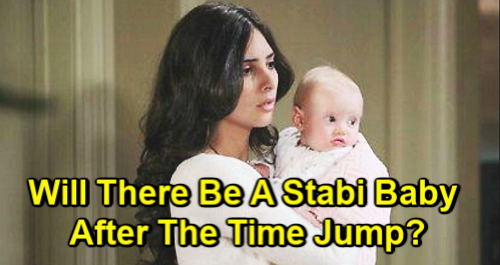 Days of Our Lives (DOOL) spoilers tease that Gabi DiMera (Camila Banus) will be in a great deal of pain in the days to come. She’s about to lose her husband Stefan DiMera (Brandon Barash), who is currently on life support with zero brain activity. She’ll make the difficult decision to remove him from the machines and donate his heart to Julie Williams (Susan Seaforth Hayes), which will be the toughest thing she’s ever done.

The move will be tough on “Stabi” fans, too. Even though it looks like there could be a twist coming, since there are rumblings that Brandon Barash could be back taping at DOOL, fans are mourning the loss of Stefan. And Gabi will be in deep mourning, too, but could there be a big surprise for her down the road?

We can’t help but wonder whether Gabi could get some very unexpected news in the weeks to come. As DOOL viewers know, Gabi unfortunately spent some time in prison, during which she was severely beaten by another inmate. The experience was awful, but the worst part of it was that the beating rendered her unable to bear more children.

As DOOL viewers will remember, her inability to have children was a big part of the reason why Gabi wanted revenge on Stefan in the first place, since he was instrumental in helping to send her to prison along with Abigail DiMera (then played by Marci Miller). She carried the resentment toward Stefan for months, until she finally fell in love with him as she was trying to seduce him.

But what if Gabi were to find out after Stefan’s death that she was pregnant? Of course, the odds of a pregnancy for Gabi at this point are slim, but stranger things have certainly happened on DOOL. Pregnancies often occur on soaps after the mom has been told repeatedly that she can’t have children. Could this happen with Gabi?

Of course, we would have to factor in the DOOL time jump that’s coming later this fall. As you’ve probably heard, Days of Our Lives plans to advance storylines by a year, meaning that things will jump ahead a year in advance.

So, if Gabi were to be pregnant, then she’d end up having had the baby off-screen in the year interim. Yes, it would be a little convoluted, but again, stranger things have happened on DOOL.

We’ll see if Gabi ends up with an unexpected pregnancy, but it would certainly be a way to carry on the DiMera legacy, and it would give Kristen DiMera’s (Stacy Haiduk) baby a rival in the years to come!

Do you think that Gabi will wind up pregnant with Stefan’s baby? Stay tuned to DOOL and don’t forget to check CDL often for the latest Days of Our Lives spoilers, updates, and news.