Days of Our Lives Spoilers: Days NOT Canceled – Entire DOOL Cast Released From Contracts – What It Really Means 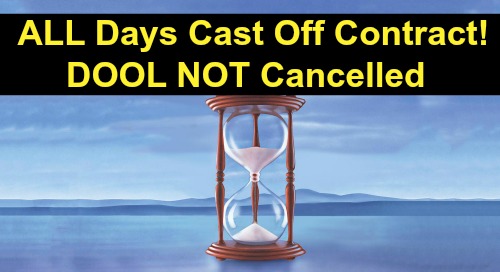 Days of Our Lives Spoilers reveal that earlier today, TV Line posted an article about some goings-on at Days of Our Lives that has many fans scratching their heads. The report stated that the producers of DOOL have released the entire cast from their contracts and that the soap is set to go on hiatus at the end of this month. The article included some doom-and-gloom type comments, including that “the sand appears to be leaking out of the hourglass” and that there is “no guarantee who – if anyone – will return.”

That all sounds pretty lousy, but what’s really going on here? Well, it seems that the report is getting some fans scared about the future of the show, even though what’s actually going on isn’t that remarkable from a business perspective. First off, Days of Our Lives has NOT been canceled. The show is simply up for renewal, which happens every year as a normal process.

And what about the hiatus mentioned in the report? Days of Our Lives is indeed going on hiatus in terms of its production starting at the end of November, but we should note that the show has historically taped at least 5 months in advance, which means that there are currently enough episodes taped so that viewers shouldn’t notice any interruption in their shows over time.

Jason47, who is a very reliable DOOL source, addressed the TV Line report and cleared up some of the confusion. He stated: “With the show going on extended production hiatus, this [the cast being released from contract] is a necessary business move. With most contract cycles only being 13 weeks, and the show going on hiatus for more than 13 weeks, this was the only possible option.”

Jason47 continued: “So, Days fans, don’t look at this as a reason to worry, or a sign that NBC will not renew the show. This is just a necessary business decision. In fact, in the past, actors whose 13-week cycles ended during previous long production breaks, have quietly had their contracts lapse and then sign new ones when the show returns from break. So this is NOT the first time this has happened. It’s just the first time it’s been reported to this degree.”

The bottom line here is that DOOL fans needn’t worry right now. Yes, the show is taking a production hiatus, but there are plenty of shows taped in advance. And the actors’ release from their contracts appears to be a normal course of business given the production hiatus. Don’t forget to check back with CDL for all the latest entertainment news and updates.

We’re not being cancelled. We are pausing production because we are so far ahead of schedule (and it saves us $). Days will still air during the entire hiatus, so you won’t miss anything!