Days of Our Lives Spoilers: Did Xander Betray Eve – Tricked Her Into Giving Jack The REAL Memory Serum?

BY hellodrdavis on July 28, 2019 | Comments: one comment
Related : Days of Our Lives, Soap Opera, Spoiler, Television 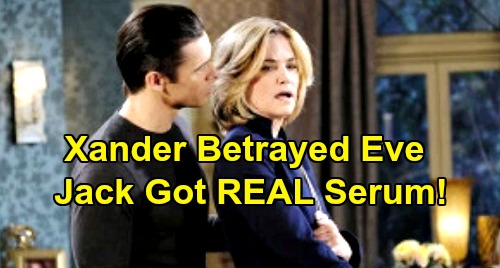 Days of Our Lives (DOOL) spoilers tease that Jack Deveraux (Matthew Ashford) and Jennifer Horton (Melissa Reeves) will soon be feeling both angry and heartbroken. As DOOL viewers know, Eve Deveraux (Kassie DePaiva) recently admitted that she led Jack to believe that she injected him with Dr. Wilhelm Rolf’s (William Utay) memory serum, when in fact she injected him with a placebo, which was nothing more than sugar water.

Jack and Jennifer are going to be furious, but some additional disturbing developments are going to occur that will increase their anger times ten. According to DOOL spoilers, Eve will destroy the vials of the actual serum – meaning the serum that Xander Kiriakis (Paul Telfer) intercepted for Eve when he had the placebo delivered to Jack. That’s a pretty devious move, given that she’s already burned Dr. Rolf’s diary which contained the formula for the serum.

But Jack and Jennifer will have hope when they learn from Kayla Johnson (Mary Beth Evans) that the hospital retained notes on the formula. They’ll try to track down the notes, but in the meantime, Eve will orchestrate a police raid and she’ll gain possession of the notes…and she’ll shred them! That will absolutely horrify and infuriate Jack and Jennifer, and they’ll think that all hope has been lost of Jack ever being able to get his memories back.

But is all hope really lost? We think it’s possible that there could be a big twist coming in this story, and that Eve may have made one huge mistake. After all, she trusted Xander to carry out a very important action…to switch out the real serum for the placebo in the delivery that was sent to Jack. But Xander’s a pretty devious guy, and he doesn’t particularly like Eve, even though he’s done things for her from time to time.

What if Xander pulled a fast one on Eve? He very easily could have decided to make Eve’s life hell and fix it so that Jack would get his memories back…by not really switching out the real serum with the placebo. If Xander didn’t really switch the serums, then it means that the serum that Eve injected Jack with was actually the REAL serum! That would be a stunning twist in this story!

And it that’s the case, then we might just see Jack starting to get flashes of memories, in the same way that Will Horton (Chandler Massey) got flashes of his memories back before they finally all came flooding back at once.

Ultimately, this is just a theory, but it totally seems like something Xander would do, doesn’t it? We’ll have to wait to see whether Xander ever admits to not switching the serums, and whether Jack starts experiencing any memory flashes before we know whether this theory is reality.

Do you think that Xander betrayed Eve and tricked her into injecting Jack with the real serum? Stay tuned to DOOL and don’t forget to check CDL often for the latest Days of Our Lives spoilers, updates, and news.