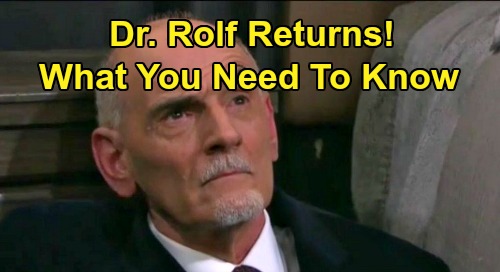 Days of Our Lives spoilers tease that Dr. Wilhelm Rolf will return when William Utay returns and reprises his role with a first airdate on September 3, 2019. Utay has been playing Dr. Rolf off and on since 1997, and the last time he was seen alive was during the Halloween episodes of 2018.

Days fans will recall that was when Kate DiMera (Lauren Koslow) heard that her grandson Will Horton (Chandler Massey) was alive, and it turned out he was alive after being given Rolf’s resurrection serum. Will got his memories back with Rolf’s amnesia serum which gave him some rather severe side effects. In November 2018 Rolf was seen only in flashbacks.

It is unknown at this point whether this appearance by Rolf will also be in flashbacks, or if he is indeed alive. If he is alive, that will be great news for Jack Deveraux, (Matthew Ashford) who wants to get his memories back. Eve Deveraux (Kassie DePaiva) burned Rolf’s diary, and destroyed everything made up serum-wise and had the police raid the lab and shut it down.

That, of course, as Days of Our Lives viewers recall, led to the big blow up of Jack and Eve, her firing as Police Commissioner and their impending divorce and lawsuit.

Wilhelm Rolf was first seen on DOOL when John Black (Drake Hogestyn), Hope Brady, (Kristian Alfonso) and of all people, Kristen DiMera (then Eileen Davidson) traveled to a jungle compound looking for a cure for Roman Brady (Josh Taylor). It would seem there existed a kinder and gentler Kristen back in those days.

Dr. Rolf had been exposed to a germ warfare pathogen while on a deep cover ISA mission. Rolf developed a cure for Roman but the vial of serum was dropped and broken before it could be administered, and Rolf had to start from scratch. At that point a search for a special orchid which contained the ingredients Rolf derived the serum from began.

Hope and John set off on a search for the orchid, and found it. He put it in his backpack but then was pushed off a cliff and Hope, Kristen and Stefano DiMera (Joseph Mascolo) thought he was dead. Hope found some seeds from the special orchid and brought them to Rolf, and he engineered a serum that cured Roman. Of course, John survived the fall off the cliff and despite many other things happening to him since is alive and well today.

Flash forward to 2018, and Rolf is alive, having been resurrected with one of his own serums by Kristen. The door with his initials in the “resurrection warehouse” turned out to be his lab. He was working on more resurrection serum since there were a number of people “holding” that Kristen wanted resurrected.

Rolf accidentally knocked over some beakers which ignited, causing a fire. The last time he was seen he was alive, with Kristen, who wanted to look for Brady Black (Eric Martsolf) in spite of Rolf’s objections. Days of Our Lives spoilers say there is a good chance that Dr. Rolf is alive.