Days of Our Lives Spoilers: Eli Breaks Up With Lani Over Baby David – Bond With Rafe Turns to Romance?

BY hellodrdavis on May 26, 2019 | Comments: one comment
Related : Days of Our Lives, Soap Opera, Spoiler, Television 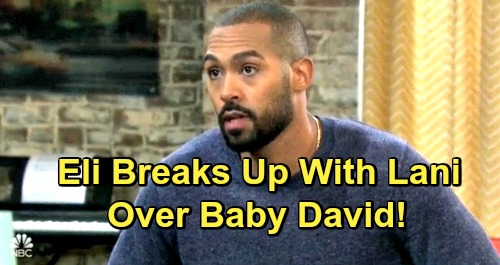 Days of Our Lives (DOOL) spoilers tease that Lani Price (Sal Stowers) is in for a big shock. Lately, she’s been spending most of her time with Jordan Ridgeway’s (Chrishell Hartley) baby, David Ridgeway. Since Jordan’s in Bayview and can’t care for him, Lani has basically taken over the role of primary caretaker for the infant, along with Rafe Hernandez (Galen Gering).

But Lani’s decision to take a parenting role for David has caused some difficulties in other areas of her life. For one, it has interfered with her ability to work full-time, and she ended up taking a leave of absence from the Salem PD in order to care for David. She’s even moved into the Hernandez house so she can spend all of her time with David.

Lani’s decision to spend all of her time with David has also caused a big problem between her and Eli Grant (Lamon Archey). Eli was understanding about Lani’s desire to watch David at first, but then Lani seemed to be growing awfully attached to him, and Eli expressed concern about the situation to Lani. That didn’t go over well with Lani, and the two have been arguing about it ever since.

Of course, Eli is concerned that Lani may be projecting feelings for the baby that the two of them lost last year onto David. But the mere suggestion of this angers Lani, and they haven’t been able to have a civil conversation about the matter at all. The whole thing has completely put a damper on their relationship.

Mostly, Eli just misses his girlfriend, and Days of Our Lives spoilers say that he’s finally going to get fed up with fighting for their relationship and competing with David for Lani’s attention. Ultimately, Eli will break things off with Lani.

And that leaves us wondering whether TPTB are ending “Elani” for good. It certainly seems that this could be the case, especially since Lani and Rafe have been spending a lot of screen time together as they’ve been caring for David. Of course, Rafe’s marriage to Hope Hernandez (Kristian Alfonso) is over, so both Rafe and Lani will be single.

Further, Rafe and Lani will have a common goal…to take care of David. That could produce a strong bond between them going forward, and it’s quite likely that we might see a relationship form between them down the line. Of course, we have to also consider that someday Jordan will likely be back to claim her son, which could be difficult for them to contend with, but by that point their relationship may be formed.

At any rate, since Rafe and Lani will both soon be single with a baby to bond them, it’s sure looking like they might get together. Would you like to see a Rafe/Lani pairing? Stay tuned to DOOL and don’t forget to check CDL often for the latest Days of Our Lives spoilers, updates, and news.