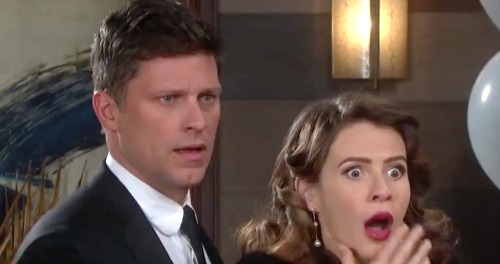 Days of Our Lives (DOOL) spoilers tease that Eric Brady (Greg Vaughan) will face a whirlwind of emotions. He’s already been through a lot since Nicole Walker (Arianne Zucker) was presumed dead in that warehouse fire. Eric went through the excruciating grief of losing the love of his life. He found comfort in Sarah Horton (Linsey Godfrey), but the brakes were pumped when “Nicole” suddenly returned.

Unfortunately, Eric’s joy over their reunion turned to heartbreak over Holly Jonas’ (Harlow and Scarlett Mallory) “death” and more heartbreak over “Nicole’s” rejection. That was only the tip of the iceberg since Sarah married Rex Brady (Kyle Lowder) and twisted the knife. Although Sarah ultimately changed her mind, this Days relationship is still troubled. Eric and Sarah’s issues are about to get far worse!

Days of Our Lives spoiler say Eric will be floored when “Nicole” is revealed as Kristen DiMera. Her exposure will come courtesy of John Black (Drake Hogestyn), and it’ll be a very public one. DOOL fans can expect Eric to reel as Kristen’s mask comes off. He’ll flip out even more once Kristen pulls a gun on his mother, Marlena Evans (Deidre Hall).

After Xander Cook (Paul Telfer) insists Holly is alive, Eric will have plenty of questions. Of course, he’ll also want to give Kristen a piece of his mind. This is the same woman who drugged Eric, raped him and made a sex tape that got him defrocked. The same woman who’s targeted Eric’s family time and time again. Eric already had every reason to hate Kristen’s guts, but his rage will rise to another level.

Eric loved Holly like she was his own daughter, so it killed him to think he let her down. He was devastated by Holly’s “death,” but watching “Nicole” suffer was perhaps even worse. Eric will be livid when he realizes the lengths Kristen went to. He’ll unleash his wrath like never before and demand to know where Holly is.

It looks like Kristen may have some info on the real “Nicole’s” location as well. Kristen hasn’t revealed that so far, but she’s likely just been keeping it close to the vest. It’s a good thing too since Xander will sing like a canary! Kristen will have an ace in the hole – or a couple of them if she can offer the scoop on both Nicole and Holly. She’ll try to cut a deal, but not before she faces Eric’s intense rage.