Days of Our Lives Spoilers: Eric Fears Sick Mickey Will Die – Rips Into Nicole for Robbing Him of Precious Time? 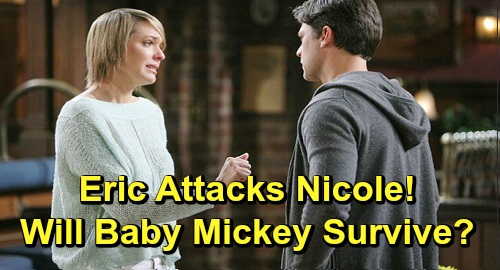 Nicole was afraid that Eric would drift back in Sarah’s direction, especially since Sarah could offer the one thing she couldn’t. Since Nicole can’t give Eric a baby of his own, she let fear take over and left him in the dark. Nicole knows things look bleak now, but at least she finally volunteered the truth. Soap secrets are often forced out, so it’s refreshing that Nicole actually chose to come clean.

Even so, Nicole is terrified that she’s going to lose Eric forever. Days of Our Lives spoilers say Nicole will meet with Eric during the week of December 2-9. She’ll give her love an emotional plea and hope it can somehow fix this. Nicole realizes she can’t turn back the clock or restore Eric’s faith in her overnight. However, she’ll beg for a chance to move forward and regain Eric’s trust.

Days of Our Lives spoilers hint that Eric may not be ready for that. He’ll have cooled off by then, but forgiveness probably won’t be that simple. It’ll probably take patience on Nicole’s part to get this romance back on track. There’s a chance things may get worse for Nicole before they get better. That’s because Mickey has a medical crisis coming up, which may leave Eric concerned that he’ll lose her.

Eric just now found out he even has a daughter. He’s going to be crushed at the thought of potentially having so little time with Mickey. Days of Our Lives spoilers say Nicole will reach out to Eric again during the week of December 9-13. She’ll try to comfort Eric over Mickey’s diagnosis, but the key word there may be “try.” The fact that Nicole’s trying to comfort instead of just comforting is a warning sign.

That suggests Eric will reject Nicole’s support and could perhaps rip into her instead. It’s easy to see why Eric would do that. He’ll be looking for someone to blame in that moment, so Nicole may face Eric’s wrath once again.

Days of Our Lives spoilers say Nicole’s hope for the future may fade fast, but she shouldn’t give up! It seems likely the babies were switched, so this kid probably belongs to Kristen DiMera (Stacy Haiduk) and Brady Black (Eric Martsolf) anyway. Once Mickey recovers and the whole story’s exposed, Eric may lean on Nicole and find a path forward with her. We’ll give you updates as other Days news comes in. Stay tuned to DOOL and don’t forget to check CDL often for the latest Days of Our Lives spoilers, updates and news.