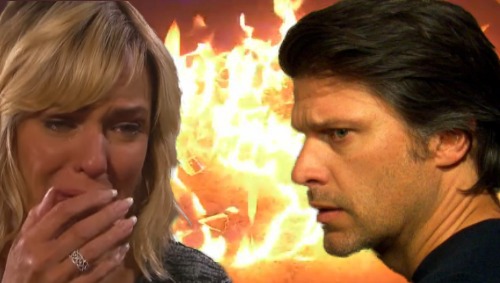 Days of Our Lives (DOOL) spoilers tease that Eric Brady (Greg Vaughan) could end up caught between an old love and a new one. Nicole Walker (Arianne Zucker) is arguably Eric’s soul mate, so his feelings for Sarah Horton (Linsey Godfrey) can’t really compete. However, things could be awfully complicated once Nicole reenters the picture. Everything may hinge on why Nicole’s been away.

Nicole is headed back to Days starting April 25, so now’s a good time to prepare for what’s ahead. If Nicole’s been recovering from her injuries somewhere or has been held against her will, it’s a no-brainer for her to get back together with Eric. He’d surely snatch Nicole up again in a heartbeat.

If DOOL tries to sell Sarah as serious competition for Nicole, it’ll be an epic fail. Sarah and Eric’s flirting has been fun, but it’s not like the deep love Eric and Nicole shared. That doesn’t mean Days of Our Lives won’t go that route, but it won’t be believable at all if they do.

There’s another option though and it might make more sense. The show needs to level the playing field here. What if Nicole willingly faked her death? After all, Nicole feared she’d never escape her mistakes and connection to Xander Cook (Paul Telfer). At home, she pushed Eric to take Holly Jonas (Harlow and Scarlett Mallory) and raise her as his own. That was before the explosion ever happened.

Of course, Eric assured his love that they would be together and build a family. He refused to let Nicole give up, but she was forced to thanks to that warehouse fire – or was she? Did Nicole decide to carry out her plan after all? She might’ve found an exit at the last second and opted to just let Eric raise Holly.

It didn’t go down like that due to the letter Nicole wrote beforehand, but she might’ve thought she was doing the right thing. As she watched the building crumble, Nicole may have believed her child was better off without her. Xander might’ve even run into Nicole on the way out and forced her to disappear. It’s not like Nicole was giving him the sex he wanted, so he had no use for her.

Xander’s the kind of guy who would enjoy the idea of Nicole and Eric suffering. This twisted sort of plot is right up his alley. Even that scenario might be tough for Eric to get past. He could feel like Nicole should’ve come to him secretly and relied on his help. Whether Nicole did this on her own or as part of Xander’s scheme, Eric would be deeply hurt that she let him grieve.

That could actually give Sarah a fighting chance with Eric, but for how long? Days of Our Lives spoilers hint that Eric may not be able to resist Nicole forever! Nicole will definitely show up alive somehow, so stay tuned. We’ll give you updates as other Days news comes in. Stick with the DOOL and don’t forget to check CDL often for the latest Days of Our Lives spoilers, updates and news.