Days of Our Lives Spoilers: Eric On Daddy Duty Following Nicole’s Confession – Bonds with Mickey, But She’s Not His Daughter After All? 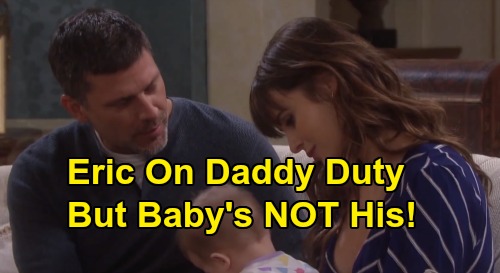 Days of Our Lives (DOOL) spoilers tease that Nicole Walker (Arianne Zucker) may not be able to take the guilt for much longer. She’s in a happy relationship with Eric Brady (Greg Vaughan), but she’s keeping a life-changing secret from him. Nicole knows Sarah Horton’s (Linsey Godfrey) baby belongs to Eric, not Xander Cook (Paul Telfer).

Of course, Sarah shares guilt here since it’s her child and she could’ve told the truth at any time. This isn’t all on Nicole, but her lies may matter more since Eric committed to her. Nicole should’ve trusted in their love and divulged the baby’s paternity from the moment she learned it. She’s had plenty of other chances to come clean as well, so Eric’s going to have a huge problem with her silence.

During the week of November 25-29, Days of Our Lives spoilers say Eric will prepare for the future. He’ll fill Roman Brady (Josh Taylor) in on his plans before giving Nicole a surprise. It certainly sounds like a proposal could be brewing, which could be what prompts Nicole’s confession. It’s easy to imagine Eric asking Nicole to marry him and getting a rather confusing reply.

Nicole may suggest that she has to tell Eric something first. If Eric still wants to marry her afterward, Nicole might insist she’d love nothing more than to be his bride. However, it’s time for the truth to come out. Nicole can’t stand watching Xander raise this child knowing it’s Eric’s…except it probably isn’t.

Days of Our Lives spoilers say Nicole will shock Eric with a major revelation on November 25. If that seems awfully quick for this DOOL big reveal, it’s because it’s not the biggest one of all. Nicole may tell Eric that he’s the father of Sarah’s baby, but there’s a good chance Xander swapped Sarah’s dead kid with Kristen DiMera’s (Stacy Haiduk) healthy one.

In other words, Mackenzie “Mickey” Horton is likely the baby Brady Black’s (Eric Martsolf) been distraught over losing. Let’s consider how this might play out. Eric will naturally be hurt and furious over Nicole’s deception. He’ll feel the same anger toward Sarah, who let Xander claim her baby as his own.

Once Mickey returns home from a kidnapping crisis, Days spoilers say Eric may take over Daddy duty. He’ll undoubtedly want to be in Mickey’s life. Sadly, Eric should face another devastating blow down the road. If this storyline plays out like DOOL spoilers say it will, Eric will probably learn Mickey isn’t his kid after all. Sarah should face that shocker as well, so this is certainly something they could bond over.

Will the death of Sarah and Eric’s child bring them closer? Will Nicole have to wait for another chance with Eric? We’ll give you updates as other Days news comes in. Stay tuned to DOOL and don’t forget to check CDL often for the latest Days of Our Lives spoilers, updates and news.