Days of Our Lives Spoilers: Eric Shows True Colors When Brady Reveals He’s Back With Nicole – Sarah Struggles With Insecurity

BY hellodrdavis on August 11, 2019 | Comments: one comment
Related : Days of Our Lives, Soap Opera, Spoiler, Television 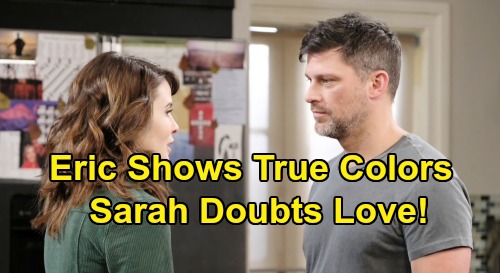 Days of Our Lives (DOOL) spoilers tease that Eric Brady (Greg Vaughan) will soon get some frustrating news. As DOOL viewers know, he’s been through quite a bit in the past few months. First off, his true love Nicole Walker (Arianne Zucker) came back from the dead, then hurtfully broke things off with him after her daughter Holly Jonas (Harlow and Scarlett Mallory) died in a car accident after being kidnapped.

Now, DOOL viewers know that Nicole is actually Kristen DiMera (Stacy Haiduk) in disguise, and that Holly didn’t really die, but as far as Eric knows, the real Nicole can barely stand to look at him. So, Eric has made the decision to move on with Sarah Horton (Linsey Godfrey), whom he’s been in love with for a while. And there’s certainly been drama there, given that Eric broke up Sarah’s marriage to his brother Rex Brady (Kyle Lowder).

Well, it looks like more drama is coming Eric and Sarah’s way. DOOL viewers will remember that before Eric broke up Sarah and Rex’s marriage, he broke up Nicole and Brady Black’s (Eric Martsolf) relationship. That led to a huge rift between Eric and Brady that still isn’t completely healed. And to make things even more complicated, now Brady is back together with Nicole (who is actually Kristen), and he’s going to have to break the news to Eric.

It doesn’t look like that revelation is going to go particularly well, for more than one reason. According to Days of Our Lives spoilers, Brady will gather his courage and confess to Eric that he’s officially back with Nicole. Eric will surely be rattled by the news, and it’s certainly not going to result in brotherly harmony.

But the news is also going to end up having a big impact on Sarah as well. Sarah will certainly notice how bothered Eric is by Nicole’s decision to be with Brady again, and it will probably make her worry. After all, she knows that Nicole was the love of Eric’s life, and the fact that he’s upset by Nicole being with Brady will tell her something…that Eric is still harboring deep feelings for Nicole.

And according to DOOL spoilers, Eric’s reaction to Brady’s news will really get inside Sarah’s head. Of course, she might be remembering Rex’s parting words to her…that he hoped that Eric doesn’t end up breaking her heart. Look for a period of insecurity for Sarah as she reels from Eric’s reeling over Brady’s reunion with Nicole.

It will be interesting to see how Sarah and Eric’s relationship fares now, and how Sarah handles her insecurity. Do you think that their relationship will make it? Stay tuned to DOOL and don’t forget to check CDL often for the latest Days of Our Lives spoilers, updates, and news.