BY hellodrdavis on April 1, 2019 | Comments: one comment
Related : Days of Our Lives, Soap Opera, Spoiler, Television 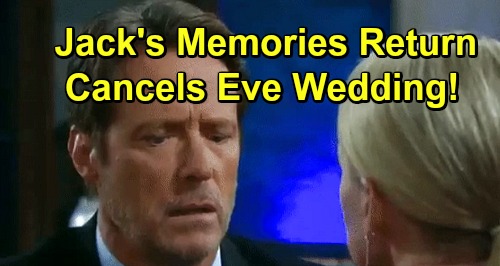 Days of Our Lives (DOOL) spoilers tease that Jack Deveraux’s (Matthew Ashford) family will soon get a shock. They’ve been enduring Jack’s heated mayoral campaign for weeks, which includes his strong stance against Haley Chen (Thia Megia), who is an undocumented immigrant. He and Eve Donovan (Kassie DePaiva), his campaign manager, have seen to it that Haley is on the path to deportation, and Jack’s family doesn’t like it one bit.

Jennifer Horton (Melissa Reeves) and JJ Deveraux (Casey Moss) have had about enough of Jack’s mayoral nonsense, and they’re totally fed up with Eve’s disastrous influence over Jack. Jack is doing things that he never would have done before his “death,” and they can’t imagine how it could get worse.

Well, according to Days of Our Lives spoilers, it will get worse. It looks like Eve is going to decide that Jack’s chances of getting elected mayor would be better if he had a “Mrs. Jack Deveraux” at his side. She’ll convince Jack that the two of them should be married – after all, they make a great team – and she’ll decide to announce the planned nuptials at one of Jack’s campaign rallies.

Of course, this will absolutely horrify Jennifer and JJ, but they won’t be able to do much about it. If Jack wants to marry Eve, then that’s his choice. But will he really want to marry Eve when the time comes to say “I do?” He may not, because according to Days of Our Lives spoilers, some of Jack’s memories are going to start to flash back to him!

It sounds like Jack’s memories will start to come back slowly and erratically, much like Will Horton’s (Chandler Massey’s) memories initially came back – in little flashes here and there. Jack might not think much of it at first, as he remembers bits and pieces of his life. It probably won’t be enough to make him remember his love for Jennifer and his family, but it may be enough to make him wonder whether marrying Eve is such a great idea.

Or, Jack might just plug on ahead with his plans, in typical Jack fashion. But if he goes the same route as Will did, then at some point all of his memories will come flooding back in one fell swoop. With Will, it happened at Marlena Evans (Deidre Hall) and John Black’s (Drake Hogestyn) wedding. It would be great if the same thing happened to Jack before the wedding to Eve takes place, or even during the wedding.

It would certainly be a great DOOL moment to see Jack refuse to marry Eve all of the sudden, as a result of his memories flooding back. Jack and Jen fans would be thrilled by that turn of events for sure. Do you think that Jack will get his memories back before he makes the huge mistake of marrying Eve? Stay tuned to DOOL and don’t forget to check CDL often for the latest Days of Our Lives spoilers, updates, and news.